St. Julien Lachicotte McCall of the Mountain Lake community in Lake Wales, Florida and Pawleys Island, South Carolina, formerly of Cleveland and Darien, passed away peacefully in Florida on Aug. 17 with his three children by his bedside.He was 100. 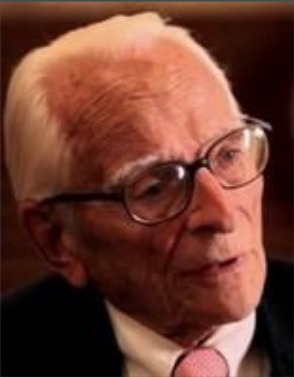 Born April 1, 1921 in Florence, South Carolina to Julia Lachicotte McCall, who lived 102 years, and Arthur May McCall, Julien graduated from Florence High School, Davidson College in 1942, and Harvard Business School in 1947 and received an honorary Doctor of Laws degree in 1983 from Davidson College.

He served as a Captain in the U.S. Army, Ammunitions, in North Africa and Italy (Monte Cassino and Anzio) from 1942 to 1946.

Mr. McCall served as a director at various times in his career of 15 business corporations, including Progressive Corp., Brush Wellman Corp., Atlas Copco, and Acme Steel Co., as well as a trustee at The Ethel Walker School, Davidson College, and Case Western Reserve University. From 1985-87, he served as a member of the Federal Reserve Board’s Federal Advisory Council.

FINANCE Magazine named him “Banker of the Year” in 1978. OHIO BUSINESS Magazine featured him as “Ohio’s Top Banker” in 1984.

On a civic level, he was a Trustee of United Way, Boy Scouts of America, Cleveland Museum of Natural History, St. Luke’s Hospital, Cleveland, and chairman of Playhouse Square Foundation, the largest performing arts center in the United States after Lincoln Center in New York City.

In 1980, he was given The Israel Humanities Award and Prime Minister’s Medal for assisting Israel in selling bonds in the United States.

He was predeceased by his loving wife of 56 years, Janet Jones McCall, in 2006. Mr. McCall also leaves behind his beloved miniature schnauzer, Schatzi, the last of a lifelong devotion to his precious dogs.

He was born and raised a devout Christian in the Episcopal Church. One of his ancestors raised the money to build the old church, All Saint’s, Waccamaw, in Pawley’s Island, South Carolina, where the funeral will be held at 11 a.m. on Thursday, Aug. 26, with interment in the church cemetery.

In lieu of flowers, contributions to Mountain Lake Community Service Inc. in his name would be so appreciated (P.O. Box 832, Lake Wales, FL 33859).

Written and submitted by his daughter, Alison G. McCall.

— an obituary from Marion Nelson Funeral Home, where online condolences may be left

Each high schooler only has four summers in New Canaan. This year the class of 2015 graduated on June 18, giving teenagers 70 full days of summer, until the Aug. 27 back-to-school start date. New Canaan teens have about 280 days of summer in total through their high school years to try and experience new things, boost their college resume, and most importantly have fun. Factor in the snow days that add extra dates to the school calendar, the fall sports preseason that take up a week of the sunshine, and doctors appointments that parents have decided to squeeze in before the school year, there really isn’t that much time for high schoolers to experience everything that New Canaan has to offer throughout the summer. Here’s a list I came up with of adventures, opportunities, and experiences that all high schoolers should take advantage of in New Canaan, whether these tasks can be completed in the remaining weeks of this summer or will have to wait until next summer.

10 Tips Every NCHS Senior Should Know About The College Process

It’s August. The Common Application opened about two weeks ago and it’s most likely the last thing that rising high school seniors want to have to worry about. Having gone through the process last year, I understand what it’s like to have your parents nagging you about getting your applications finished, teachers and guidance counselors reminding you of certain deadlines, and friends gossiping about what school everyone wants to go to. Although the process may not seem so easy the summer before the application craze begins, there are many tips that I have that can make the college process much easier. 1.

For this installment of Biz on Biz—a chance for local business owners and workers to tell us about a favorite product or service from a fellow merchant—we caught up with South Avenue mainstay Mackenzie’s. When we decided to to take a look inside the newspaper, candy, greeting card, and office supply store, we spoke with owner, Jim Berry, to find out about his favorite places in New Canaan. Immediately Berry responded telling the New Canaanite that he liked all of the restaurants in New Canaan. “Well I like the restaurants,” Berry said. “They are all very good.”

Although Berry likes all of the restuarants in town, Ching’s Table would have to be favorite.

The plan to rebuild with greater density the public housing units “up the hill” at Millport Avenue has gained traction since last November. The New Canaan Housing Authority board has held regular meetings—there’s another one scheduled for 5:30 p.m. Wednesday—to discuss and prepare for the physical work, when families that reside there will face a dramatic if temporary change in their lives. Some time soon, these New Canaanites will move into new units built within an expanded footprint at Millport while their homes are razed and rebuilt.

Although this will be adjustment for the residents of Millport, many are excited about the upside of the project, according to New Canaanite Kara Laviola. As a resident there trusted by her neighbors and well-attuned to what’s happening, Laviola has been appointed a resident representative during the project. We spoke to her about the rebuilding and her experience living in New Canaan. Here’s our conversation.

Many New Canaanites spend their summer relaxing by the pool—especially one in particular: Waveny pool. An increasingly popular Dog Days destination, especially during the sustained hot days that New Canaan is seeing this week, the Waveny pool through the summer hosts a whole range of activities: The Waveny Gators teams welcome children ages 7  to 17 to participate in swimming and diving teams, and children 10 to 13 to be a part of the water polo team. During their season, the teams practice each morning, and participate in meets against the Roxbury Club, Rocky Point Club, Roton Point Club, Middlesex Club, Shore & Country Club—the Gators finished up recently with a meet against Newfield Swim Club (summer home of NCHS math teacher David Fine). Kids’ athletics are held in the morning and the pool tends to get busier for visitors in the afternoons, according to Recreation Director Steve Benko. “The best time [to go to the pool] is probably in the afternoon, around 2 o’clock.