One year ago, New Canaan boys cross country head coach Bill Martin entered the preseason optimistic that his group of boys were in for a season full of promise.

Yet after injuries plagued much of the team from preseason all the way through to the postseason contests, that promise never materialized.

“Our strength last year was in a couple of sophomores, Max Koschnitske and Alex Urbahn,” Martin told NewCanaanite.com. “But both Koschnitske (broken collarbone) and Urbahn (wrist) suffered debilitating injuries at the start of the year in separate mountain biking accidents, which set us back as a team. We finished 10th in the FCIAC’s, which was very disappointing. We had one of our near guys race toward the back of the pack [in FCIACs] and as a result we had to rely on a guy who should’ve been our eighth guy but instead was our seventh. And other guys got hurt on the day of the race. So we were totally shot. Every team goes through their stuff but we just weren’t deep enough to handle that adversity.” 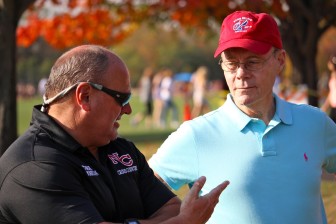 New Canaan boys cross country head coach Bill Martin (left) is eager to get his team back out on the trails in 2016. Credit: Terry Dinan

But with a new year about to get underway, Martin proclaims the Rams as “back to full strength.” And that bodes well for the 2016 team’s chances this cross country season. 52 boys have trained with the team this preseason with the crop of talent fairly well distributed throughout each grade level—10 seniors, 17 juniors, 13 sophomores, 12 freshmen.

But when it comes to the heart and soul of this team, it originates in its three senior captains—Jake Grigsby, Abhinav Pal, and Michael St. George.

“All three captains are four-year cross country and track competitors,” Martin said. “Which is the first time I’ve ever had three captains who have been with me all three competitive seasons (cross country, indoor and outdoor track) since they were freshmen. Those guys all know what the expectations are—the way we run our program, the work that’s expected of them, the off-season and all the aspects that type of training entails.”

Their collective experience gives the team that’s running with them people to follow and emulate, both on and off the course. And while the overall result of last year’s FCIAC’s was disappointing for Martin and his squad, St. George’s efforts in the 5K race on that late-October day, clocking a time of 17:21 (36th overall) and being the first Ram to cross the finish line, gave Martin something good to take with him from that event.

But does the cross country veteran have another level for him to take it to in 2016?

“I hope he does,” Martin said with a smile. “That’s the expectation.” 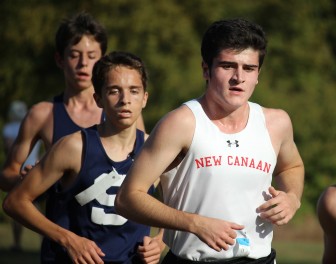 New Canaan senior tri-captain Michael St. George, along with his fellow captains Abhinav Pal and Jake Grigsby, look to help steer the Rams back on course in 2016. Credit: Terry Dinan

But while St. George and his fellow co-captains Pal and Grigsby are poised to fill three of Martin’s top-seven spots for the all important meets, that still leaves four spots up for grabs. Among those who have the inside track on capturing those are the aforementioned Koschnitske and Urbahn, now juniors, who Martin feels the team will see, “the biggest improvement from.” Then you have fellow juniors Henry Asker, Faustino Cortina and Corbin Basile, in addition to senior Jack O’Connor.

Basile is an intriguing newcomer to the program, and school district. After previously attending and competing for the Hyde School, a private boarding school with locations in Woodstock, Conn. and Bath, Maine, Basile transferred into the high school. At the very least, he brings a wealth of prior running experience with him to his new team—something Martin knows you can never have enough of.

“In order to determine what caliber he [Basile] is will take some competitions,” Martin commented. “But it’s always nice to have a new guy with experience—hopefully he’s a gem.”

Another ‘newcomer’ to the program that Martin believes could warrant consideration for a top-seven spot at some point is Drew Pohle, who is new to the cross country program but not to Martin as he coached him for the first time back during the spring track and field season.

Having all of this intriguing and promising talent will be necessary for the boys to stand a good chance at competing in the much heralded FCIAC.

“The FCIAC’s always strong at the top, which is the problem,” Martin said with a smile. “The conference usually sends four or five teams all the way to New England Regionals, and usually at least three of those finish in the top-ten. So, at least in New England, we have the strongest league in the region. But you’re talking about Ridgefield, Danbury, Staples, all programs who were top scorers at the New Balance Cross Country Nationals [last year]. So it’s a very competitive league. That’s something we have to manage. We don’t have a break with any meet. There’s not one let-up in our schedule.”

But what will likely play the largest role in determining how the Rams fare in 2016 is how much, or little, the injury bug bites at them.

“We have to manage our injuries and all those types of things because every team will have them,” Martin said. “And then the fatigue factor comes into play as well. It’s a short season and the varsity guys will probably have been running all summer by the time postseason rolls around. So you’re talking about a four month stretch of running for those guys. So we’ll just have to know what the right amount of work and give and take is so that they can do well all the way through FCIAC’s and states. We’ve got a lot of motivation based on how last year finished.”