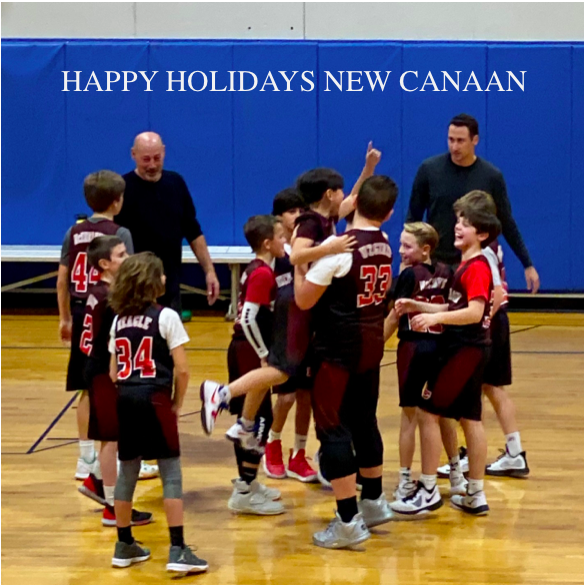 Winter, received by some with dread and others with glee. A season when the birds have flown away, trees grow bare, with the days ever shorter consumed by cold air. And yet, a wonderful transformation occurs round this time of year. The autumn palate replaced by the majesty of winter’s white, lifts our town and its folk with a new sort of merriment—the holiday season, a time for joy and celebration.

The change in season also marks the start of basketball, a great winter sport. For those of us who support New Canaan Youth Basketball, our good cheer and hopes are raised each time we watch the kids play.

The New Canaan Basketball Association’s Sixth Grade Boys Black team captured its first Fairfield County Basketball Championship as fifth-graders and began their title defense last weekend in a most appropriate setting—the Darien Middlesex Gymnasium. It is here where the boys suffered their worst defeat by more than 25 points against Darien, and here where they won the championship against Westport.

The rhythm of sports in New Canaan doesn’t allow for much preparation as football folds right into basketball. Many of these boys seemed to be taking off their football pads and helmets just in time for the first game this past weekend. Coach Billy and his father Coach Devito, new to the team, are making their own transition by getting to know the boys and their talents while putting their own system in place. Despite these challenges, the coaches and the boys seemed ready to take on their rivals who dominated them last season, the Darien YMCA. How does the saying go? “Competitors just compete”—how perfectly concise.

Darien took an early lead pressing right from the tipoff. Turnovers ensued and the good cheer turned into more colorful “bah-humbugs” from New Canaan supporters. But NC Black found their tidings of good joy in James McInerney with his tenacious rebounding and newly refined offensive touch leading the team to a first quarter 9-7 lead. Darien responded and took over from there, opening a lead as wide as 12 points in the second half. But, just like the trees going up around town and the beautiful ornaments adorning them, these New Canaan sixth grade boys began to light up the court with their play. Benny Heagle whose hoop skills and hair flow with such personal basketball style, slashed to the hoop with a scoring drive. A little HO-HO-HO from Dylan Ho who penetrated from the point to add to NC scoring. The holiday “dish” from Mason McClave to Colin McKiernan had its own magic touch, and a teardrop candy cane floater from Brendan Bailey kept the game close as time wound down. With less than 1:30 to play, Brody Towers drained a clutch three pointer to tie the game, sending the crowd into a Xmas morning frenzy. Darien responded with a beautiful running jumper from their best player, Ben Rolapp giving Darien a 34-32 lead with just under a minute to play.

Competitors just compete—I’m always amazed when young kids live that out. It’s not something you teach, it’s in their DNA. Taking the inbound pass, Towers raced down the court and found Will Wunderlich under the basket. Playing the percentages, Darien fouled. With the game on the line, Wunderlich, which means “wondrous” in German, knocked down both free throws sending the game into overtime; the same kind of wonderful as Will showed in the championship game last season. Comebacks, like stocking stuffers, are most appreciated when the outcome is unexpected. Losing by double digits late into the game, needing two fee throws to send the game into OT, and then shutting down one of the best teams in the league for the last 5 minutes is truly unexpected. Winning the season opener with McInerney knocking down a jumper just inside the 3 point line, followed by the winning basket coming from a great post move from Peter Uzgeris, that’s holiday magic.

Thank you New Canaan Boys—wishing each and every member of our beautiful community tidings of great joy and good will toward one another.