Citing a next-door neighbor’s concerns about a proposed 20-foot-high garage that would sit entirely in a side yard setback, zoning officials on Monday rejected a Ponus Ridge man’s bid to locate the freestanding structure alongside his 1963-built home. 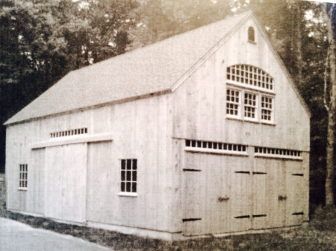 The freestanding garage model favored by the Finnigans of Ponus Ridge.

John Finnigan of 366 Ponus Ridge told the Zoning Board of Appeals at its regular meeting that only sensible place for the post-and-beam, two-bay garage was on the south side of his 2,200-square-foot home at 366 Ponus Ridge.

Saying his hardships were a one-acre property in the two-acre zone, and that his current driveway cannot be moved around to the roomier side of his home because of leaching fields located there, the homeowner sought a variance that would locate the garage 12.2 feet from the property line in lieu of the required 35.

ZBA member John Mahoney said he understood that the placement of the home on the lot was a problem and that he’s “somewhat sympathetic” to the problem of relocating the driveway at great expense, “I do struggle with the amount of the ask in that the whole thing is sitting inside the setback.” 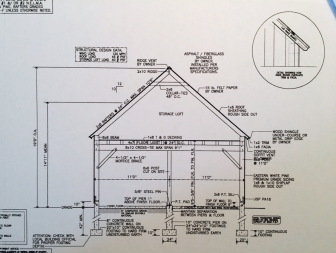 Part of a site plan for a proposed 2-car, freestanding garage at 366 Ponus Ridge.

The ZBA voted 5-0 against granting the variance at its meeting, held in the Sturgess Room at the New Canaan Nature Center.

The board members aksed whether the homeowner had talked to his neighbors (yes), whether it’s a one-car garage (no, two-car), whether the property includes a well (yes, though it isn’t clear just where it’s located), how tall is the proposed garage (nearly 20 feet at its peak) and whether the garage has a room above (yes, it would include electricity and a ping pong table for the homeowners’ three boys).

Members of the ZBA also tried to figure out whether a different configuration would work for the homeowner, such as placing the garage not toward the side yard but deeper into the property itself. The homeowner replied that no, it would sit too close to the patio then to be desirable. Asked whether the patio could be moved, he replied that it wasn’t feasible since it’s made of brick.

ZBA alternate Luke Tashjian asked point-blank whether the homeowners had a hardship in terms of re-organizing their physical driveway to a less crowded side of the house beyond the amount of money it would take.

The homeowner told the ZBA that his family’s long-term plan was to convert the existing garage into a larger kitchen, and that adequate screening existed between his property and his next-door neighbor’s.

“Our neighbors have a fence that is about five feet [high] and arbor vitae trees that are probably eight feet above the current 5-foot lattice fence, and so there is some screening, and then on the other side of the arbor vitae there are tall, 2.5-story white pines which are leggy,” he said.

His neighbors to the south, the Rhees, said they were concerned about the impact that the proposed garage would have on property value. Duk Wun Rhee added that the homeowners were remiss in their notification of the proposed garage—in that they misspelled his family’s name and failed to provide supporting documentation, as promised—and called their attitude about the project “blasé.”

“When a part of a building overhangs or encroaches into the required space is one thing, but an entire building placed in a space deliberately and for no reason other than convenience, this proposal is an outright violation and blatant disregard of the zoning regulations,” Rhee said.