The conspicuous commercial space located at a corner of Elm Street and South Avenue, long occupied by Sallea Antiques, will not be vacant for long after that shop closes its doors in the coming weeks. 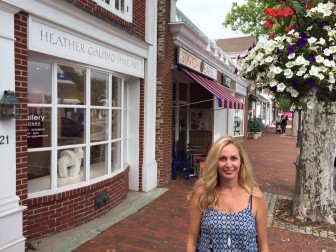 Heather Gaudio, owner of Heather Gaudio Fine Art, which is moving to a more visible space on the corner of South and Elm in about two months. Credit: Michael Dinan

Heather Gaudio Fine Art, for four years located a bit further down South Avenue, is set to move in as early as September.

The promotion last week of four New Canaan Police Department officers includes this singular footnote: In making lieutenant, Carol Ogrinc becomes the first-ever woman in the NCPD to achieve that rank, according to the chief. 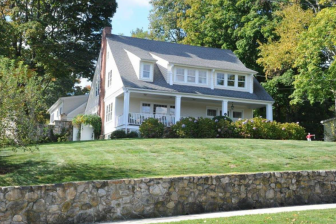 Though the formal paperwork isn’t in just yet at the Town Clerk’s office, we’re hearing that the stately Colonial at 275 Main St. closed last week for $2,540,000—it was on the market for about four months.

The Board of Selectmen on Tuesday approved $5,600 in transcript fees that the town was obligated to pay in connection with the recently concluded trial board hearing of a police sergeant.

Bit of news here on how things are developing up at the former Huguette Clark mansion and estate on Dan’s Highway: The town on June 25 received a building permit application for $72,000 in interior renovations, to convert an existing cottage apartment into a gym.

Congratulations to the New Canaan Girls 12U Softball team, which rolled past Darien 13-0 in a 4-inning “mercy rule” win in the deciding game of a best of 3 series to capture the Little League District 1 crown. Locals will recall that after beating Darien 13-6 in Game 1 of this best-of-three series, New Canaan had to forfeit that win because an ineligible 10-year-old had played in that game. Here are some highlights from the District 1 Tournament—good luck to the girls in the next round:

Police say they’re close to making an arrest in the case of suspects who paid for goods at a recent Oenoke Lane tag sale with counterfeit bills. The suspects have been arrested in Newtown for a nearly identical crime, police said.

The New Canaan Republican Town Committee will hold a Candidates’ Forum at 7 p.m. on Monday, July 13 in the Community Room of the New Canaan Nature Center. The Forum is designed give Republican voters an opportunity to meet and preview the contested petition candidates who will be on the ballot at the Republican Town Caucus to be held on Tuesday, July 21. The Candidates’ Forum will be moderated by State Sen. Toni Boucher and will be broadcast by NCTV Channel 79 beginning at 7:30 pm. 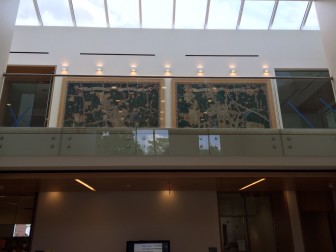 A pair of 78-by-115-inch WPA paintings by Walter Bradnee Kirby that imagined aerial views of New Canaan in 1834 and 1934, respectively, are being showcased under the skylight of the addition at Town Hall. Credit: Michael Dinan

As promised by First Selectman Rob Mallozzi, a pair of 78-by-115-inch WPA paintings by Walter Bradnee Kirby that imagined aerial views of New Canaan in 1834 and 1934, respectively, are being showcased under the skylight of the addition at Town Hall. The first selectman has called the WPA paintings, which long adorned the meeting room at Town Hall, among the “important artifacts for the town.”

Finally, congratulations to the New Canaan Boys 12U baseball team on winning a state championship in Cal Ripken Baseball: 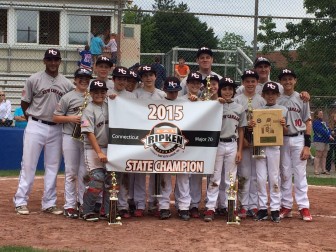 New Canaan’s 12U boys baseball team won the state championship in Cal Ripken Baseball this summer—congratulations to the players and coaches! Contributed