New Canaan Police this week promoted two sergeants and two officers, including some who recently had been honored by the department for outstanding performance of their job duties.

“We are proud of their accomplishments and excited to see them provide leadership to our officers as they serve our town so well,” Police Chief Leon Krolikowski said in a press release of Sgt. Carol Ogrinc and Sgt. Andrew Walsh, now lieutenants, and Officers Aaron LaTourette and Marc DeFelice, now sergeants.

In March, LaTourette received the first-ever Lt. Stephen W. Wood Memorial Officer of the Year Award and also was honored with a Unit Citation together with DeFelice and several other officers. Ogrinc received a Meritorious Police Duty Award.

“Our Department is fortunate to have these new supervisors whom will continue to help us drive our department forward,” Krolikowski said.

What follows is information on each promoted member of the New Canaan Police Department from the chief: 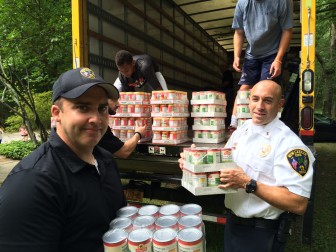 Sgt. Andrew Walsh (now a lieutenant) and Lt. Jason Ferraro of the New Canaan Police Department Special Response Team, making time to lend a hand at the Filling in the Blanks unloading in the summer of 2014. Credit: Michael Dinan

Lt. Walsh has served with the department for 15 years, filling many roles—patrol officer, dispatcher, patrol sergeant, DEA Task Force Agent, and is presently assigned to the Investigative Section. He is the Team Leader of the Department’s Special Response Team. During his career he has received many letters of appreciation and/or commendations for exceptional performance of his duties as well as three Meritorious Duty Awards. Lieutenant Walsh has a Bachelor’s Degree and Master’s Degree in Criminal Justice. 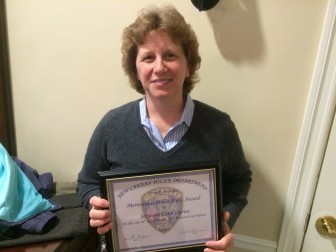 New Canaan Police Department Sgt. Carol Ogrinc on March 26, 2015 received a Meritorious Police Duty Award. DeMaio said she is “consistently delivering quality results, dedicated to her job and always giving whatever is necessary to get the job done and go the extra mile for our clients, the people she takes care in her normal course of business. She is our youth officer, our public information officer and our community relations officer. She wears a lot of hats and she does an outstanding job at each one of them.” Specifically, Ogrinc spearheaded and has been a steward of a critically important program that saw a prescription drugs drop box installed at police headquarters—among other uses, a way to rid medicine cabinets of drugs that often are a lure for criminals as well as a temptation and gateway for young people to opioid addiction. DeMaio said: “Sgt. Ogrinc was instrumental in getting the program off ground here in New Canaan, and she has really been instrumental in keeping it on track. You think about the things we need to do every day and it requires a lot of effort just to maintain the program and ensure that they stay vital and that is what Sgt. Ogrinc has done for us with this program here. Since its inception, we have taken over 1,270 pounds of prescription medications.” Credit: Michael Dinan

Lt. Ogrinc has served with the department for 27 years, acting in many roles – patrol officer, dispatcher, acting sergeant, and acting lieutenant.  She has been the department’s Youth Officer and Press Information Officer since 2006. She has served as the department’s Communications Training Officer and E911 Manager for 14 years. In 2012, she implemented the department’s Project Lifesaver Program. During her career she has received many letters of appreciation and/or commendations for exceptional performance of her duties as well as two Meritorious Duty Awards and a Unit Citation award. Lt. Ogrinc has a Bachelor’s Degree in Criminal Justice. Lieutenant Ogrinc and her husband John have two sons. 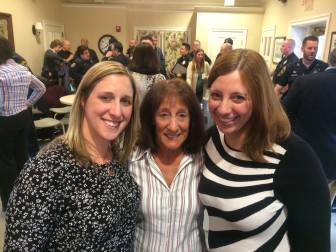 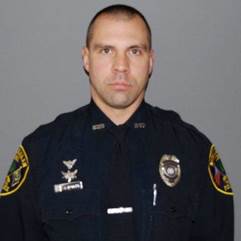 He has also earned Mothers Against Drunk Driving awards as well as commendations for exceptional performance of his duties. Sgt. LaTourette attended State University of New York-Courtland. He is an 18-year veteran of U.S. Marine Corps Reserve, where he holds the rank of Warrant Officer 2. During his Marine Corps service he was deployed to Iraq where he participated in Operation Enduring Freedom 2. He is married to his wife Kimberly and they have two children. 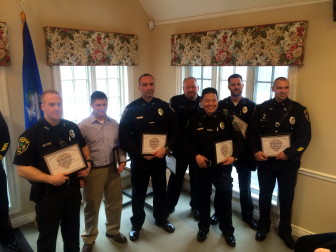 Pictured L-R, recipients of a Unit Citation on March 26, 2015, New Canaan Police Department Officers Thomas Callinan, Marc DeFelice, Brian Mitchell, Geoffrey Lambert, Jason Kim, Thomas Patton and Aaron LaTourette. Capt. Vincent DeMaio in recognizing the group said that after Patton went a step beyond what’s normally required to investigate a report of a suspicious package delivered in January to a Knapp Lane home, the other members of the day shift participated in important ways in driving an investigation that ended up identifying the nexus of a national criminal organization: “This was an organized criminal gang, located out of the Bronx. They would use stolen credit cards to purchase cellphones, they would always take the insurance on them, then get the cellphones and claim they had never received them because they were sent to fraudulent addresses. Then they would take the insurance and get another cellphone, so it was two-for-one. A stolen credit card buys you two phones instead of one. Through detailed investigation we were able to learn that this was pretty much a scheme that was occurring all the way up and down the East Coast.” Credit: Michael Dinan

Sgt. DeFelice has served the department for 12 years. He has filled the roles of dispatcher, acting sergeant and acting lieutenant, field training officer, business liaison officer and is a certified emergency medical technician.  Sergeant DeFelice is a member of the department’s Special Response Team and Honor Guard. Most recently, Sgt. DeFelice has been assigned to the Investigative Section.