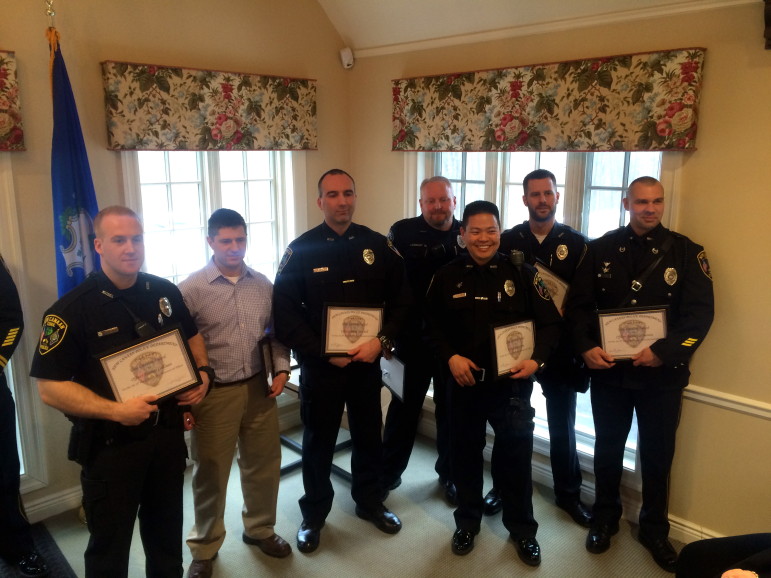 Pictured L-R, recipients of a Unit Citation on March 26, 2015, New Canaan Police Department Officers Thomas Callinan, Marc DeFelice, Brian Mitchell, Geoffrey Lambert, Jason Kim, Thomas Patton and Aaron LaTourette. Capt. Vincent DeMaio in recognizing the group said that after Patton went a step beyond what’s normally required to investigate a report of a suspicious package delivered in January to a Knapp Lane home, the other members of the day shift participated in important ways in driving an investigation that ended up identifying the nexus of a national criminal organization: “This was an organized criminal gang, located out of the Bronx. They would use stolen credit cards to purchase cellphones, they would always take the insurance on them, then get the cellphones and claim they had never received them because they were sent to fraudulent addresses. Then they would take the insurance and get another cellphone, so it was two-for-one. A stolen credit card buys you two phones instead of one. Through detailed investigation we were able to learn that this was pretty much a scheme that was occurring all the way up and down the East Coast.” Credit: Michael Dinan 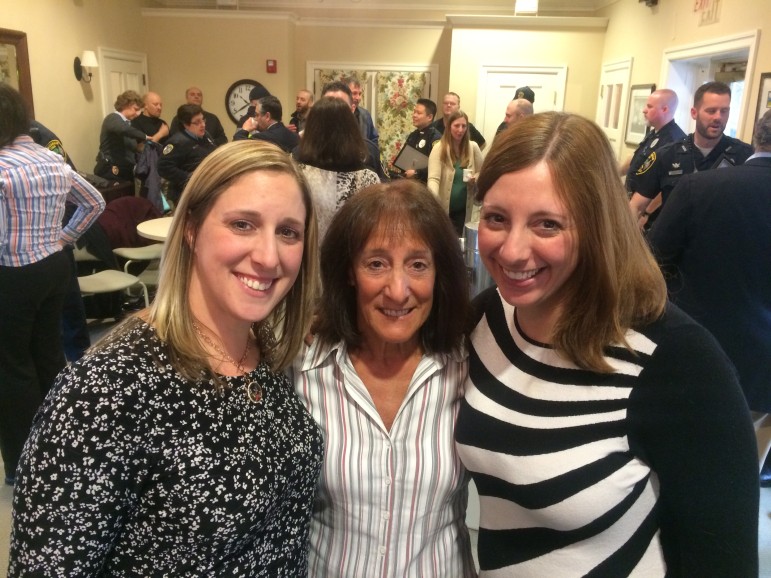 L-R: New Canaan Police Capt. Vincent DeMaio, Capt. John DiFederico, Pat Wood and Officer Aaron LaTourette at Lapham Community Center on March 26, 2015. LaTourette won the first-ever Lt. Stephen W. Wood Memorial Officer of the Year Award. He is the son-in-law of Pat Wood and the late Stephen Wood, in whose name the award has been established. Said DeMaio in presenting the award to LaTourette: “Aaron is truly the embodiment of the spirit of this award and of our department’s mission statement of serving the community with courage, integrity and professionalism.” He has been a police officer in New Canaan for 15 years, with one “break” from the job when he served with the U.S. Marine Corps in Iraq in 2004 during Operation Enduring Freedom, DeMaio said. “While occupying the patrol officer’s rank he is respected by his peers and supervisors alike. This is a man who always gives 100 percent, and is eager to get the job done. In addition to regular duties he holds the following duties, which took on of his own accord: acting sergeant, dispatcher, field training officer, special response team member, motorcycle enforcement officer and certified police instructor. It is ironic and altogether fitting that he receive this award first recipient of this award is that he is most deserving of it and he also happens to be Woody’s son-in-law. He stands as an example of what we expect of our officers in the New Canaan Police Department and what we want them all to be.”

Three of the New Canaan Police Department officers who received Meritorious Police Duty Awards at a March 26, 2015 ceremony at Lapham Community Center, L-R: Officers Thomas Callinan, Christopher Dewey and George Caponera. DeMaio said of this trio that their diligence, dedication and hustle in the often-overlooked area of traffic enforcement has helped deter crime and bring recognition to New Canaan as one of the state’s safest communities: “During the course of a shift, our officers have to be multi-taskers. There are any no calls they need to respond to, from medical emergencies to nuisance calls to dog complaints to domestic violence to fires. You combine that with all required paper work that goes with each and every incident now, which continually grows. It grows exponentially, every single year more and more so preparation of warrants, incident reports, mandatory state forms. An 8-hour shift really gets condensed, there is a lot for these guys to do over the course of eight hours. So for our officers to go out and do the vital function of traffic enforcement takes a lot of self-initiatives. That to us is a cornerstone of solid law enforcement. Self-initiated activity is not about writing tickets or meeting quotas—that has nothing to do with any of it. It is about making our streets safer, deterring criminal activity in our town, and having positive interactions with the citizens we encounter. Each one of these officers over the course of 2014 made excess of 500 self-initiated traffic stops. That is a phenomenal amount. They have gone over and above.” Credit: Michael Dinan

Matt Walsh (L) pictured with his family—Lorna, Tim and John—on being designated the first-ever honorary member of the New Canaan Police Department. Said Police Chief Leon Krolikowski at a March 26, 2015 ceremony: "Considering Matt’s affinity for our department and our officers, I am proud to make Matt an honorary member of the New Canaan Police Department … So, Matt, thanks for your support, your interest, your dedication to our officers. I am confident you will continue to be our advocate and our superfan … Best wishes with your studies, and you are part of our family now.” Credit: Michael Dinan 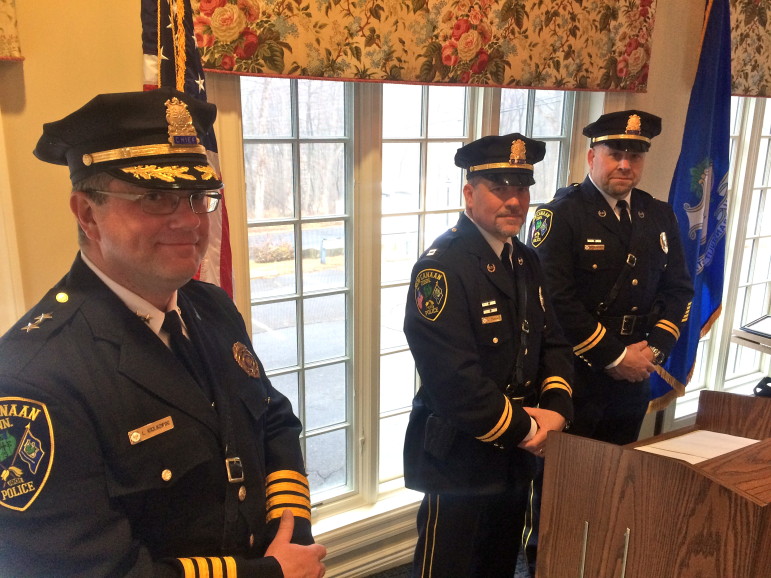 Though he passed away nearly four years ago, Lt. Stephen W. Wood, in ways that are profound to those who worked with him, has remained with the New Canaan Police Department.

Addressing a room full of New Canaan police, their families and town officials that gathered at Lapham Community Center on Thursday morning—including Pat Wood, widow of the 33-year NCPD veteran—Capt. Vincent DeMaio said “his presence is felt pretty much every day.”

“I think of him often, and I think his memory is firmly in place with every officer worked with him,” DeMaio said during a ceremony that saw 15 police officers receive awards—including a new, special award dedicated to Wood’s memory.

Asked at the event what she thought and felt about the award, Pat Wood said: “It’s an honor. He would be honored.”

His daughter Kim, who was on hand with her sister Kelly, as well, said: “He was a say-it-like-it-is, do-it-like-it-is kind of guy. He was one of those old-time guys that you don’t see a lot of any more.”

In describing for the crowd what the man known as ‘Woody’ meant to New Canaan’s finest and the wider community here in town, DeMaio said, “Woody exemplified all the things that I believe everyone wants a police officer to be: honest, with integrity, courage, command presence and a sense of fairness and justice. Woody was a straight shooter. You always knew where you stood. You always knew where he was coming from. He always told you exactly what he thought—he was honest to a fault, truly. He loved the New Canaan Police Department and he was deeply devoted to it. He brought his Marine Corps values of espirit de corps and semper fidelis and fostered atmosphere of fairness, loyalty and a team approach. Even though he’s been gone for three years, his presence still alive and well in our building at 174 South Avenue.”

In addition to the awards given to NCPD officers, the department for the first time recognized a civilian as an honorary member.

Matt Walsh is a 16-year-old Iona Prep student who has developed a singular and abiding respect and fondness for NCPD officers, the police chief said.

“These days we can use all the fans we can get. And Matt is definitely a super fan of our department, no question about that,” Krolikowski told the crowd.

“Considering matt’s affinity for our department and our officers, I am proud to make Matt an honorary member of the New Canaan Police Department … So, Matt, thanks for your support, your interest, your dedication to our officers. I am confident you will continue to be our advocate and our superfan … Best wishes with your studies, and you are part of our family now.”

Here’s some background, from DeMaio, on the three awards for police—see each photo above for more specifics on those honored: