We spotted this happily panting golden retriever at Irwin Park, and approached the pair at the other end of the leash for this installment of “New Canine-ites,” our profile series of New Canaan dogs. 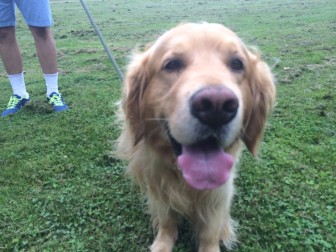 She just graduated from The Taft School and is headed to Middlebury in the fall—congratulations. 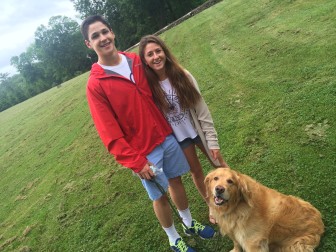 Asked what else he likes to do, Issy said: “We have a red 1969 Mercedes [convertible], and he loves riding around in that.”

Her friend Justin Lebec of Wilton (also a Taft student, a junior), added: “He’s very personable. He gets distracted a lot.”

Though he does frequent Spencer’s Run at Waveny, the family spends its summers on Martha’s Vineyard, so Bodhi has a second home there and loves swimming in the sea, Issy said.