Thomas Throop left New Canaan in 1982, heading off after high school to Connecticut College, where he earned an economics degree.

He would return 25 years later, a master furniture maker. 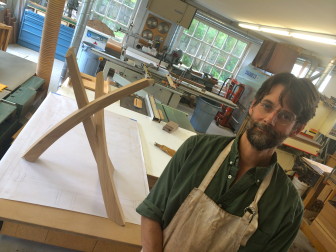 Thomas Throop, a furniture maker and designer who owns Black Creek Designs on Grove Street, here at his studio with a sculpture he’s been playing with. Credit: Michael Dinan

“It’s been a long and winding road,” Throop, 50, said on a recent morning, apron tied in back as he stood amid the sawdust here in his workspace at Black Creek Designs.

About 1,100 square feet on the ground floor of an inconspicuous building set back from Grove Street that includes an apartment above, this workshop is where Throop (pronounced ‘Troop’)—with a young, healthy, handsome Vizsla called ‘Primo’ by his side—spends about 10 hours per day, five or six days a week imagining, designing, shaping, testing, tweaking, building and ultimately producing about 15 to 20 pieces of furniture each year, for clients as far away as California and Arkansas. 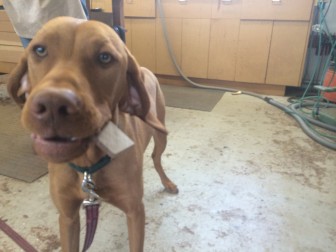 The nephew of a boat-builder with whom he spent summers in upstate New York while working his way through West School, Saxe Middle School and New Canaan High School (“[My uncle] gave me the sense of building things was an interesting thing to do”), Throop angled steadily toward his profession—which blessedly doubles as his intellectual interest, creative passion and vocation—first creating furniture while working in house restoration, then earning a place at a highly competitive two-year program in England, and finally settling back in the northeast (he lives in Rowayton with his wife, another New Canaanite, Kelley Franco, whom he’d met in Hartford).

For Throop, who minored in photography at Connecticut College, his main course of study—which focused on the application of math and statistics to economics—dovetails perfectly well with furniture making and design. 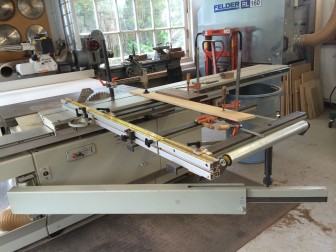 Some of the machinery and tools that furniture maker and designer Thomas Throop uses in his Grove Street workshop. Credit: Michael Dinan

“The reality is that the thought process and the problem-solving skills are exactly the same,” Throop said in a characteristically unhurried, sure manner of speech that speaks to his successful approach in the niche profession where he’s emerged as a widely known, original artist. “I take a lot of variables and I try to resolve them into an end result. It’s the same thing in econometrics, that was my focus. When I was in college, I focused on econometrics. It was very mathematical. Multi-variable problem solving. That’s exactly what making furniture is. It’s just one is with numbers and the other is with physical objects.”

Here’s a quick slideshow featuring some of Throop’s work, to pause on a slide and read the man’s comments on what he created, just move your mouse over it. The article continues below. 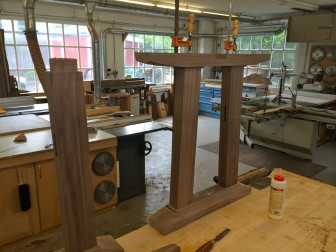 The shop’s walls are lined with hand tools, and there’s a bench where he gets much of the work done—the assembly and fitting of joints. The drawers of his workbench are filled with chisels, bits and other machinist tools. Large tools and machines are spaced apart in the well-lit workroom: wide belt sander, dust collection system, sliding table saw, drill presses, ripping saw, joiner, planer, band saw.

Inside the office is a photo of one of his uncle’s boats (it’s from the 1950’s, “Before my time,” Throop says), a painting that his grandmother did (his grandfather Charles E. Davis was a gifted painter, too, Throop said), and a bag of Zuke’s Mini Naturals Roasted Chicken Recipe Dog Treats. 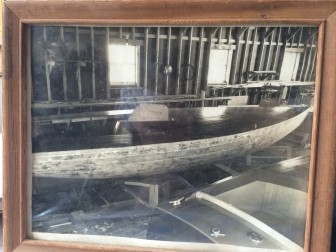 This photo of a boat being made by Thomas Throop’s uncle, probably some time in the 1950s, is framed and placed in the office at Black Creek Designs.

About 80 percent of Throop’s work is done on commission—a client may have an idea of something specific he or she wants done, or may commission a design from Throop, perhaps inspired by something in the furniture maker’s portfolio—and the other 20 percent is done on what he calls “speculation.”

“That tends to be ideas or forms that I am trying to work out,” Throop said. “Something that I think is an interesting piece that I’m exploring the material or shape. Letting something develop. That is what you have to do. It’s a process. Furniture making is a process. And you can’t bypass steps. You have to work through the process.”

An example sits right in the office itself. 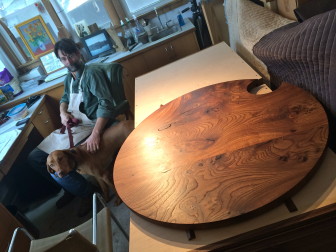 Thomas Throop of Black Creek Designs on Grove Street grappled for about 15 years with a big hunk of Elm he’d bought, and finally decided it wanted to be a tabletop, which he created. Credit: Michael Dinan

“I might have a piece of wood that I’ve had sitting around for 20 years or 10 years or whatever, and it’s something special and I have to finally come to terms with using and it then it forces me to design a form around that piece of wood. That happens quite often, is that the material can be almost—‘intimidating’ is not the right word—but it becomes imbued with some sort of symbolism. It’s very special. This tabletop right here. I just sort of grappled with this piece of elm that I had probably bought 15 years ago and it’s been sitting around and I probably moved it about 10 times and I finally thought, ‘Alright, what am I going to do with this thing?’ And so that sort of generates the, ‘OK, how can I best use the material, this piece of wood?’ And once I’ve decided on what that is—in this case, it’s a tabletop—now I have to think about what kind of base I’m going to put on that table. So when I’m creating a speculative form, it might be derived out of the material, maybe it’s a shape like that sculpture, maybe I’m working on trying to figure out what new form I want to create.” 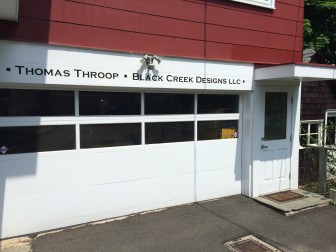 The longest Throop worked for someone else was 18 months at Martha’s Vineyard. That was in the late 1980s, after he’d taken his degree and he “bopped around” (his words) doing house restoration work in upstate New York, Cape Cod and New Hampshire. He was building a portfolio of furniture and designs on the side, and with those in hand—and an interview—he earned a spot in a coveted program at the John Makepeace School of Craftsmanship and Wood in Dorset, England.

“There were very few programs in the states that had a relationship to what I was interested in,” he said.

Asked why furniture specifically drew his interest—as opposed to another form of working with wood, for example—Throop said: “It’s something I’ve always appreciated. I think it was really furniture is just it’s of a human scale, and so it’s interesting to me. We interact with it. It has so many different levels of appreciation. There are pieces of furniture that sell for millions of dollars and yet we can also go to Ikea and buy a chair for 10 bucks. So there are all these different levels of how you approach the object.” 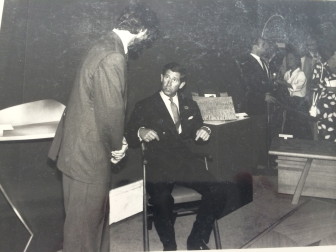 Here’s Thomas Throop of New Canaan in England, meeting Prince Charles as the royal Brit sits in a chair that Throop created. Throop says he cannot remember just what the Prince of Wales said, but that the royal was conveying how comfortable was the chair.

Though he lives near many of his clients, Throop works somewhat unnoticed and anonymously in New Canaan. A runner, hiker, kayaker and gardener, he belongs to no local organizations and his display window faces a remote corner of the lumberyard parking lot. Referrals are a major part of his business.

And the business often is meaningful, for Throop and his clients. For example, one piece of furniture, a campaign desk, was commissioned by a Canoe Hill Road man who had a walnut tree under which his own kids had played. 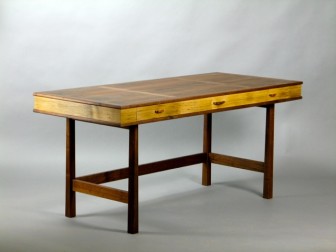 This campaign desk, a piece of commissioned work, is made from a walnut tree up on Canoe Hill Road. The tree itself had special meaning for the owner, since his kids had played under it. Throop had the tree milled and dried and created this piece of furniture. “You can’t get any more special than that,” he said.

“I had it milled for them and we let it dry for a year and a half, then I had it kiln-dried,” Throop recalled. “We let it dry for another—however many months that was—and then I designed the furniture for him that was to be made from that tree. You can’t get any more special than that.”

New Canaan has changed a great deal since Throop first left after graduating from NCHS in ’82. There were far fewer places to eat back then, or even moreso when he was a kid, he recalled, conjuring up names like Elmcrest, Brock’s and Pierre’s. 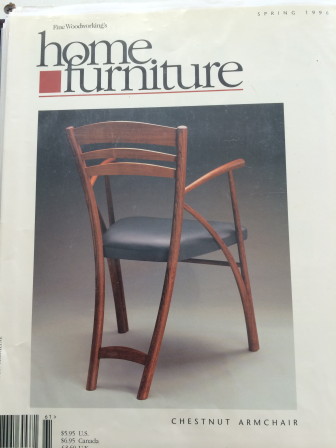 Here’s the armchair Thomas Throop (NCHS ’82) created that Prince Charles sat in, gracing the cover of a popular industry magazine.

The shop that Black Creek Designs now occupies had been a cabinet-making shop since the 1940s, Throop said, and he used to work as a kid across the street at TSAO, the lighting manufacturer.

Asked about returning home to New Canaan after his far-off travels, Throop said: “I would never have thought it was possible.”

One thing that’s made it possible is his success in the field. And one style that Throop is becoming known for is what he calls his “Laguna” series (see slideshow above).

Dynamic, fluid and full of movement, the sculptural form was born when a client approached Throop with a request for a dining table with a sculptural base and glass top.

“That’s a fairly broad request, and so part of the challenge for me is to take a broad request like that and distill it to what I need to work with, and actually that’s a vocabulary I’ve been doing for 20 years but always in a two-dimensional form,” he said. “So I actually took this two-dimensional idea that I had been exploring over the entire length of my career and I brought it to three dimensions, and I created this very sculptural three-dimensional form that also had a great structural integrity.”

The form was visualized and conceived by Throop out of a big block of wood.

“I just get a chunk of wood from the sawmill and I have to visualize where all the parts of any piece of furniture go,” he said.

Told that the Laguna style has the sinuous look of a deconstructed boat that’s been remade into far more something interesting, he said: “Well, certainly there is the notion that I do a lot of work with curves—and boats are all about curves, boats you know do not have a whole lot of right angles in them. I’ve gotten fairly comfortable working in that.”