Luciana Araujo had been working as a lawyer in her native Brazil when she arrived in Danbury with zero English and two young children in 2004. 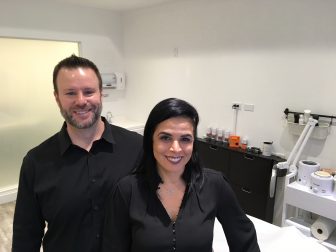 At 32, she’d followed her husband to the United States on the promise that after one year here on his own, he had secured a small apartment for the family.

Instead, Araujo learned, he wanted the family to move in with a cousin who had no room for all four of them. The cousin handed them the keys to a car and urged them to “go look for an apartment,” she recalled.

“We ended up sleeping for two days in the car in front of Target at Exit 8 in Danbury when I got here,” Araujo recalled on a recent afternoon. “Me, my kids and him. My kids still remember the situation. They never forget it.”

Araujo soon tapped into Danbury’s tight-knit Brazilian community, finding an apartment and church, acquiring clothes and furniture, eventually divorcing her husband and scraping together dollars by doing people’s nails and hair out of her home. 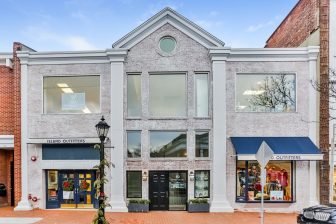 Five years later, in the midst of remarrying and divorcing again, the Brasilia native launched Braziliant Body Waxing, located at first in Danbury and then in Ridgefield. While supporting her children Marco and Katherina, now 21 and 19, respectively—both studying pre-med at the University of Connecticut—she and her companion, Mike Noonan, opened a second location on Main Street in New Canaan.

“What we’re hoping is that this is a business that people are willing to travel to,” Noonan said from the clean, well-lit space on the ground floor at 80 Main St., open since August and complete with a waiting area and four private rooms for clients. “People will travel up to an hour to come to our appointments and we hope that helps the other businesses in the community around us too.” 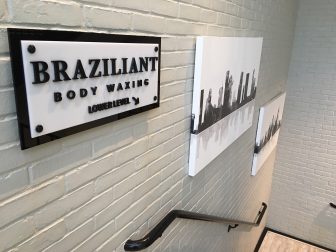 For Araujo, opening in New Canaan marks yet another milestone in an unlikely career that she said allows her to help people in a relaxing environment while supporting her family and offering social interaction.

“We started looking in Stamford and because of what we needed,” she said. “Every space we were being shown was just a wide open space so we were going to have to construct everything. Which would be huge costs.”

The New Canaan location used to be a speaker/home theater business, Noonan said.

In it, both men and women undergo body waxes that can range from 30 minutes to a few hours, and leave with “after wax” treatment products to ensure that they avoid bumps and ingrown hairs “and keep the skin looking nice,” Araujo said. 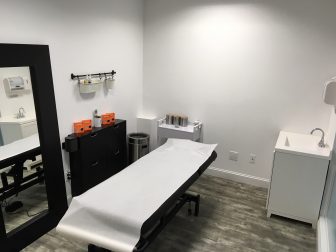 “Were very clean we never double dip into the wax,” she said. “My reviews say it all—people love the work I do.”

To achieve that, Araujo said, Braziliant and its three aestheticians use a “softer wax” than others that “takes a particular procedure to achieve.”

“It’s not as painful as you think,” she said. “The more you do it, the easier it gets and the pain goes down once you get used to it. The methods we use minimize pain and our technique is unique.”

She added: “I’ve been doing this for years and were the only salon in Connecticut that does anything wax-related, head to toe, for male customers.”

Araujo said Braziliant is eager to get involved in the local community and that she’s already joined the New Canaan Chamber of Commerce.

Laura Budd of the Chamber said the organization is “proud to welcome Luciana to New Canaan, as she reflects a growing trend of entrepreneurial women who follow their passion and create vibrant businesses.”

“We look forward to working with them to expand their awareness in New Canaan,” Budd said.

Araujo’s children help out at both locations when they are able, including her son, who is taking a year off now to join the National Guard.

Asked about the prospect of having two doctors in the family, Araujo said, “I keep my fingers crossed”

Asked about her long-term goals for Braziliant, Araujo said she would franchise the business eventually.

“And I want to do a very good franchise, I want everybody to be on the same page,” she said. “That is how I train the girls who work for me.”

The job involves far more than transferring melted wax from heaters with tongue depressors, Araujo said. In it, she has worked as a psychologist and found lasting friendships with colleagues and clients alike.

“This is not only a wax appointment,” she said.

Most of all, the remarkable success story of Braziliant is a testament to a mother’s desire to better her children’s life, though Araujo said she’s also highly conscious of not spoiling her kids.

“I want to make sure they work for it, so they appreciate it,” she said.

Asked to muse on the journey she made, from the time she arrived penniless in the United States just about 15 years ago with her kids 5 and 6 years old, Araujo said: “When you have the necessity in life and give your kids a better opportunity, you put everything behind and just go forward. You cannot be afraid. Sometimes I have my family say, ‘If you ever want to go back to Brazil, you can, Luciana.’ Because I still have my license, I still keep it up every five years. I can still go back to Brazil and practice there if I want to. But I have a passion for waxing, a passion for my job.”