Bruegger’s Bagels, a fixture of downtown New Canaan for some 20 years, will close this weekend, officials said. 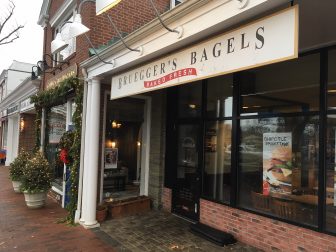 Bruegger’s Bagels, a fixture of downtown New Canaan at 11 South Ave., will close Sunday, according to workers. Credit: Michael Dinan

A worker at the South Avenue bagel and coffee shop confirmed with NewCanaanite.com that Bruegger’s doors will close for good at 12 p.m. Sunday.

Offering the widest range of bagels in New Canaan and popular with kids and sports teams, Bruegger’s garnered a loyal local customer base and sat on a busy commercial block, steps from Mackenzie’s and South Avenue Butcher. Established at 11 South Ave. following a company expansion in 1997, it sits in easy walking distance from the Morse Court parking lot.

Asked about the imminent closure, Einstein Noah Restaurant Group issued a statement saying that it recently announced the closure of 30 Bruegger’s Bagels bakeries, primarily in eastern markets including Washington D.C., Pennsylvania and Ohio.

“The decision to close the locations was based on financial performance and improved positioning for future growth,” the statement said

It continued: “Einstein Noah Restaurant Group values their employees and will be taking steps to help ease the impact of the changes by finding suitable opportunities for as many managers and team members as possible. This includes exploring opportunities at their sister brands: Einstein Bros., Caribou Coffee and Coffee & Bagels. The company will continue to operate 240-plus locations across the country and hope to serve our loyal guests at these locations.”

It isn’t clear whether there’s another tenant planned for the prominent New Canaan commercial space. The building is owned by a limited liability company whose principal is a Mamaroneck, N.Y. man, tax records show.

Bruegger’s is the second coffee shop in New Canaan to close this fall, after Kaahve at Main and East Avenue, which shuttered at the end of September (vegan and vegetarian food provider Organika Kitchen is moving in there).