The town last week issued a building permit for a 5,158-square-foot home on what appears to be a recently carved lot on Smith Ridge Road.

Here’s a rendering of the new home planned for 713R Smith Ridge Road, specs by Yates & Company LLC of Southbury.

According to a letter filed with the New Canaan Building Department along with site plans for 717 Smith Ridge Road, a question had been raised as to whether the lot formerly known as “713R Smith Ridge Road” is a valid building lot.

Attorney Peter V. Gelderman of Westport-based Berchem, Moses & Devlin said in a July 7 letter—send to Town Planner Steve Kleppin, P&Z Commission Chair Laszlo Papp and Secretary Jean Grzelecki and New Canaan-based attorney Ed Mellick and referencing a July 1 meeting—that a pair of recorded maps from 1948 each showed a portion of the parcel at 713 Smith Ridge Road, one of about five acres, the other about 6.7 acres. Both parcels, one tucked “behind” the other—that is, one according to those old maps, one had frontage along Smith Ridge Road, the other didn’t—have been owned by the same New Canaan residents since 1981.

“According to the zoning regulations that were in effect in 1948, the entire 11.698 parcel that was comprised of the parcels shown on [the 1948 maps] was entitled to a ‘free cut,’ and a map that showed the entire parcel with the new lot lines in exactly the same locations as shown on the two separate maps could have been legally recorded,” Gelderman said.

In 1948, rear lots were not required to have any frontage, provided there was a right of way to the road, which in this case it did, he said.

“So, the first issue that needs to be resolved is whether recording two separate maps, each showing a portion of a larger parcel, has the same effect as recording one map of the entire parcel showing the free cut and the two resulting lots. In my opinion, it is a distinction without a difference since it is clear that it was the intent of the property owner in 1948 to create two separate lots (there is no other apparent reason to file the two maps). Therefore, in 1948 the parcel existed as two legal building lots.” 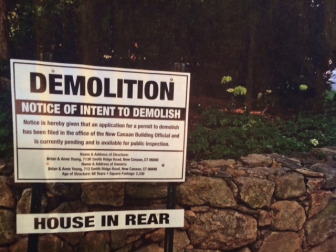 Here’s the demolition side that stood near 713 Smith Ridge Road, where a 1946 ranch-style house has come down to make way for new construction.

The entire property, totaling 11.7 acres, had been taxed as one lot until last fall, Gelderman said. The owner applied for and was granted last month a demolition permit for a 1946, 1,608-square-foot ranch-style house on the rear lot, according to tax records.

In Gelderman’s opinion, the lots should not be considered merged, either—notwithstanding that a 1985-built tennis court on the rear lot, in case of a merger, would no longer violate a setback restriction.

“In my view and primarily because of the existence of a second dwelling unit, the overall effect of merger would be to render the resulting lot more nonconforming than the two separate lots,” he said.

Meanwhile, the new home is to be built by Yates & Co. for $1.1 million and will include four bedrooms, three full bathrooms, two half-baths, two fireplaces, a finished basement and unfinished attic, open patio and covered patio. New Canaan issued the building permit Oct. 8.