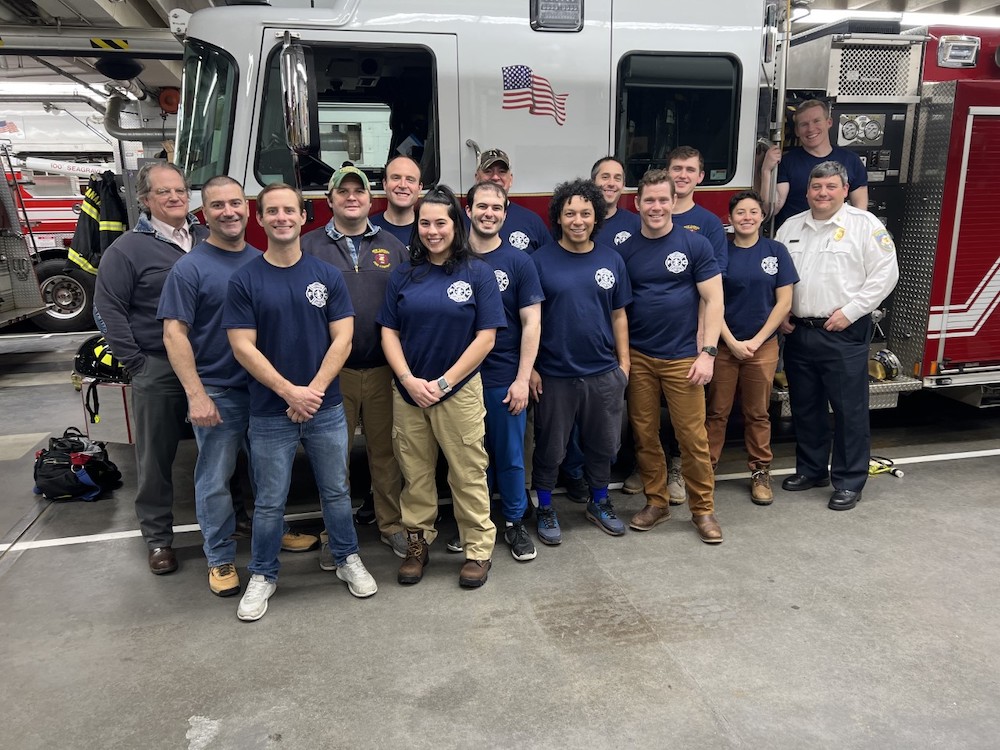 Town resident Lauren Freeland, a 2011 New Canaan High School graduate who works in commercial vehicle sales, had thought of becoming a firefighter in her hometown prior to joining the ranks last year, though she hadn’t been sure a good opportunity would materialize.

Freeland’s cousin is a firefighter in Bridgeport and at one point “it was brought up that I should try it,” she recalled Monday. “I had never really been in the right place and time in life yet.”

Last summer, Freeland spotted signs in town that New Canaan Fire Company No. 1 was recruiting, so she emailed the volunteer organization and quickly heard back “and that at that point I was like, ‘Crap, I have to go,’ ” she recalled with a laugh.

“I didn’t really know what to expect, and once I showed up it was great because everyone there was extremely nice,” Freeland told NewCanaanite.com. “I kind of went into it thinking I would be the only female there and I wasn’t, which was great, too, because it made me feel less nervous and the guys there were super nice. Actually, I never felt—even on the days when I’m the only girl there—never felt intimidated. They were open to showing me everything even without my asking them to. It’s a great team environment there, which for me is kind of what I enjoy being a part of. I do sales and you’re very alone, and then get to go there and be a part of the team, which is more fulfilling for me.”

A member of the Fire Company since June, Freeland is one of 11 new firefighters who joined the ranks in 2022—a class of volunteers that includes three women and ranges in age (early-20s to mid-50s) and professions (students, attorneys, automotive professionals, veterans, financial services professionals, medical professionals and sales).

They form the organization’s best recruiting year since 2016, and the Fire Company is eager to capitalize on that momentum in 2023, according to the Vice President Steve Kryger.

“Last year went great,” Kryger said. “One of the things I’m most proud of is that we got a group of new firefighters with a broad set of backgrounds and experiences. I think people have an image in their heads of what a firefighter is, but the reality is that you can have great firefighters who don’t fit that mold.”

And the Fire Company itself benefits from its members’ varied skills and life experiences, he said.

“You can think of the Fire Company as a small business—we have books to run, events to plan, training is scheduled and we have to contribute to the town’s capital expenditure budget, so when we get folks with related professional experience it’s hugely valued,” Kryger said. “We also benefit from people with experiences in the trades. We have folks who are builders and mechanics and electricians, and those skills can be directly handy in emergency responses.”

He added, “And a big part of our job is public outreach and connecting with the town. When we have a group of volunteer firefighters who resemble the town more, I think it helps with that mission.”

This year, the Fire Company can comfortably absorb the same number of new members that it found in 2022, Kryger said.

One of those new members, Steve Grosso, an engineer, said he joined the Fire Company last May in order to help the people of New Canaan, a town he’s called home for two-plus years. Many of the opportunities to do that have turned out to be small yet meaningful interactions with fellow residents, he said.

“The vast majority of stuff we do and that I have experienced as I have volunteered with the company are a lot of smaller things to do on a regular basis—checking a smoke or CO alarm,” Grosso said. “We had someone the other day changing a tire and the car slipped off the jack and we happened to be there for another call, so we brought the truck by to help out. That’s what really drew me to it, was helping people in the community and giving back.”

And the Fire Company also gives back to its volunteers, Grosso said, in education, connecting with other locals, staying fit and having fun.

“You really learn a lot of skills that can be helpful in situations, not just responding to a call,” he said. “We learn about hazmat, appliances, tying knots—you learn so many skills that really can help you in your personal life as well as understanding what to do in an emergency.

Part of enjoying the volunteer firefighter role “comes down to having fun,” Grosso added.

“I have fun at training 99% of the time,” he said. “It’s a lot of fun, good exercise, meeting new people and making friends with the volunteer and career staff.”

Asked about the 2023 recruiting goal, Kryger said it’s “probably finding 10 more great, motivated people and, again, trying to find people who come from all sorts of backgrounds but share a passion for helping out the community.”

“Also, I think one of the most important traits is curiosity and the type of person devoted to lifelong learning,” Kryger said. “As you can imagine, there is an enormous amount to learn. I’ve been doing it a little over two years, which in some sense is a long time bu I feel like I’ve personally only scratched the surface in terms of the different skills you need. There’s a wealth of experience in the Fire Department as a whole. The right type of person is hungry to keep learning more.”

Freeland said that the commitment required of a Fire Company volunteer involves training days in order to learn the necessary skills of the role, and then “you really go on your free time to try to catch a call.”

“I typically go after work when I can and I do live in New Canaan, so going to the station isn’t necessarily hard for me to do,” she said. “We do have guys who do live out of town, and then designate a day where if a call comes through, they do go to the station. I do that as well. I chose Thursdays, so any time Thursday evening to Friday morning I go to the station to be there for any assistance.”

New Canaan has a “combination department,” meaning it includes full-time paid firefighters in the Fire Department as well as volunteers from New Canaan Fire Company No. 1.

“They’re in town or close to town and they cover the town on a ‘24/7’ basis, versus the career staff where there are only six people on scene at a given time,” Bassett said. “The volunteers, being close to town, can assist with any incident that comes in. Obviously, if we did have an incident, especially a fire incident, it will supplement the initial six firefighters that are here in the station. They are going to be able to quickly supplement that while we’re bringing in other resources from off-duty or mutual aid.”

Asked what has surprised her most as a new member of the Fire Company, Freeland said it’s how firefighters check in from everyday professional lives.

“Everyone is really normal everyday people outside of the fire station,” she said. “It’s funny to think that when people leave, they go back to being a parent, or an engineer, or a nurse or working in sales. Everyone is a normal person and anyone can become a volunteer firefighter.”

Those interested in learning more about the volunteer fire service should email recruits@newcanaanfire.com.