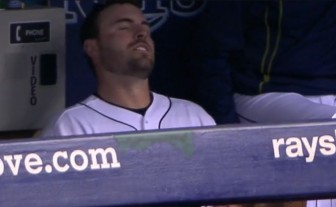 Rays catcher Curt Casali in visible pain in the Rays’ dugout after injuring his leg running out a home run on Tuesday, August 25, 2015. Photo: Contributed

Trailing Minnesota 10-6 in the fifth inning, Casali lined the first pitch of his third at bat over the left field fence off Twins pitcher Neal Cotts to pull the Rays to within three runs. Casali seemed to take an awkward stride near first base as he ran the home run ball out, and was in obvious discomfort as he rounded the bases. Replaced by backup Rene Rivera for the rest of the game, Casali was diagnosed with a strained left hamstring after an MRI on Wednesday and was placed on the 15-day disabled list.

The 2007 New Canaan High School grad is hitting .238 with 10 home runs and 18 RBI in 38 games this season, including nine round-trippers since the All Star Break. These stats project to an impressive 42 homers and 77 RBI over a full 162-game season. He made national headlines after hitting two homers in consecutive games earlier this season.