Closed for more than three months following an upper-story fire in the downtown New Canaan building that it occupies, Cava Wine Bar & Restaurant is on track for a spring 2017 reopening, officials said. 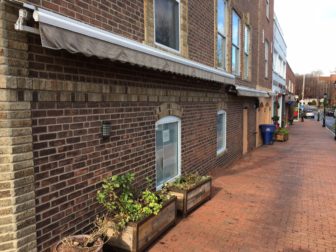 Cava Wine Bar & Restaurant on Forest Street has been closed since a Labor Day in the upper story of the building it occupies. It’s on track for a spring 2017 reopening. Credit: Michael Dinan

The popular Italian eatery, for 11 years an anchor of New Canaan’s “Restaurant Row” on Forest Street, is undergoing extensive interior demolition now as part of a comprehensive remodeling, according to Executive Chef/Owner Nube Siguenza.

She described the planned renovated space as “warm” and “cozy.”

“I want our customers to feel as though they’re coming into their own house,” Siguenza told NewCanaanite.com. “We are going to change the whole restaurant.”

It will continue to create its signature Italian dishes, though the menu also will see some updates, she said. Its brick oven will remain, she said.

Cava suffered water damage after an electrical short caused a third-story fire at 96 Main St. on Labor Day, setting off sprinklers. Five businesses in the building were forced to close on in the aftermath of the blaze.

One major feature of the re-launched Cava will be a dedicated dining room for private groups and functions, Siguenza said—a major need in downtown New Canaan.