An investigation into the cause of the third-story fire in a prominent downtown building at Main Street and East Avenue on Monday night is ongoing, though it does not appear to be suspicious, according to Fire Chief Jack Hennessey. 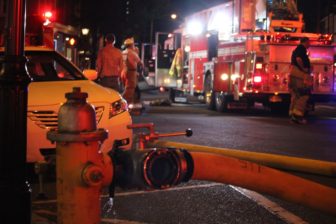 The five businesses that occupy 96 Main St. are not yet able to operate, as power had been disconnected to the building following the fire that started in the attic and the property management company first must get an electrician in for a survey, said Fire Marshal Fred Baker.

“Fortunately the fire damage was minimal and thank god the sprinkler system did its job,” Baker told NewCanaanite.com, echoing some of what Hennessey said from the scene on Monday.

“We don’t know what started it. Where it started we do know—in the attic, and had there not been sprinklers in there that would have been devastating.” 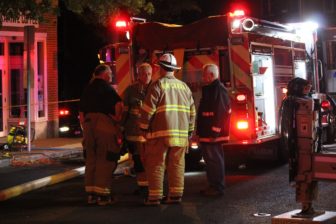 The building is occupied on its third floor by Wesley Stout Associates, a landscape architecture and planning firm, on the second floor by Harvey Kaufman Architect PC, on the first floor facing Main Street by Kaahve coffee shop and New Canaan Nails & Spa, and on the ground level facing Forest Street by Cava Wine Bar & Restaurant.

Patrice Cezzar of Kaahve said the shop did not suffer any damage from the fire or water, and that it will reopen as soon as power is restored, hopefully Thursday.

Cava also was closed Tuesday night. A representative reached by NewCanaanite.com said the restaurant had no immediate updates regarding its status.

One thought on “Investigation into Cause of Main Street Fire Underway; Five Businesses in Building Remain Without Power, Closed”