For the first time in recent memory, the New Canaan Rams will be heading into their season without a defined quarterback situation. It’s a scenario that may be amplified for the Rams—who will look to defend their three consecutive Class L State Championships—given the graduation of All-State signal caller Michael Collins, who has taken his considerable talents to the University of Pennsylvania this fall.

It’s not that New Canaan head coach Lou Marinelli lacks choices. In fact, as many as eight QB’s were in the running for the starting job through the summer—a talent pool that has been whittled down to five as New Canaan’s opening game against Trinity Catholic approaches this Saturday.

“We’ve started all over again,” Marinelli told NewCanaanite.com. “I would say we’re trying to figure it out. They each have stronger skill sets than others. If we put them all together, all five or six of them, we’d have one tremendous one.” 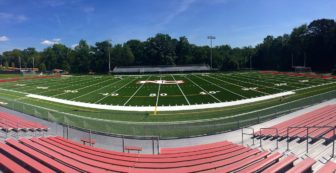 Senior James Crovatto appears to have the inside track early on. A 6’2”, 200-lb. mobile, running quarterback, Crovatto completed just one pass last season—which happened to go 80 yards for a touchdown.

“He has poise and is a good athlete,” Marinelli said. “He wants to do it and has leadership as a senior.”

Another senior—Spencer Williams—is also in the mix for playing time under center. Williams served as the main backup to Collins last season and played well, completing 12 of 26 passes for 77 yards and a touchdown.

Others competing for the role include junior Zach Fishman, sophomore Will Rechtermann and highly touted freshman Drew Pyne, who impressed in his most recent action this past weekend at the preseason jamboree.

Wide open is what Marinelli hopes to see from his receivers in 2016, despite the retirement of beloved receivers coach Daron Shepard, who stepped down after a decade with the Rams, replaced by former New Canaan standout Jason Cooper. Leading the way will be senior Jack Hoelzer (4-151, 2 TD receiving in 2015), who is recovering from an upper leg injury. Hoelzer will also serve as New Canaan’s kicker.

Also factoring in the Rams’ passing game—drawn up by offensive coordinator Dante Correnty—will be seniors Jackson Appelt, Austin Bell and Jack Rechtermann, who at 6’4”, 225 lbs. reminds many of graduated star receiver Kyle Smith. Juniors Justin Greco and Patrick Metzger also had impressive camps and will see time at wideout.

Given the uncertainty at quarterback, New Canaan will lean heavily on its running game this season—something Marinelli feels will be a strength due to a powerful offensive line and a multitude of athletes who can step into the feature back role. 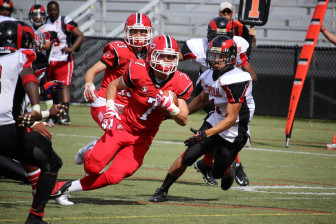 At the top of the depth chart in the backfield will be senior captain Ryan O’Connell. Perhaps the best athlete on the team, O’Connell continued New Canaan’s strong tradition of two-way players last year, starring on both sides of the ball. As a receiver, O’Connell pulled in 11 catches for 192 yards and three touchdowns. He also ran the ball 20 times for 109 yards and two touchdowns.

As a defensive back, O’Connell was third on the team with 66 total tackles and led the Rams with seven interceptions, including one pick-six and a sack. He also had a team-high with two fumble recoveries. O’Connell will continue to also see time at receiver and in the defensive secondary.

Although New Canaan’s offensive line will look to replace graduated All-State lineman Lucas Niang—now playing at TCU—the size, experience and strength of the Rams front five is as impressive as any group in the FCIAC. 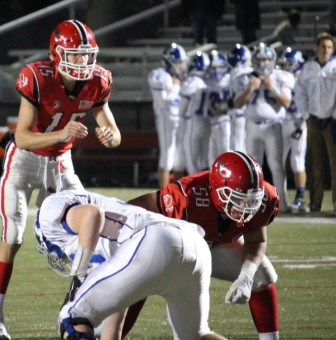 At this time last season, one of the biggest question marks for New Canaan was its defense, and the Rams responded immediately and consistently throughout the year as the starting defense shut out opponents in the first half of the Rams’ first six games of 2015. Marinelli feels the New Canaan defense—overseen by defensive coordinator Chris Silvestri—is in a better place heading into the 2016 campaign, which could mean bad news for the rest of the conference. 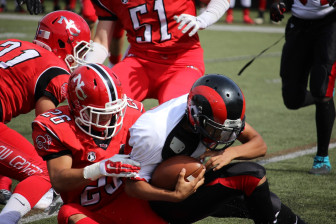 James Freyre returns to lead the Rams, as the senior captain was New Canaan’s top tackler in 2015 with 84 total stops from his linebacker position. Joining Freyre to form a solid battery of linebackers will be juniors Grant Morse, Charlie Hane, seniors Josh Vindas and Andrew Bauersfield. Graham Braden, Jack Rechtermann and junior Kyle Karr will also see time at LB for the Rams.

Co-Captain Tommy Root will headline the New Canaan secondary, as the senior cornerback made 47 tackles with three picks in 2015. Along with O’Connell, New Canaan boasts its best cornerback tandem since the heralded Alex LaPolice-Michael Kraus combo from the 2014 state championship squad.

Starting at safety for New Canaan will be Jackson Appelt and junior Sean Knight. Austin Bell will also be in the defensive backfield rotation along with juniors Jake Ciancio and Zach Miller and senior Ted Greenspon. Junior Griffin Arnone and seniors Charlie Wilson and Colin Daniels also impressed in camp. 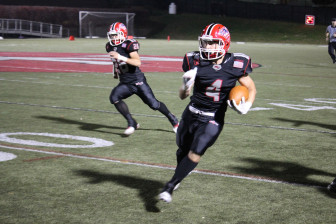 Junior Seamus O’Hora and seniors Dylan Miles and Jack Kircher give the Rams strength on the defensive line. Massive sophomore Jack Stewart (6’5”, 280 lbs.) was a revelation and will see a lot of playing time on both sides of the line, according to Marinelli who won his 300th game as head coach of the Rams in last season’s classic Class L title game over West Haven, 42-35. The Rams’ quest for a four-peat will be a challenge as New Canaan has a tough conference schedule this season, with improved Danbury, Ridgefield and Trumbull teams on the docket, along with perrenial rivals and FCIAC powerhouses Greenwich and Darien looming as well. Even so, Marinelli enters his 36th year at the helm of the Rams feeling the same sense of rebirth that he feels every fall.

“It doesn’t get any better than this,” Marinelli said. “Each year you say to the kids, ‘Now it’s time to write your legacy.’ And you say to yourself, ‘How can they ever re-do what’s been done before?’ And somehow the kids find a way.”