The Orlando Sentinel is reporting that there’s a 15-year-old football phenom in New Canaan who’s been offered a college football scholarship at Florida State University. Quarterback Drew Pyne is 15 years old and six-foot-one and 170 pounds, according to the Sentinel’s Chris Hays. He plans to start playing at New Canaan High School in Lou Marinelli’s program starting next year, Shays reported in a blog post. The teen (see video above) is from an established football family and his father, a prominent figure in the sports business world, confirmed the flattering offer from FSU in the article though he did not wish to speak on-record about it, according to Hays. 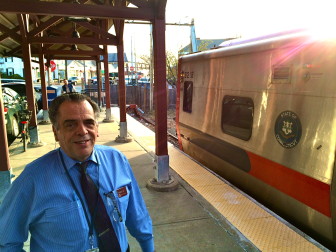 Frank Maltese on the platform at the New Canaan Train Station on March 24, 2016. He’s retiring as conductor at the end of May, after nearly 30 years with Metro-North Railroad, including 12 operating on the New Canaan branch line. Credit: Michael Dinan

Frank Maltese, popular conductor of the 7:56 a.m. “gentlemen’s train” out of New Canaan, had this to say following publication on NewCanaanite.com of an article about his retirement at the end of next month: “To the people that took an interest in me and who gave me the gratification of putting me into the New Canaanite paper, I would like to thank you.”

Police have been called twice in the pre-dawn hours during the past two weeks on reports of barking dogs on Bridle Path Lane, at 3:28 a.m. on March 27 and then 4:32 a.m. on March 30. No fines have been issued. 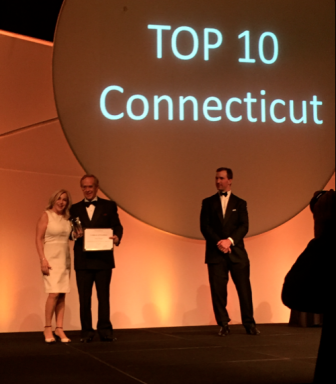 Congratulations to New Canaan’s Denise Gannalo, who received a “Top Producer Award” from Bill Raveis at the William Raveis Real Estate Annual Awards ceremony held at Mohegan Sun last Wednesday, March 30. She’s been a consistent winner of the award for more than 20 years, and this year ranked No. 8 in sales volume in Connecticut. That’s quite a distinction: William Raveis Real Estate has 3,500 sales agents in the state.

New Canaan’s “Clean Your Mile Campaign” is scheduled for the week of April 18 to 24, and officials are seeking volunteers to help organize the local effort—businesses, churches, nonprofit organizations, students, athletes, community service groups and individuals all can help make sure public spaces downtown, in parks, school grounds and residential neighborhoods are clean. Each group would only commit 1-2 hours, and garbage bags are made available at the Department of Public Works (first floor) and Inland Wetlands offices (lower level) at Town Hall. The committee that oversees Clean Your Mile is busy organizing area assignments now—those interested should email or call Lola Sweeney at lola.sweeney@newcanaanct.gov or 203-594-3089. 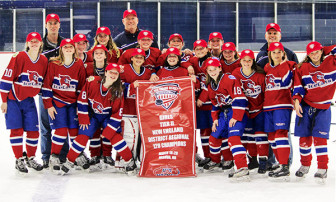 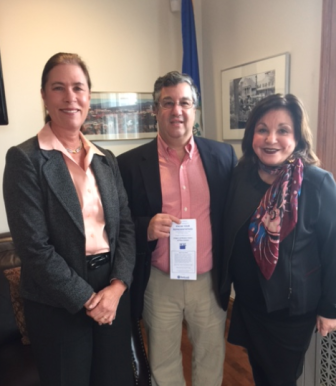 New Canaanites: Look out in your mailbox for the “Know Your Representatives” brochure from the League of Women Voters of New Canaan. Created thanks in part to Bankwell’s generosity, the handy brochure lists all representatives of New Canaan on the local, state, and national levels, and also includes local board and commission meeting times and office locations.

A mastiff—by mass, the world’s largest dog—broke through an invisible fence near the intersection of Valley and Colonial Roads last week, and chased a jogger. It happened at 1:18 p.m. on March 30. No one was injured. Animal Control Officer Allyson Halm said the matter has been addressed with the dog’s owner. 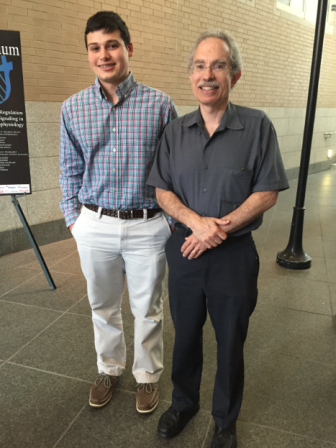 Congratulations to David Carratu, a senior at New Canaan High School who recently won the Acorda Scientific Excellence Award. He’s the first NCHS student to win the award, which was created by Acorda Therapeutics, a biotechnology company located in Ardsley, N.Y., and WGCH-AM Radio and honors Westchester, Putnam, and Fairfield County high school students. Over the summer, David conducted his own research project under the mentoring of Seth Guller, PhD, director and senior research scientist at Yale. Dr. Guller had studied the effect of many diseases such as pre-eclampsia on the development of the placenta. His main research area is identifying potential causes of adverse pregnancy outcomes. David’s project focused on how herpes virus infection of placental macrophages affects protein expression and the initiation of the inflammatory response in the placenta.

An Oenoke Ridge Road resident racked up $259 in fines from police after two dogs—a mountain dog and Labrador retriever—were found roaming off-property. A past offender, the dog’s owner was fined $92 each for allowing a dog to roam, and additional $75 for failure to license one of them. 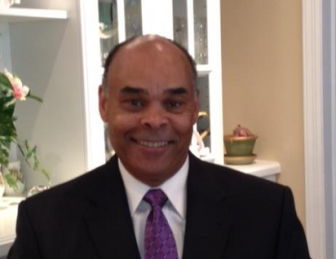 Congratulations to New Canaan Youth Sports Committee member Garland Allen on receiving the Coach’s Lifetime Achievement Award from the Greenwich Old Timers Association. As reported on our sister site Greenwich Free Press, Allen “served the Greenwich Public Schools with distinction for many years as a teacher of Health and Physical Education.”

“Garland was also the Director of Athletics for eighteen years and coached football, basketball and track at Greenwich High School. Three of his former team captains (Taylor Baldwin, Steve Young & Ceci Hopp) were some of the most accomplished athletes in the history of Greenwich High School sports,” the citation said. 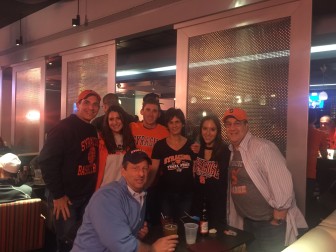 Kit and Rob Mallozzi (far right) with New Canaan Fire Commissioner Al duPont and the Lord family, all up at Syracuse (where Kit Mallozzi and Emma Lord are students) for the NCAA men’s basketball Final Four. Contributed

First Selectman Rob Mallozzi ran into a few locals while visiting his daughter, Kit, up at Syracuse University this past weekend during the NCAA Men’s Basketball Tournament Final Four (the Orange would lose to heavy favorite UNC). Up there with him were New Canaan Fire Commissioner Al DuPont and the Lord family, including Emma (a ‘Cuse junior) and Drew (a student at Cornell). 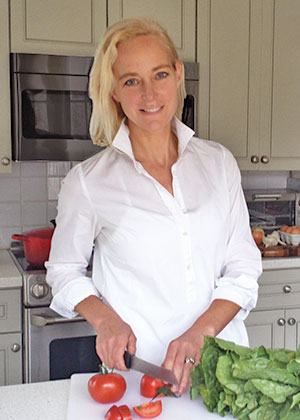 Finally, congratulations to town resident Angela Colabella and her company, New Canaan-based Little’s Cuisine, for its awards at the recent CT Specialty Food Association’s 14th Product Awards Competition in Plantsville. One hundred sixty-eight wines and specialty food items from Connecticut-based manufacturers were entered into 39 categories, and Little’s Specialty Foods Inc. was listed as first-place winner in the Gluten-Free category for its Taco Seasoning Mix, and second place in the Packaging category for its Bloody Mary Seasoning Mix.