New Canaan’s Chris Kilbane had been working in New York City for about 12 years, creating pharmaceutical products, when he spoke one afternoon to the owner of New Canaan Toy Store while shopping there with his son Ryan, about five years old at the time. 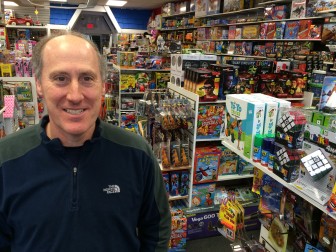 Innocently, Kilbane asked the owner if she’d ever consider selling the place. She responded that in fact she had, that Kilbane seemed like a nice guy and they should talk.

A week later, he owned the place.

In the decades since, Ryan and his little brother Connor went through South School, Saxe Middle School and New Canaan High School (they’re 27 and 24 now), and a whole generation of local kids have grown up with toys from the iconic Park Street shop, widely identified as the oldest continually operating toy store in New England. 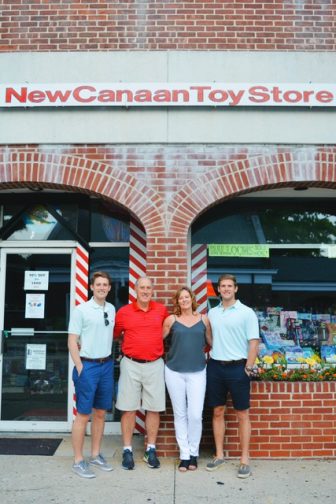 On Friday, Kilbane sold the business to an area couple and longtime friends that have vowed to keep it going—a measure of comfort in what he described as a “bittersweet” moment.

“From a personal standpoint, this is a great job,” Kilbane said Tuesday during his final shift at New Canaan Toy Store. “It’s a lot of fun. You laugh. If you can laugh hard every day at some point during your day when you are working, I would say it’s a good day. And every day here, I’ve had laughter pretty much throughout the day, whether that’s employees or customers or kids. It’s a really special place and in that regard. It’s kind of difficult to leave that behind, because I don’t think you can replicate that in any other kind of business.”

Kilbane and his wife, Janet, are moving to Charlotte, N.C. where her company, Covia, has relocated her following a recent acquisition and IPO, he said.

For Kilbane and the wider community, his departure bookends a mini-era within the successful longer run of the New Canaan Toy Store, which the family has traced to 1928 as part of a general store, emerging as a standalone shop around the late-1940s and living much of its life as ‘Hobbyland.’

“The customers here in New Canaan are great,” Kilbane said. “They have always supported this toy store and I hope they will continue to do so because it is such a historical piece of the community fabric, and one of the longest-running businesses in New Canaan. So I hope they keep supporting it. The new family is wonderful and they will put their energy and enthusiasm into it and I think it’s going to be great. … It has been an incredible incredible run for 22 years. Doing this it has been probably the funnest experience in my life. To see kids grow up, come back married with kids and shopping in the same toy store—it is something that is really indescribable.”

The new owners are Nathan Shapiro and his parents, Ilene Traiger and then Joe Shapiro, all of Ridgefield, Kilbane said.

Kilbane called moving to Charlotte “another new adventure” and said he and Janet have been thinking of moving down south anyway, “and now that decision is made for us.”

“It’s really exciting, but New Canaan is an absolutely wonderful town, with great friends and family nearby, so that is challenging,” he said.

Asked about his own plans for Charlotte, Kilbane said, “I’m too young to retire. I am going to chase down a few more dreams, see what they got down there.”