After saying initially that they’d made an honest mistake in demolishing part of their pre-American Revolutionary War era home on White Oak Shade Road without a permit, its owners now have put in for a permit to raze the entire structure. 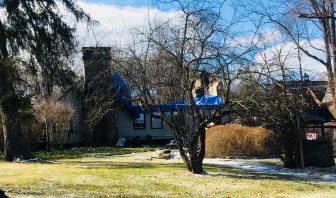 Elena and Dmitiry Kochin purchased the Cape-style home on 1.54 acres in December for $840,000, tax records show.

In February, the town issued a cease-and-desist after the roof and second floor of the home underwent an non-permitted demolition. When the Kochins put in for an after-the-fact permit, town officials decided to forgo imposing a 90-day delay on it because doing so would only leave the home open to the elements for longer.

Members of the Historical Review Committee said at the time that during a walkthrough of the property with the owner, architect and contractor, everyone expressed that what remained of the home needed to be protected. Dmitiry Kochin told the committee that his contractor read the town’s building permit application wrong, though the only permit granted to the homeowner at that time was for “interior alterations only” in the applicant’s own words.

The after-the-fact permit was granted April 3.

It isn’t clear why the Kochins now are pursuing a full demolition or what their plans are for the property. No further building permit applications have been filed with the town and the Kochins could not be reached for comment.

Preservationists have said the White Oak Shade home appears to be one of 27 to 29 pre-Revolution buildings that still stands in New Canaan. Under the Town Code, anyone who opposes a planned demolition has 15 days following notice in a newspaper to file a formal written objection with New Canaan’s chief building official.