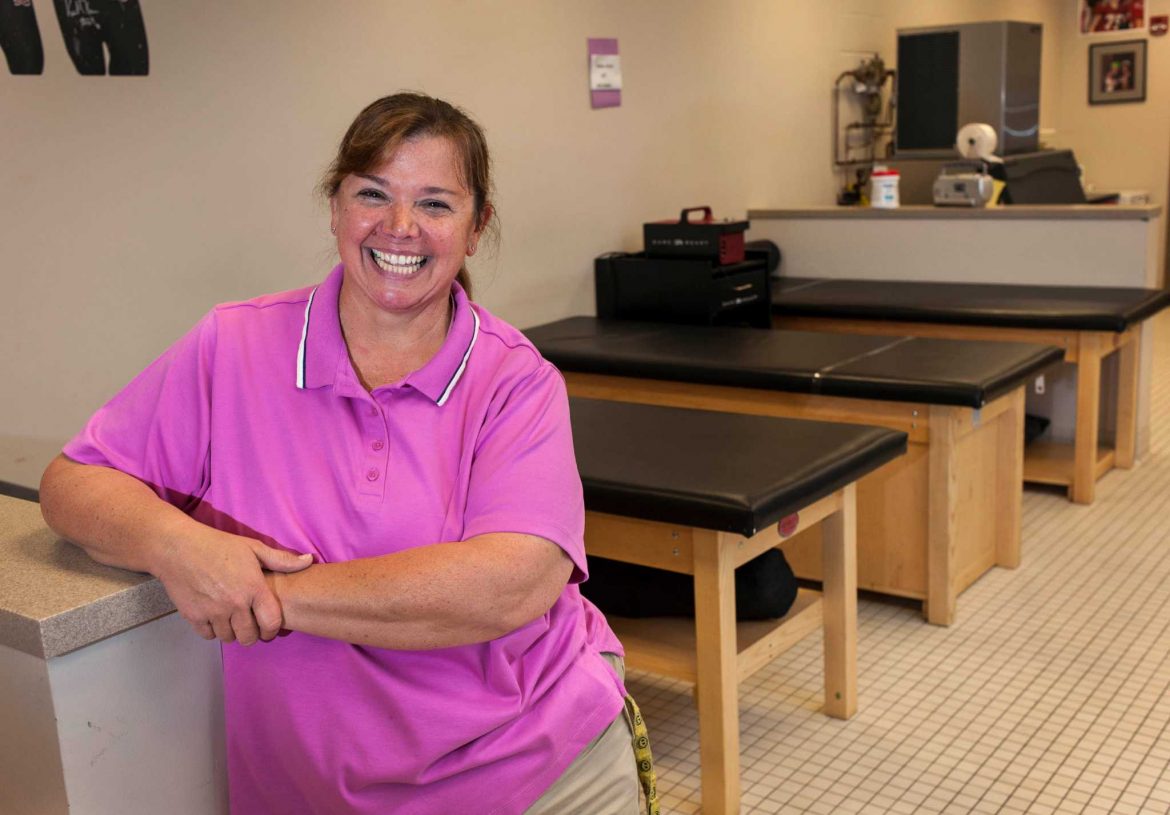 New Canaan High School senior Callum Wood, co-captain of the varsity boys’ lacrosse team, had already dislocated his knee once when the injury re-occurred the day before a game versus St. Joe’s during his sophomore year, in 2019.

After Wood popped the knee back into place, NCHS Athletic Trainer Diane Murphy-Kivell helped him ice it and “deal with everything, gave me pointers on what to do and where to go for physical therapy,” he recalled.

“Every single day she would let me go in, even though she technically didn’t have to help me,” Wood told NewCanaanite.com. “There are a lot of other kids with other injuries that would be playing, so she kind of has to take care of them, too.”

Wood is one of thousands of NCHS athletes that Murphy-Kivell has helped through nearly four decades of service in a job that demands skill, care, commitment and passion. She’s retiring next month after 39 years in the position.

“Something about Diane that I have always found to be really special is that she has a conviction for doing what’s best for the long-term health and safety of the athletes,” Athletic Director Jay Egan said.

She’s being honored next month. At 5 p.m. on Friday, June 11, the high school is hosting a retirement celebration at Dunning Stadium to acknowledge Murphy-Kivell’s commitment to and indelible mark on the community. The meet-and-greet and presentation are open to the public.

In 2015, she was named the “Secondary Athletic Trainer of the Year Award” from the state association for athletic trainers in recognition of her work. Under Murphy-Kivell’s leadership, NCHS has been consistently recognized with the Safe School Award from the National Athletic Trainers Association.

According to Wood, a Tufts University commit, Murphy-Kivell helped him in icing and compression, stretching, strengthening and doing stimulation in recovery from ligament reconstruction surgery.

Asked about Murphy-Kivell’s popular office, Wood said that “she’s welcoming to everyone coming in.”

Wood added, “There’s some kids where they’ll have like one little injury at the beginning of the year and they make sure it never happens again” and “they go in every single day” to see Murphy-Kivell.

5 thoughts on “‘Committed and Compassionate’: Diane Murphy-Kivell To Retire After 39 Years as NCHS Athletic Trainer”