A prominent state organization has honored two New Canaan women for their decades-long and far-reaching work in historic preservation. 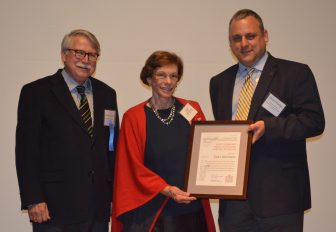 The ‘Mimi Findlay Award for Young Preservationists’ will recognize individuals or groups of people 35-and-younger involved in preservation of historic buildings, districts, landscapes or sites in Connecticut.

Asked how she feels about the honor, Findlay told NewCanaanite.com that she’s “thankful.” 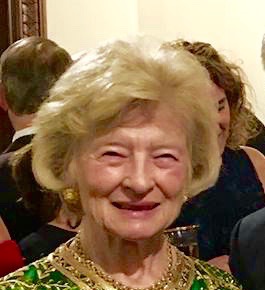 “I hope it may inspire other young people to take up the challenge and spread the word—old houses, old buildings, old furnishings have many new uses and should be recycled,” she said. “Digging up the artifacts buried in a trash pit is all part of discovering the way people lived in the past and part of the big cultural picture.”

She added: “This award makes me very happy and proud of my life’s accomplishments, and pleased that they are recognized.”

Lindstrom was not immediately available for comment. In a press release from the state agency, she described historic preservation as integral to the Historical Society’s mission.

“It’s how we serve the community,” she said in the release. “We use what we have to help make sure each place keeps its own history.”

The award that Lindstrom won is named for Janet G. Jainschigg, a founder and benefactor of the Connecticut Trust.

A former Historical Society board president who was hired as director in 1985, Lindstrom was honored for her stewardship of the organization’s several historic properties, including the acquisition of the 1868-built Little Red Schoolhouse, restoration of the Gores Pavilion in what New Canaanites know today as Irwin Park, and perhaps most importantly her activism as regards the town’s zoning regulations. She led the Historical Society in working with the town to adopt preservation measures including a delay of demolition ordinance, to allow time to explore alternatives to demolishing historic buildings, and zoning incentives to encourage the reuse of historic barns and houses.

“The Society’s most notable preservation activity under Janet’s leadership has been associated with New Canaan’s Modernist architecture,” according to an award citation. “She herself has said, ‘Probably the most important historic thing in New Canaan, other than the fact that we were a shoe manufacturing community early on, is the fact that we had a Modern movement.’ Beginning with the five Harvard-trained architects (plus one Yale graduate) who landed in the town after World War II, New Canaan quickly became an influential hotbed of Modernism. The Society recognized the significance of this early on — the annual published its first article on the town’s modern movement in 1967, and Philip Johnson served as a governor of the Society at about the same time.” 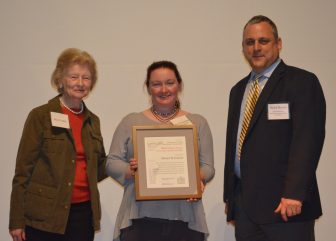 The winner of the inaugural Mimi Findlay Award is archeologist Mandy Ranslow of Windsor Locks, who works as transportation planner in the Office of Environmental Review of the state Department of Transportation.

In the position, she is responsible for reviewing transportation projects for their potential effects on historic cultural resources, particularly archaeological sites. Since high school, she has been a member of the Friends of the Office of the State Archaeologist, and as its current president she led the organization in nominating five Archaeological Preserves, launched a social media presence and organized an annual Archeology Fair.

Findlay first became involved in preservation at the Wilton Historical Society where, helping to catalogue its furniture and map collections as a young volunteer.

She would go on to the Lockwood-Mathews Mansion as a member of the Junior League, and wrote the first history of the mansion for distribution at the Charter Membership Ball in 1966.

Her citation continued: “Encouraged by her late husband, Peter Adams, she attended a two-week program hosted by the National Trust for Historic Preservation in Washington, where she was introduced to all the recently created Federal funding and protection programs for historic preservation. With that information she was able to secure major grants for the Mansion and start the process for its becoming a National Historic Landmark. In 1970 she began her studies at Columbia University’s School of Architecture and Historic Preservation. Simultaneously employed as Director of the Wilton Historical Society, she raised funds to move the historic “Bachelor House” out of the way of road improvements at the intersection of Routes 7 and 33, where the cottage stands today.

“In 1974 she began her ten-year employment by the State of CT as a member of the State Historic Preservation Board, contributing to state preservation policy and reviewing nominations to the National Register of Historic Preservation. Over the next ten years she also served on numerous local, state and national preservation boards, including the Victorian Society in America, the Wesleyan Landmarks Advisory Board, founded the Smith Alumnae Committee to Save Alumnae Gym, Preservation Action in Washington, the CT Architecture Foundation, Governor’s Heritage Task Force, among others, and served on the New Canaan Planning and Zoning Commission 1979-88.