The New Canaan Historical Society announced Tuesday that Executive Director Janet Lindstrom will retire after 34 years with the nonprofit organization. 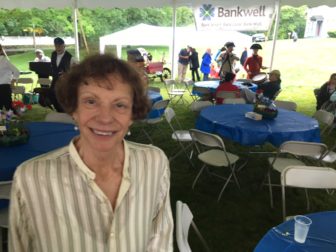 The longtime town resident began her career at the Historical Society as a volunteer and joined its Board of Governors in 1981, according to a press release.

“Telling the story of our town has been a great honor,” Lindstrom said in the press release. “I’ve played a special part of the society’s 127-year continuum, preserving the history of this exceptional place and helping generations of people to explore what makes our community so special.”

Mark Markiewicz, board president, confirmed with NewCanaanite.com that Lindstrom will remain in her role until a successor starts.

Founded in 1889, the Historical Society keeps an active research library on the town, runs exhibitions out of The Town House at 13 Oenoke Ridge Road, where a meeting room is named after Lindstrom, publishes historical newsletters and pamphlets, holds educational tours and exhibitions and owns a handful of historic buildings in town. The organization last year launched a digital New Canaan Street Name Database in partnership with NewCanaanite.com—a searchable database that lists the history of local street names, drawn from a 1960 annual of the Historical Society.

Lindstrom’s opinion regularly is sought by New Canaan property owners making land use applications when an expert’s view on the historical significance of various structures or proposed projects comes before the town. She often walks through older residences or other structures when a demolition permit is sought, to determine whether they have cultural, architectural or historical value, and for many years has served as interim chairman of the Historic District Commission.

According to a press release, Lindstrom served as board president in 1983 and was named executive director in 1985. During her tenure, the biennial Modern House Day tour was revived and Ice Cream Social established. The latter is held each year on the great lawn of the Historical Society, at the top of God’s Acre. On Lindstrom’s watch, the Historical Society helped protect and preserve The Little Red School House on Carter Street as well as the Gores Pavilion in Irwin Park, the press release said.

A Penn State graduate with a master’s degree from Columbia, Lindstrom taught at several New Canaan schools—she was a Center School parent—and was named ‘Woman of the Year’ by the New Canaan branch of the American Association of University Women in 2004. (Lindstrom, in fact, is one of the five women who founded the local AAUW chapter in New Canaan, in 1974.)

Markiewicz said in the press release: “Janet has been a superb director. Her dedication and a highly disciplined approach to a very complex organization is truly inspiring. The exhibits, programs, lectures and events developed under her leadership have provided each one of us with an especial appreciation of New Canaan.”

A search committee has been formed and a new executive director is expected to be named in the coming months, the press release said.

“Lindstrom has agreed to stay on with the Historical Society as Executive Director Emeritus through 2018 to ensure a smooth transition for her successor,” it said.

An open house to honor Lindstrom’s service will be held in early 2017 at the New Canaan Historical Society, located at 13 Oenoke Ridge Road. For details visit www.nchistory.org or call 203-966-1776.