Saying major projects are needed to update its facilities and meet the needs of its members, one of New Canaan’s oldest organizations is applying to rebuild and reconfigure various structures at its 153-acre property. 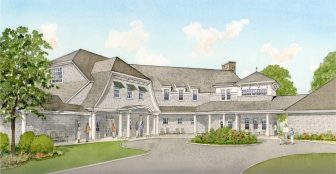 The Country Club of New Canaan last week applied to the Planning & Zoning Commission to relocate its pool and rebuild a pool house as well as to reconfigure and expand its heavily used main clubhouse.

CCNC’s membership will not increase as part of the project, which is designed to “retain the feel of a residential estate in the 4-acre zone,” according to the application, filed on behalf of the club by attorney Steve Finn of Stamford-based Wofsey, Rosen, Kweskin & Kuriansky. 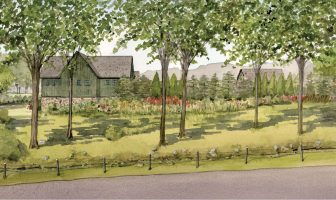 “The Club recognizes its civic responsibility to provide an appropriate architectural presence for the area,” according to the application. “The plans are consistent with the original mission: a ‘club in the country.’ The submitted design recalls many of the architectural aspects of the original clubhouse of the late 19th and early 20th centuries and is representative of southern New England architecture at the time.”

The project’s overall purpose is “to reconfigure the club facilities to better serve the membership,” according to a statement that accompanies the club’s Special Permit application, and “the functioning of many aspects of the club will be upgraded and enhanced, and circulation by members to the various facilities will be improved.” 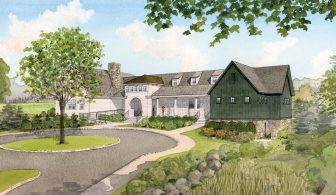 “One of the major features of the proposed project is the relocation of the pool to the east, closer to Smith Ridge Road. In addition to allowing for the much needed reconfiguration and expansion of the Clubhouse, this will allow the Clubhouse to have a panoramic view of the property to the north and west.”

The statement continued: “The proposed project includes several other significant improvements to better serve the existing membership and increase the appeal for potential members. Importantly, the number of members at the Country Club is not increasing. The enhanced interior spaces will finally allow the Club to host large member events in a banquet room. Currently, events such as the Mother’s Day and Easter lunches are only possible if tables are spread throughout the Club, spilling into the lobby and hallway spaces. In addition, by improving the quality of the event spaces, both indoor and outdoor, the Club would hope to capture membership banquet revenue it currently loses to other venues.” 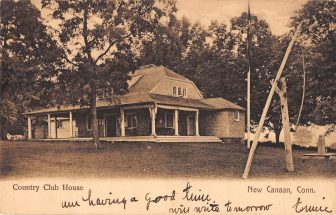 The project also will see “significant upgrades to the kitchen, renovating administrative space, and creating and improving employee space, all of which are currently inadequate.”

“There is an increase in square footage in member dining areas so that more members can dine together in the Clubroom without having to spread into the banquet area or other areas. Shared dining in the Clubroom has always been at the heart of the member experience at Country Club of New Canaan, but is now very compromised due to inadequate space.”

The single highest taxpayer entity in the town, the 1893-establisehd Country Club makes its application about three years after the nearby Field Club earned approval from P&Z to expand its pool pavilion.

The club is seeking approval from P&Z for its site plan—it’s located in the four-acre residential zone, and approval is required under the New Canaan Zoning Regulations “for any construction, development, expansion or major alteration” of a non-residential use there (see page 164 here)—as well as approval for a special permit. That appears to be tied to the amount of soil that must be moved in order to carry out the project, and an attendant application already has been filed with the Inland Wetlands Commission. The full application—available here in all its parts (select 95 Country Club Road in the dropdown)—also includes a comprehensive landscaping plan.

The Country Club’s banquet facilities play host to numerous large community events and special occasions, including the annual Gridiron Club show and awards ceremonies for organizations such as the New Canaan Preservation Alliance.

The clubhouse itself is expected to close Jan. 1, 2019 for approximately one year during its renovation, according to Country Club President Bill Pratt.

“The club will have temporary facilities during much of the closing, but we do not anticipate having a temporary banquet facility,” he told NewCanaanite.com in an email in response to a question about the availability of the facilities.

“When we re-open we will have a much-improved and better proportioned banquet room with perfect sight lines for all event attendees and a vaulted ceiling with plenty of natural light. We hope the organizations that have held special events at the club in the past will return in 2020 to our beautiful renovated clubhouse.”

Founded in 1893 on Oenoke Ridge Road roughly opposite the Roger Sherman Inn, the Country Club of New Canaan has been in its current location since 1895, according to the application.

“The original Clubhouse, a part of which still remains, was the main structure at St. John’s Farm, which was located on the property at the time it was purchased by the Club,” the application said. “The farmhouse was situated on a hill where the current Clubhouse is located and overlooked the property with a beautiful view of the pond and Oenoke Ridge to the west.”

It continued: “As the Country Club grew and developed over time, amenities were added to the original structure or in the immediate surrounding area, resulting in the Clubhouse evolving in somewhat of a hodgepodge fashion. Tennis courts were added in the early 1900’s, just west of the Clubhouse in the same location they are now. In 1928 a swimming pool was added just north of the Clubhouse. The existing pool, which was built in 1964, has not been significantly renovated or undergone any significant improvements since that time. At present, it is in need of significant additional repairs. Although the Clubhouse has undergone renovations and expansions over the ensuing years, it has been in a piecemeal fashion and has not utilized the attributes of the property. As a result, the pool, tennis courts and clubhouse are crowded together and views over the golf course and the pond are not possible.”

Under the comprehensive plan for the club, its various new buildings “will appear as logical evolutions of the design, character and feel of the original clubhouse dating back to the 1800’s,” according to the application.

“The proposed relocation of the pool unfortunately requires a reconfiguration of the first hole on the golf course,” the application said. “This hole will be reoriented to the north, positioning the green farther away from Country Club Road. A benefit of the new pool location is more space for a safe children’s play area contiguous to the pool and camp pavilion. Camp activities work best in conjunction with the pool.”

The new design for the first hole “orients the golfers so there is no potential for hitting golf balls towards the new pool or play area,” the application said.

“The relocation of the pool will of course require the building of a new pool house with locker rooms for members. A robust landscaping plan is incorporated into the project to provide screening and, equally important, to promote the concept of support structures on a large estate rather than an institutional presence in a residential zone. The pool complex is critical to the success of the project and therefore very important to the continued vitality and success of the Country Club of New Canaan.”

Plans call for the new pool house to be built first, in time for early spring use and to be used as a temporary clubhouse location while that building is renovated. Work would start on the pool itself in September 2018 with a goal of finishing by May 2019. The clubhouse project would be completed by the end of 2019.

The regular membership of the club is capped at 375 New Canaan families, Pratt said.

The application is expected to come before P&Z at the commission’s Jan. 30 regular meeting.