The winter storm that whipped into New Canaan before dawn Thursday dumped an estimated 10.4 inches of snow on the town, as gusting winds blew high snowdrifts and dozens of local businesses and organizations were forced to close with road conditions rapidly deteriorating.

New Canaan Public Schools will be closed Friday, too, officials said, while district offices will open on a 2-hour delay. Town Hall will open at 10 a.m. 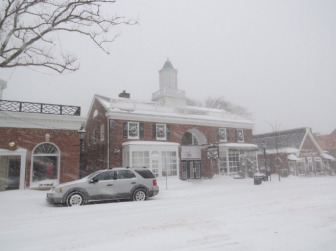 Police Lt. Jason Ferraro, the department’s public information officer, urged motorists to monitor road conditions and stay home if possible in order for state and local highway crews to clear the streets and make them safe. 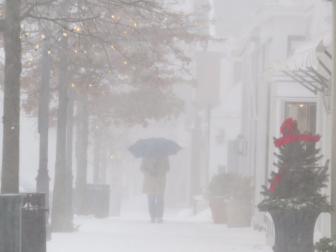 “People should still stay home after it stops snowing and use caution if they must venture out,” Ferraro said.

Fire Marshal Fred Baker warned residents that now is not the time to turn down the heat, just the opposite.

“Know how to shut off our water if you have a pipe burst,” Baker said. He also asked that residents help the Fire Department by shoveling out hydrants that abut their properties. 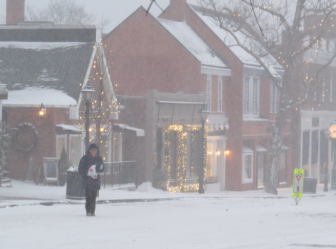 New Canaan municipal and district officials closed Town Hall and the public schools, and the library and scores of local businesses also stayed closed or else opened late or closed earlier than usual.

Carl Franco of Francos Wine Merchants, which has seen every storm from its Elm Street location for 100 years, opened promptly at 8 a.m. but closed late afternoon as the wind intensified.

“Usually people start to venture out by the afternoon because it gets better, but the wind has been picking up,” Franco told NewCanaanite.com. “The town is pretty deserted.” 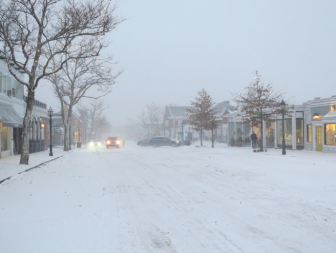 The National Weather Service instituted a Winter Storm Warning for lower Fairfield County through 1 a.m. Friday, as predictions for snowfall steadily climbed throughout the day from six to eight to up to 12 inches.

Eversource reported minimal power outages in New Canaan, while Metro-North said a downed tree in the area of Talmadge Hill prompted the railroad to switch to bus service for the New Canaan branch starting around 3 p.m.

The National Weather Service is calling for a blustery Friday and Saturday, with temperatures barely touching 11 degrees even at midday.