New Canaan Police on Dec. 24 arrested a 36-year-old Park Street woman and charged her with failure to respond to an infraction. She had been cited for motor vehicle charges and did not pay or plead in court.

New Canaan Land Trust officials are calling for volunteers to help check bobcat traps that the state is laying in New Canaan as part of a program to track the animals. The Connecticut Department of Energy and Environmental Protection is looking to get geo-tracking collars as well as tags on 50 bobcats in the state—learn more about the program here. Once trapped and tagged, the bobcats will be re-released into the wild. Volunteers are needed to let out animals that are inadvertently trapped as well as to help with the bobcats. The Land Trust can be reached at info@newcanaanlandtrust.org.

I’m very excited to announce that Doug Zumbach, owner of Zumbach’s Gourmet Coffee, is joining the recently formed NewCanaanite.com editorial board. A past board member of the Chamber of Commerce who had served on the editorial board of Moffly Media publications, Zumbach is a current member of the New Canaan Men’s Club and New England Auto Museum who founded Caffeine & Carburetors. As owner of the iconic Pine Street coffee shop, Zumbach earned the 2016 Merchant of the Year Award from the Chamber.

A reminder that the information session for the Norwalk Mentor Program, “Make a Difference in a Child’s Life,” is to be held 9 to 11 a.m. on Thursday, Jan. 11 in the Lamb Room at New Canaan Library. Coffee and donuts will be served. “Be a mentor. Spend an hour a week with a student.” 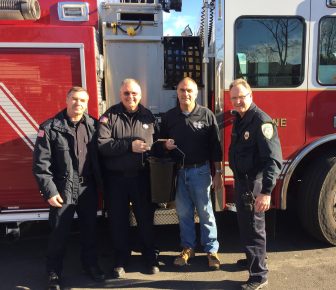 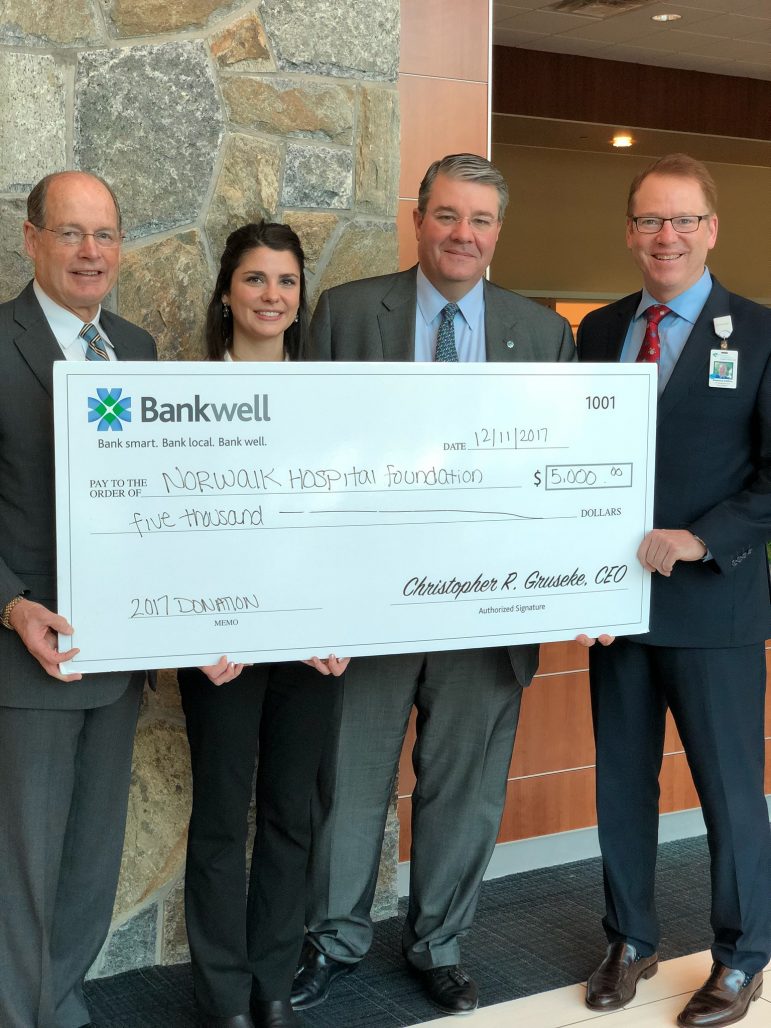 Norwalk Hospital Foundation Receives Donation from Bankwell for Healthier Norwalk Kids The Norwalk Hospital Foundation received a $5,000 donation from Bankwell to support Healthier Norwalk Kids, an innovative, school-based program that teaches children the importance of exercising and eating healthy foods. Healthier Norwalk Kids, formerly known as Project L.E.A.N., was created in 2010. The program was designed to improve the overall health of Norwalk students by teaching them lifelong habits of healthy eating and regular exercise. Registered dietitians from Norwalk Hospital teach students in Jefferson, Kendall, Tracey, Marvin, Brookside and Silvermine elementary schools. Success of Healthier Norwalk Kids is measured by increased knowledge and choices of healthy foods and physical activity among program participants,. Additional benefits include improved attitudes and beliefs surrounding living a healthy lifestyle, and improved behaviors such as increased physical activity and decreased screen time. Notes Brian Porter, Director, Corporate Partnerships, WCHN, “We are grateful for Bankwell’s support of Healthier Norwalk Kids which helps to address the health and nutrition needs of approximately 1,000 elementary school children in Norwalk.“ “Bankwell is proud to support Norwalk Hospital and its mission to teach children about the importance of making healthy lifestyle choices,” said David Dineen, Bankwell EVP and Head of Community Banking. “Through the Healthier Norwalk Kids program, children, their families and communities benefit from an integrated education program focused on healthier living.” Bankwell is a community bank that serves the banking needs of residents and businesses throughout Connecticut. The bank’s mission is to give back to the communities it serves. More about Bankwell can be found at mybankwell.com. 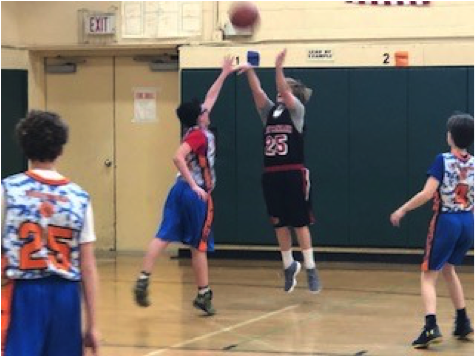 Photo: Ryan Tonghini pops in two of his 10 points in the victory over Greenwich Flame. New Canaan Red 7 Hoops Rolls into the Winter Break The New Canaan 7th grade Red boys’ basketball team rolled into the mid-season holiday break by reeling off 3 straight wins against FCBL opponents. On a snowy Friday night, the Rams invaded Westport (White) and it was all Rams from the tip. Travis Sturcke nailed a 3-pointer on the game’s first shot and the Rams never looked back. Sturcke continued the hot hand as the Rams led 10-2 after the first quarter. In the second half Danny Rogers caught fire, lighting up Westport with four 3-pointers. The interior defense of Holden Busby, Jacob Dowdle and Graham Ladley stifled Westport as the Rams built the lead up to 25 points. The Rams went on to a convincing 44-31 victory as Danny Rogers led all scorers with 19 points and Travis Sturcke chipped in with 16. Saturday the Rams went down to Greenwich to play the Greenwich Flame, a divisional opponent. The game started out slow as a lackluster start had the Rams trailing by a point after the first quarter. Coach Max Reyes regrouped his squad and they came out aggressive in the second. Point guard Connor O’Donnell was tenacious on both ends of the court as he forced multiple turnover that led to scoring opportunities for Jack Hladick, Bear Morris and Aidan McLaughlin. The Rams led at the half and then Ryan Tonghini caught fire scoring 8 of his season-high 10 points in the second half. Danny Rogers pumped in 13 points to lead all scorers as O’Donnell had 11 in addition to Tonghini’s 10. The Rams went on to an easy 42-12 victory. Sunday the Rams returned home to St. Luke’s Athletic Center where they faced the physical Weston Gold 7th graders. In this game, the teams fought over every inch of the court and it was a see-saw battle for the entire first half. The Rams had a 25-23 at halftime as Chris McLallen had the hot hand with some beautiful scoring plays and clutch outside shooting. Holden Busby and Aidan McLaughlin battled the Weston front court on both ends of the floor. In the second half, the Rams pulled away with clamp-down defense by Connor O-Donnell and timely scoring by Travis Sturcke. Forward Caden Bowling scored a key bucket to extend the Ram lead and Busby was perfect (4 for 4) from the foul-line. The Rams ended up with a hard fought 46-35 victory as McLallen and Sturcke each had 15 points and Busby had 10. The Rams head into the break with an overall 11-3 record and 7-1 in the Fairfield County Basketball League. We are looking for good things to come in the second half of the season from this group.

Photo: Voltaire Wade-Greene (left) with students of the Performing Arts Conservatory of New Canaan learning the original dance vocabulary/choreography developed for the Broadway show Hamilton. Voltaire Wade-Greene who is a cast member of the mega hit Broadway show Hamilton completed two workshops at the Performing Arts Conservatory of New Canaan for their private voice students. Voltaire, having been with the production of HAMILTON since its conception helping to develop the show, recently enjoyed his 1000th performance. At the Conservatory in New Canaan, he was able to demonstrate to the students how the music’s lyrics required a new vocabulary of movement that was created by the original choreographer, Andy Blankenbuehler. “Voltaire taught our students the original choreography from the Broadway show explaining that anything less or watered down wouldn’t benefit them” explained the Conservatory’s director Melody Libonati. “He stressed how everyone in the cast became a storyteller of this history musical when they perform the musical numbers and must have a strong, clear intention.” The students were thrilled to learn the staging and dance to the Opening Musical Number and the song, “My Shot.” The Conservatory students were able to ask Voltaire questions about the musical HAMILTON or about anything that they wanted to know about “the business”. The students, ages 6-17 were full of questions for this Broadway performer. The day ended with pictures and autographs! Theatre professionals holding recent workshops at the Conservatory include Broadway Tony winner Kelli O’Hara, 2x Tony nominee Robin de Jesus, Broadway and Disney songwriter David Friedman and movie TV and stage star Lucie Arnaz. The Performing Arts Conservatory is a performing arts school for preschool through adults with professional teachers for voice, acting, musical theatre, dance, fairy tale theatre, piano and guitar. The goal of the school is to awaken, nurture and grow each student's creative abilities and confidence in the performing arts by offering professional training, workshops and exciting performance opportunities. It is located at 70 Pine Street. Registration is online for the winter/spring semester classes which begins on January 2. More information at www.performingartsconservatory.com or by calling 203-966-6177. 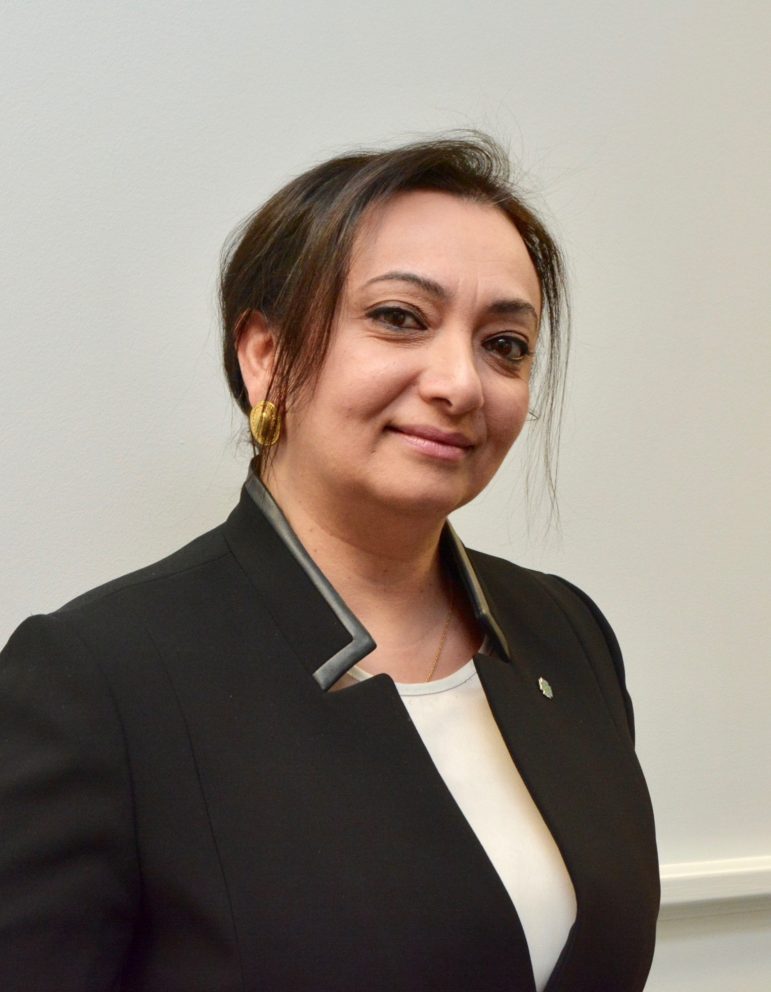 Rita ElKhoury has joined Bankwell as Vice President, Treasury Management Sales Officer. Rita comes to Bankwell with a 15-year career in banking, most recently at Union Savings Bank, where she was Merchant Sales and Services Manager of Payment Services. In that role, she managed the merchant payment processing needs of business customers as well as other Treasury Management services. Rita will actively partner with members of the Bankwell team to grow Bankwell’s Treasury Management business with existing customers and develop new relationships. Notes David Dineen, Bankwell EVP and Head of Community Banking, “Rita brings a wealth of experience and expertise to her role at the bank, underscoring the bank’s commitment to provide business customers with the technology, service and expertise that results in an outstanding banking experience.” Rita received a Bachelor Science in System Engineering from Instituto Universitario Polytechnico Santiago Marino Venezuela. She lives in Danbury, Connecticut with her husband and daughter. Bankwell is a commercial bank that serves the needs of businesses and residents throughout Connecticut. More about Bankwell can be found at mybankwell.com.