Town officials on Tuesday approved the widely discussed expansion of the pool pavilion at the New Canaan Field Club. 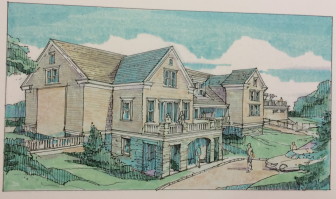 This is the south elevation of the proposed, expanded pavilion at the New Canaan Field Club, from PH Architects of Newtown.

The Planning & Zoning Commission’s vote followed two public hearings at which several neighbors, mostly on Glen Drive, cited what they anticipate to be increased noise and light, more frequent and new uses, and lower property values brought on by a significantly larger pavilion.

P&Z placed 16 conditions on the approval, and though those conditions were not publicly available straightaway—since they were in draft form until the moment of the vote—they appeared to include that pavilion functions end prior to 10 p.m., that the club receive the town planner’s approval for a modified landscape plan designed to provide screening for neighbors, and that no noise-generating construction (nearly everything outside of painting) takes place on weekends. 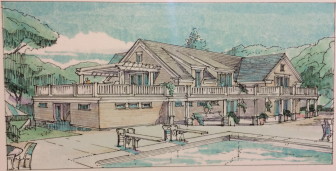 A rendering of the proposed, expanded pavilion at the New Canaan Field Club, from PH Architects of Newtown.

Commissioner John Goodwin said at the regular P&Z meeting that though neighbors objected to the size of the expanded pavilion—plans call for a 65 percent increase in square footage to its existing two floors, plus a new 2,322-square-foot floor and 1,078-square-foot outdoor deck—that the structure is in line with other clubs and appropriate for the Field Club’s property.

Goodwin said he felt the style of the pavilion was attractive and that the club had taken some pains to ensure that porches generally were pointed away from the residential neighbors.

Another look at the screening plan that’s part of the New Canaan Field Club’s application to expand its pavilion. This was presented at the Aug. 29 meeting of the club, by landscape architect Eric Rains of South Norwalk.

“I also feel that, with many apologies to my friends at the Field Club, that the Field Club does need updating,” Goodwin said at the meeting, held in the Sturgess Room of the New Canaan Nature Center.

“I think this is a positive improvement and the applicant stated that in order to attract members, they needed to update the facilities. I think this is an important update and actually think that you could make a very good case that this will enhance home values in the neighborhood. If you are thinking of buying a house in the neighborhood, well, here’s a much prettier, much more attractive club next door than it was before these changes were done.” 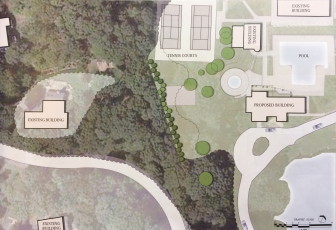 This aerial and diagram shows some of the additional screening that’s been proposed as part of the New Canaan Field Club’s application to expand its pavilion.

Field Club members have said the expanded pavilion is designed to allow the club to host events indoors where it has no suitable space now in its outdated 1960s-era facilities.

One focal point for neighbors objecting to the plan had been that the expanded pavilion would pave the way for far larger, noisier, more disruptive gatherings at the Field Club. Commissioner Michael Crofton sought to expand one condition about use that would prevent any non-club group from renting the facility—even if those same organizations were able to do so now.

“I think the concern was that this new, much enlarged second floor level was going to be used for big functions and so forth,” Crofton said. “And I’m not sure that that condition is sufficiently broad, preventing it from being rented to outside organizations.”

Some commissioners raised the points that P&Z shouldn’t try to prevent the club from hosting in its new facility any events that are allowed to use it now, and also that it made no sense to include conditions in the approval that could not be enforced.