Calling the area of Cross and Vitti Streets a largely neglected section of downtown New Canaan that has potential to serve the community better, officials on Tuesday sketched out a plan to re-imagine its use, density and streetscape, possibly even introducing a newly defined business zone. 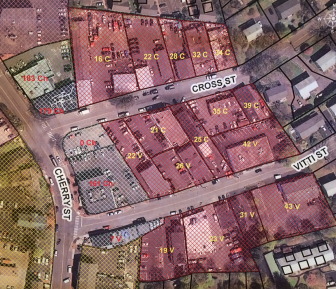 An aerial of Cross and Vitti Streets in New Canaan with each parcel identified. Courtesy of P&Z

As it is now, most of the businesses on either side of Cross and Vitti are part of “Business Zone B”—a designation that allows for heavier-duty commercial use such as for garden supplies, hardware and lumber.

But the way the area has developed—in some ways, as a kind of industrial park within New Canaan, with repair shops, car washes and print businesses—may not be just how it would be mapped out given a choice now, Town Planner Steve Kleppin said at a subcommittee meeting of the Planning & Zoning Commission.

“It’s ripe for change,” Kleppin said during the meeting, held in the Sturgess Room of the New Canaan Nature Center. “It’s the one area that I don’t know if there is anything that couldn’t change over there at some point in time, and there’s already talk of some new development over there, so I think it’s a good idea for us to be out front and really decide how do we want this area to look in the future, what’s the potential of it.”

Kleppin said he has money in the budget now to bring in a planning/design consultant to sketch out some designs and then oversee a series of public meetings and workshops for feedback from residents.

“The idea is, what if those parcels were empty, what if there was nothing there now: How would we like to see them built?” Kleppin said. “What would we like the uses to be in that area? How could we benefit the rest of the town and the downtown by redesigning that area and taking a fresh look at uses?”

If hired, that consultant’s work could be done well ahead of next summer, the start of the next fiscal year, Kleppin said.

Subcommittee members including Kent Turner supported the general plan and urged Kleppin to remain mindful of abutting residential neighborhoods that would need a green buffer between them and a newly conceived business district.

During a discussion about where a new midblock crosswalk across that upper portion of Cherry Street may go, Commissioner Dick Ward got clarification that one prospective site for the Post Office is at 16 Cross St., current and longtime home of New Canaan Lawn Equipment.

During an interview with NewCanaanite.com following Tuesday night’s meeting, Arnold Karp of Karp Associates—himself a principal of the company (3M Capital Trust LLC) that in April purchased the .64-acre property at 16 Cross St.—said that a plan has been floated to the Post Office for the agency’s required 3,600 square feet of ADA-compliant, first floor space. Karp said his group is waiting for a response from the Post Office on that idea.

Told of the P&Z subcommittee’s discussion, Karp said he was pleased to hear that what the town planner and commission were envisioning—a possible mixed use—dovetailed nicely with one long-term idea 3M has for the property.

Deferring to the commission and town, Karp said he would “welcome P&Z to come up with what they would like as far as guidelines, and to hear what citizens want.”

At the meeting, Kleppin said the area could be far more attractive for current neighbors than what they see now.

“Certainly, the intent is to raise this area up from its current state of affairs, because it’s not an attractive part of the town as it could be” Papp said.

One thought on “Cross and Vitti Streets: ‘Ripe for Change’”