According to manager Janet Bacco, New Canaan Lawn Equipment still has 2.5 years left on its lease. 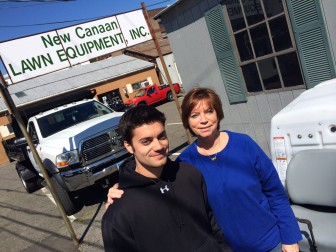 New Canaan Lawn Equipment's James and Janet Bacco (mother and son), at the Cross Street property. The property itself recently was sold. The business has a lease that goes out 2.5 years, said Bacco, a 1976 New Canaan High School graduate.

“That’s the headline: ‘We are not going anywhere.’ Contrary to rumors, we are here,” Bacco, a 1976 New Canaan High School graduate, told NewCanaanite.com.

The property on April 11 was conveyed for $1.7 million from John and Anthony Frattaroli to 3M Capital Trust LLC, according to a record of the transfer at the Town Clerk’s office.

According to the Connecticut Secretary of the State, that LLC’s principal is New Canaan’s Arnold Karp, of Karp Associates. The multifaceted building firm specializes in “renovations, construction management, distinguished custom homes, and real estate consulting,” according to its website.

Reached by NewCanaanite.com, Karp said no final determination has been made for the property’s long-term future and that currently different options are being examined.

New Canaan Lawn Equipment has been in business since 1970 and was founded by Bacco’s father, John LaPolla (who turned 90 on April 21). Other businesses on the Cross Road property recently sold include Peter Lanni Inc., Edwardian Dog Grooming and Lisa’s Classic Cuts, Bacco said.