Though a judge this month found that town zoning officials acted properly in granting a variance designed to allow for the restoration of a long-neglected chapel on Ponus Ridge, the historic structure’s fate is unclear, as it remains tied up in multiple lawsuits brought by a New Canaan woman. 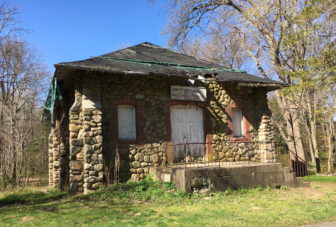 Once a hub of its community, the Ponus Ridge Chapel is disused, dilapidated and at the center of lawsuits. Credit: Michael Dinan

In a decision issued April 11, Superior Court Judge Charles Lee affirmed the New Canaan Zoning Board of Appeals’ unanimous vote three years ago to allow for the rehabilitation of the legally nonconforming, 1911-built Ponus Ridge Chapel (see Lee’s full decision at the end of this article).

Plans call for the conversion of the dilapidating structure into a guesthouse by its neighbors to the south, the Hayeses, with an easement to the chapel property at 424 Ponus Ridge for a parking space and septic system (at .14 acres, the chapel’s lot is itself too small).

The president of the association that owns the building, now deceased, in 2012 had entered into an agreement with the Hayeses whereby the property would be transferred to them, in a complicated arrangement also involving New Canaan Library, following the organization’s dissolution.

However, another member of the Ponus Ridge Chapel and Community Association—a group that hasn’t met in decades (the chapel itself hasn’t been used in 40-plus years)—neighbor Elizabeth Weed of 434 Ponus Ridge, filed two lawsuits designed to halt the proposed transaction.

Both lawsuits name the Hayeses, with one filed against the ZBA for granting the variance, and the other filed against the association’s president, a woman named Edythe Sherwood, arguing that she failed to obtain the consent of the group’s board of directors, making the proposed transaction is invalid. Sherwood passed away last March.

Last month, Lee ruled against Weed in nine of 10 counts in the Sherwood lawsuit, and she promptly filed a motion to reargue.

It isn’t clear now whether Weed will formally appeal either or both of Lee’s decisions. She declined to comment when reached by NewCanaanite.com. Her attorney, New Canaan-based Brendan O’Rourke of O’Rourke & Associates LLC, could not be reached for comment.

In any case, Weed’s motion to reargue further complicates already thorny legal matters and ties up a process that advocates for Hayeses, including preservationists and historians, would like to see through—namely, the transfer and restoration of the once-loved building that has deteriorated visibly through four decades of neglect.

Brendan and Ainsley Hayes have been represented by attorney Amy Zabetakis of the Darien-based Rucci Law Group.

Asked for his thoughts on the lawsuits, Brendan Hayes told NewCanaanite.com only that he and his wife “continue to be very focused on saving the building in whatever way is ultimately best.”

“We have made an offer, as an interim step, to jointly pay to have a roof put on, with Mrs. Weed. We’ve offered to split the cost of putting a roof on with Mrs. Weed, putting aside any disputes we may have.”

Though that offer initially was made six months ago and reiterated this month, Weed has not responded, according to Hayes. (Note: Weed also filed a lawsuit against the Hayeses, later withdrawn, when they secured approval from the ZBA in 2014 for a modest expansion of their current, antique home at the corner of Ponus Ridge and Davenport Ridge Road.)

According to the 1951 “Landmarks of New Canaan” book from the New Canaan Historical Society, the chapel is what ultimately came out of a movement that started in 1902 to “maintain the undenominational Christian worship of God, at or near Ponus Street.”

Located close to the road on the west side of Ponus between Frogtown Road and Thurton Drive, the chapel would play a prominent role in New Canaan for several decades. For example, Thurton writes, when St. Luke’s School was located where New Canaan Country School now stands, Ponus Ridge Chapel “was used for religious services by the school when its [own] chapel had burned.”

Weed in filing her motion to reargue the Sherwood lawsuit argued for “demand futility”—saying essentially that there’s no merit in Lee’s finding that she should have brought her case to the board of directors, because there would have been no point in doing so. Weed now has a window in which to appeal both of Lee’s decisions in the separate lawsuits.

Regardless of their outcomes, it remains unclear just how the chapel at this point would end up in with the Hayeses, officials say. Under the terms of the association’s own Articles of Incorporation and bylaws, its assets go to the library if the group itself dissolves. Since Sherwood, the association’s president, has passed, it isn’t clear just who has the authorization to dissolve it. To this point, the court has not been asked to address the question of dissolution. Other possibilities include “judicial dissolution” by the court, or if the state becomes property owner through the charitable use division of the attorney general’s office.

7 thoughts on “Despite Court’s Decisions, Lawsuits Tie Up Restoration of Ponus Ridge Chapel”