New Canaan’s long and storied history has produced its fair share of characters and legends, some apocryphal, some true. One such legend and character is Stephen Weed and the story of his Revolutionary War-era fort.

Weed was a Canaan Parish soldier in the American Revolution who helped defend New York against the British under the command of Captains John Carter and Daniel Benedict, historians say. According to 1951’s “Landmarks of New Canaan,” published by the New Canaan Historical Society, he was captured and ultimately imprisoned in the notorious Sugar House prison in New York City. 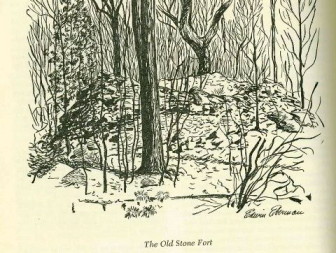 A 1948 illustration of the ruins of Weed’s fort.” credit=”NC Historical Society

Eventually Weed was released and returned home, though as a shell of his former self: His battlefield experience and subsequent imprisonment had caused postwar syndrome. Believing the British intended to raid Canaan Parish by way of the Noroton River valley, Weed was determined to defend the area. Seeking a strategic location on a hill overlooking the eastern bank of the Noroton River, Weed is said to have built a large stone fortification, replete with an underground area where he could store ammunition. 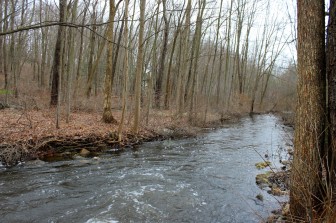 Although the Revolutionary War ended in 1782, Weed–seemingly suffering from paranoia–continued to man his post for years after the British surrendered. He became something of a local curio, as visitors would gather at the fort to watch Weed run through drills, always looking down river toward the south for an invasion that would never come.

Fast-forward a couple of centuries.

June Pryor moved to New Canaan in 1971. One of the first things she noticed about her Frogtown Road property was a huge mound of rocks off the corner of her sunroom. 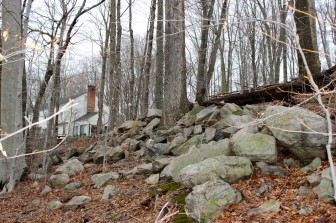 Is this pile of stones all that remain of Weed’s fort?” credit=”Terry Dinan

“They told me that they had to build the foundation of this house twice because of water coming down from the hill,” Pryor told NewCanaanite.com. “I assumed that the rocks were from the foundation.”

Shortly after settling in, Pryor was having some work done on her property. The contractor on the job asked her if she would be willing to part with some of the stones from the huge rock pile in her yard.

“Being a city girl, I told him ‘Yes,’ not knowing that rocks are like gold here,” Pryor said. “He made off with about seven or eight truckloads.”

Did the contractor make off with Weed’s fort? 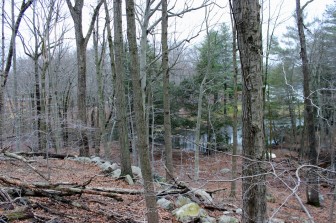 The view of the Noroton River valley from June Pryor’s property.” credit=”Terry Dinan

According to historical documentation, the location of the fort would put it just south of present-day Frogtown Road and east of the Noroton River—almost exactly where Pryor’s property is located. The flow of the river has shifted slightly west of where it did in Stephen Weed’s day, and the area—once nothing but farmland—is densely packed with trees. Even so, when standing next to the still-substantial pile of stones cascading down from Pryor’s yard to the sloping woods below, one has a perfect vantage point of the former Noroton River valley.
​