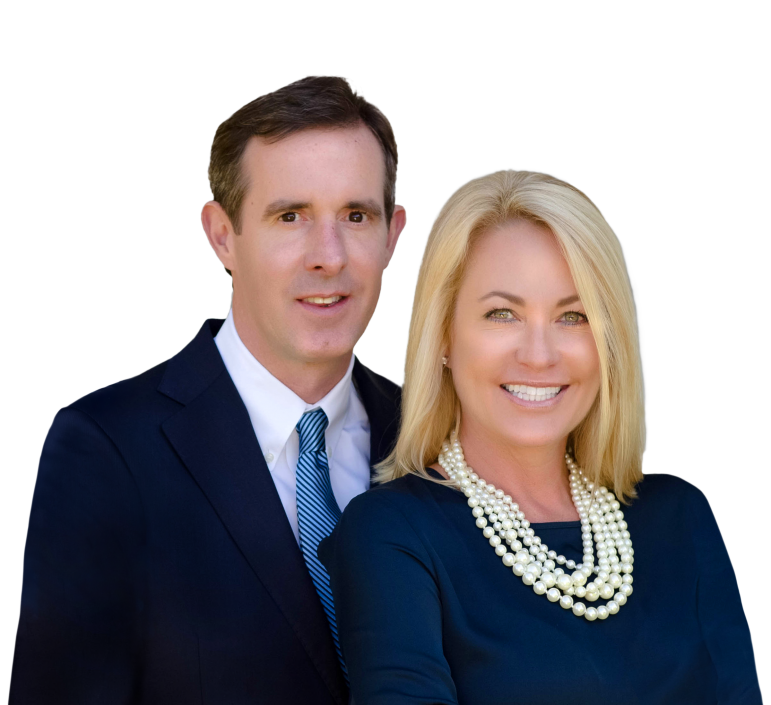 William Pitt Sotheby’s International Realty has announced that seasoned real estate veterans Jaime and Kendall Sneddon, operating together as The Sneddon Team, have joined the firm and will be based in the company’s New Canaan, Conn., brokerage. The top-producing team was recognized in 2017 by trusted real estate news source REAL Trends as the No. 6 team in the state of Connecticut, based on achieving $62.4 million in total closed volume in 2016. The Sneddons stated that they chose to move to William Pitt Sotheby’s International Realty for its broader reach both regionally and globally, with access to buyers and sellers around the world through an extensive network of affiliated firms, as well as its sophisticated marketing, one-of-a-kind media partnerships and unique relationship with Sotheby’s auction house. “Joining forces with William Pitt Sotheby’s International Realty empowers us to provide our clients with every advantage possible,” said Jaime Sneddon. “I am so excited to welcome such accomplished and extraordinary sales professionals to our firm,” said William Larkin, manager of William Pitt Sotheby’s International Realty’s New Canaan brokerage. “The Sneddon Team brings a passionate devotion to service, an incredible depth of knowledge and a tremendous record of success in Fairfield County. I look forward to supporting their business with all of the vast and powerful resources available through our company and brand.” Prior to entering real estate, Jaime served as Group Head of Marketing at Intuit and Vice President of Small Business Services at American Express for over a decade. Kendall served as Vice President at American Express, working directly for the Chief Marketing Officer. In 2005, they opened their own real estate brokerage firm, Project Real Estate, and in the years since have built a robust multi-million-dollar business. They were most recently affiliated with Halstead Property, where they have been consistently recognized for their unprecedented success including Chairman’s Elite Club, Producers Council, No. 1 Agent Team in closed units and closed dollar volume, and Top Listing Team. “Jaime and Kendall’s diverse professional background, including marketing, advertising and business development, has become a huge advantage to their clients,” Larkin said. “They both have a clear understanding of how to maximize value, with a comprehensive and hands-on approach combined with tremendous skill in pricing, strategy and negotiation, all of which leads to the best possible real estate experience. We are thrilled to welcome a whole new wealth of expertise in lower Fairfield County to our firm.” 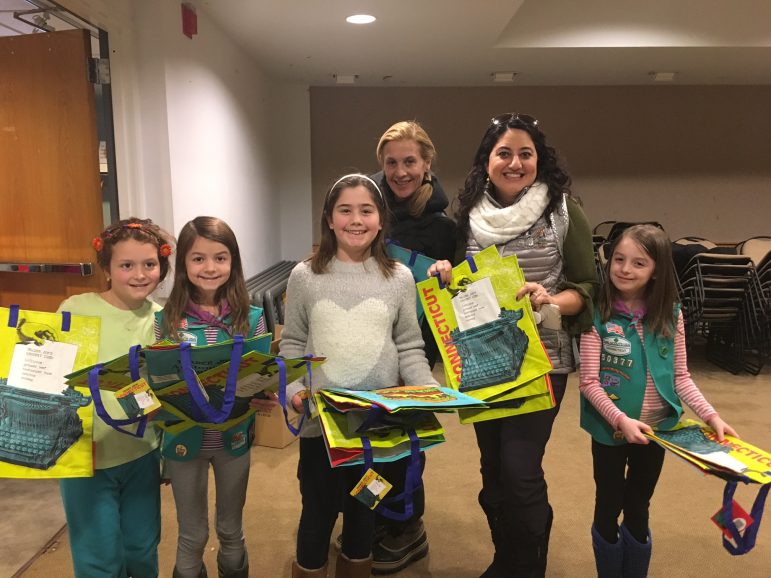 More than 70 people attended Planet New Canaan's January 7th screening of the documentary "Bag It", hosted by the New Canaan Library. Attendees included all manner of New Canaan residents, from elementary, middle and high school aged students all the way through to senior residents. "Bag It" explores the profound impact of disposable plastic on our environment, and provides viewers with tips on reducing plastic use; it was followed by a panel discussion on plastics and the environment. Attendees were handed reusable grocery bags by members of Girl Scout Troop 50377 as they departed the event. Planet New Canaan is a nonpartisan group, founded by local community members, committed to bringing awareness about the environmental issues facing New Canaan and the broader world, both today and in the future, through educational presentations and community outreach and initiatives. Anyone interested in watching the movie can check out a copy from the library, and anyone interested in learning more about Planet New Canaan can find the group on Facebook. Pictured here are members of Girl Scout Troop 50377 along with Shiva Sarram and Meredith Bergman.

(Photo L-R: Erin McDonough, Director of Community Relations & Marketing, The Open Door Shelter; Jeannette Archer-Simons, Executive Director, The Open Door Shelter; Vicky Maccaro, Bankwell Branch Manager in Norwalk.) Help others to stay warm this winter! Bankwell and Fat Cat Pie Co. are helping to provide support to the hundreds of individuals and families that visit the Open Door Shelter in Norwalk each winter seeking assistance from the community. Join us for an evening of food, wine and fun on January 31st from 6-8 pm at Fat Cat Pie Co., located at 9-11 Wall Street in Norwalk. Bring a friend and enjoy a relaxing evening while feasting on thin crust pizza, artisanal cheeses, delicious salads and some of Fat Cat’s acclaimed wines. You can register for the event at www.opendoorshelter.org/events or by calling Erin McDonough at the Open Door Shelter at 203-866-1057 x129. The cost is $50/person. If you are unable to attend the event, please consider donating to help those in need through the Open Door Shelter website. Bankwell is a community bank that serves the banking and lending needs of residents and businesses throughout Connecticut. The bank’s mission is to give back to the communities it serves. More about Bankwell can be found at mybankwell.com. 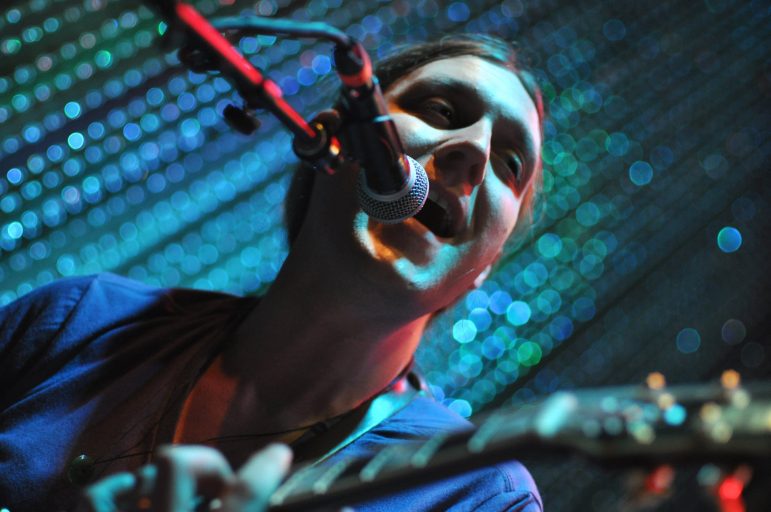 The Carriage Barn Arts Center will be hosting an evening of live jazz music featuring local musician Michael-Louis Smith and friends. Presented by DiRusso & Brooks Law Group, the evening will include a lively performance that blends jazz, funk and afrobeat. The current photography exhibit will also be on view, featuring the work of several local artists. Doors open at 8pm and live music from 8:30-10pm. $15 advance tickets are for sale at www.CarriageBarn.org/jazz. Tickets are $20 at the door. Guitarist Michael-Louis Smith is a bandleader and recording artist who tours nationally at venues such as LA’s Troubadour Club, NYC’s Apollo Theater and Vermont’s Discovery Jazz Festival. His ensemble will showcase a medley of jazz, funk and afrobeat. “We had a great time performing at the Carriage Barn last June and are excited to return. Bringing live jazz music to my hometown of New Canaan and playing at a great venue like the Carriage Barn is a just awesome” says Smith. Smith and his family moved to New Canaan from New York City three years ago. Hilary Wittmann, Executive Director of the Carriage Barn says “This is a great opportunity to bring live jazz to New Canaan and showcase talented local musicians alongside the work of local artists. We’re so grateful to local business DiRusso + Brooks for supporting this initiative.” The mission of the New Canaan Society for the Arts is to promote the visual and performing arts, to enrich the community through exhibitions, education, and cultural experiences, and to operate the Carriage Barn Arts Center. The Carriage Barn Arts Center offers artists opportunities to exhibit their work in an exceptional gallery space in a unique nineteenth-century stone barn. “The Primacy of Color III” exhibit runs through June 23, 2017. Gallery hours are Wednesdays-Saturdays, 10:00 AM – 3:00 PM and Sundays, 1:00 – 5:00 PM., phone: 203-594-3638. Photo credit: Christina Saburro

Members of the Parking Commission on Thursday night voted to extend to the end of January a deadline for those on waitlists for the three commuter parking lots in New Canaan—Lumberyard, Richmond Hill and Talmadge Hill—to pay a $10 renewal fee. It originally had been due Dec. 29, officials said. The new deadline is absolute, commissioners said, so that those who do not pay the renewal fee will lose their places on the waitlists. 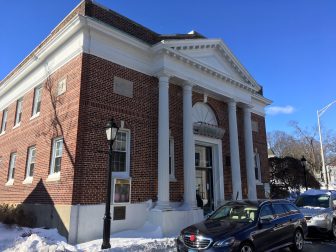 In a strange property transaction, the commercial building at 87 Main St. in New Canaan, formerly home to Thali restaurant, sold for $1.7 million on Dec. 29, according to a transfer recorded in the Town Clerk’s office. The same building had sold for $4.2 million in 2006, purchased at that time by a LLC controlled by a New Canaan man. He appears to have lost the property in a foreclosure in January 2016, when it was assigned to an entity called ‘ACM Rams Fund IV B LLC’ in New York City. Last month, the same man purchased the building back from that company for the smaller amount.

Residents in favor of starting school later in the morning have launched a website and it includes an online petition requesting that “the New Canaan Board of Education follow the advice of all major medical associations and change school start times for Grades 7-12 to 8:30 a.m. or later.” Currently those grades start at 7:30 a.m. 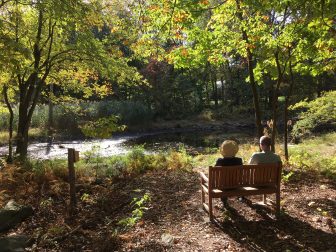 The New Canaan Land Trust announced Thursday that a 2.2-acre gift has been added to its network of protected land in town. Donated anonymously, the property is adjacent to Land Trust holdings on Rosebrook Road and Bittersweet Lane, creating a combined 15 acres that will remain forever as a wildlife sanctuary. The organization now holds a total of 390 protected acres in town, including the newly opened Still Pond-Silvermine Preserve.

According to a budget presentation from Superintendent of Schools Dr. Bryan Luizzi, 82 percent of New Canaan High School seniors were accepted into their top three choices of colleges last year.

Luizzi presented a $90.7 million budget proposal to the school board on Monday night, a 3.5 percent increase from current spending. The figure is far higher than the Board of Finance guidance from October of 2 percent increases for town departments. Asked about the proposal during a media briefing Thursday, First Selectman Kevin Moynihan said, “Ouch. He probably didn’t get the memo.”

The Board of Selectmen on Tuesday voted 3-0 to reappoint Pam Crum to the Parking Commission for a three-year term expiring Dec. 1, 2020. 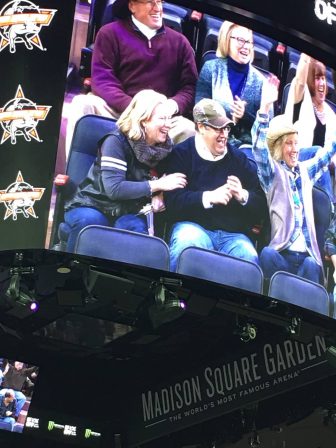 Liz and Rob Mallozzi, former first selectman of New Canaan, were caught on the Kiss Cam at Madison Square Garden on Jan. 6, 2018.

Liz and Rob Mallozzi (on the left) were caught by the Kiss Cam at Madison Square Garden last Saturday night. Also pictured are Steve and Sue Benko and Cheryl Pickering-Jones. The venue hosted a Professional Bull Riding “buck off” event.

Luizzi had kind words for the Friends of New Canaan Hockey as the Board of Ed at its meeting this week voted unanimously to accept a $16,810 donation for Boys Hockey for the current season.

Finally, in the aftermath of the holidays, the Open Door Shelter Food Pantry is in need of restocking, and Bankwell has announced that its branches will serve as collection points for donations from Jan. 15 through the end of February. The bank is inviting the community to bring canned and non-perishable donations to any of Bankwell’s Fairfield County locations during that time, including Wilton, New Canaan, Norwalk, Fairfield and Stamford.