The “Covia building,” formerly known as the “Unimen building,” at Elm and Grove Streets, sold for $6,925,000, according to a property transfer recorded Oct. 9 with the Town Clerk. The buyer is TBG/Elm Street LLC, a company whose principal is Michael Besen, according to Connecticut Secretary of the State records. The Goshen resident is founder and CEO of Manhattan-based Besen Partners. Besen’s companies “have brokered the purchase and sale of over $7 billion of real estate assets, the management of over 5 million square feet of real property and the purchase and ownership of over $200 million of assets for his own account and that of his co-investment partners,” according to a bio on the firm’s site.

New Canaan Finance Director Sandra Dennies is to retire at year’s end, First Selectman Kevin Moynihan said during Tuesday’s Board of Selectmen meeting. Town officials “were surprised” to receive an email from Dennies announcing her retirement, Moynihan said during the meeting, held at Town Hall. “I’d like to thank Sandy for a terrific job in the past couple of years,” he said. “We are sorry to lose her.”

The New Canaan Community Foundation is taking online nominations through Oct. 11 for its Volunteer Recognition Awards, spotlighting “unsung heroes.” Designed to celebrate volunteers rarely rewarded for their selfless efforts, the awards are a chance to recognize those who give of their time to benefit the New Canaan community and who deserve appreciation and recognition for their impact. Here is the online nomination form. The committee will review all submissions and make decisions by early November.  Winners will be recognized at an awards event to be held at 5:30 p.m. on Nov. 21 in Town Hall.

New Canaan received two responses to the RFP for the sale of Vine Cottage, from Arnold Karp and Robert Cuda, according to First Selectman Kevin Moynihan. It isn’t clear what the parties are proposing to do with the buildings—town officials denied a request to review the RFP responses, saying they’re part of ongoing negotiations.

A new business, Eyes on Elm, has opened on Elm Street in part of the space formerly occupied by design solutions. Owner Victoria Considine grew up in upstate New York and developed an interest in medicine while volunteering at the hospital where her parents worked throughout high school. She graduated from Cornell University with a bachelor’s degree in Human Biology, Health, and Society, and earned her doctorate of Optometry at the State University of New York College of Optometry in Manhattan, where she specialized in pediatrics through my 4th year internships. She worked in New York City for two years at a pediatric ophthalmology practice, specializing in strabismus and amblyopia. 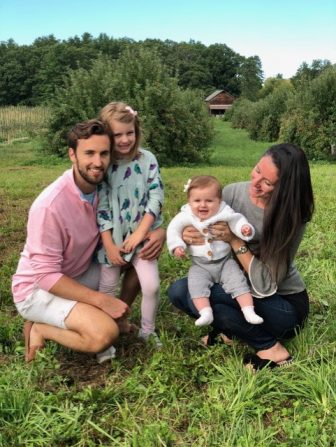 Victoria Considine with her husband and two young daughters.

“I loved working there with kids but when my family moved to Westport, I wanted to work closer to home so I took a job working at a local optical shop,” Consodine told NewCanaanite.com in an email. “This is where I developed my love for fashion eyewear. I am excited to combine my passion of optometry with fashion eyewear at Eyes on Elm. I am also thrilled to be located on one of the prettiest streets in Connecticut. I greatly look forward to becoming part of the New Canaan community and participating in the fun upcoming events like the Halloween Block Party and the Holiday Stroll. I currently live nearby in Westport with my husband, who I met at Cornell, and our two young daughters. When we’re not working, we love to ski, swim, travel and spend time with our family and friends.”

The 2nd Annual New Canaan Squash Opener is to be held on Saturday, Oct. 19 at St. Luke’s School and the Country Club of New Canaan. It’s for kids ages 10 and up and adults too—go to http://www.ncsquash.com for more details and to register. 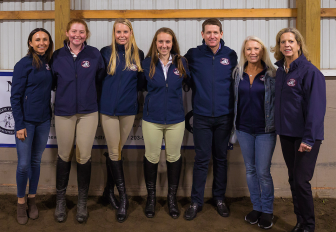 Police at 4:20 p.m. Monday charged a 31-year-old Waterbury man by warrant with second-degree failure to appear after stopping him for speeding on Old Stamford Road. He had been charged in the past for motor vehicle-related offenses. New Canaan Police additionally charged the man with driving while under suspension and cited him for speeding (40 mph in a 25 mph zone).

Here are some upcoming events to put in your calendar:

The New Canaan Building Department on Oct. 3 issued an after-the-fact permit for about $190,000 in work at 36 Brookwood Lane. Renovation and addition work at the 1964-built Colonial had already started, the permit said. It included both exterior (update front porch, new back patio, pergola and grill on to of new patio) and interior (new entry door, relocate existing powder room, update master bath/his and her closet and update bathroom on bedroom #3) alterations. The permit’s issuance generated about $2,500 in fees for the town. 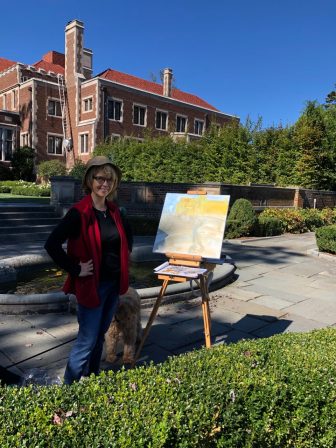 Finally, on Saturday, Oct. 5, 30 artists participated in “Capturing New Canaan,” organized by the Carriage Barn Arts Center and sponsored by Houlihan Lawrence. On the crisp and sunny morning, artists brought easels, canvases or cameras to locations around New Canaan and worked “en plein air” sketching, painting or photographing at Waveny, Mead and Irwin Parks, downtown, locations such as The Glass House, New Canaan Nature Center and New Canaan Historical Society. The artwork will be exhibited and for sale at the Carriage Barn Arts Center from Oct. 24 to Nov. 2. All are welcome to attend the opening reception with the artists from 5:30 to 7 p.m. on Thursday, Oct. 24.