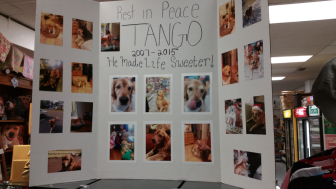 A memorial dedicated to Tango has been set up at Mackenzie’s.

Tango, a handsome 7-year-old golden retriever belonging to Phyllis Weinstein of Mackenzie’s, died Thursday, within days of an unexpected diagnosis of an aggressive cancer. A makeshift memorial has been set up in the South Avenue shop for locals to say goodbye. “He was like the mascot of the store,” said Jim Berry, a welcome face behind the counter. “He was always here, mingling with the kids.” Those kids include hundreds of Saxe Middle School students, who for years have carried on a tradition of depositing their school bags outside Mackenzie’s after school, and getting some candy or other items inside. Tango was a regular at Mianus River Park in Stamford with Weinstein—a dog couldn’t want a more dedicated owner—and the outdoors-loving animal liked to hike, fetch and swim.

Police have identified the woman accused of stealing clothes from Athletic Shoe Factory on Forest Street as a 17-year-old New Canaan girl. Since she’s 17, police withheld her name (and we removed the video surveillance photos that had been published). 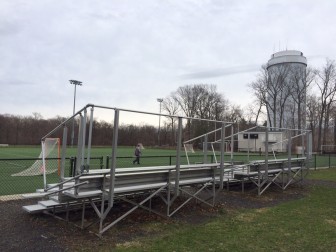 These stands at the water tower turf field will be replaced. Credit: Michael Dinan

Good news for New Canaan’s lacrosse families: New bleachers will be installed at the water tower turf field. The new stands will sit a bit higher, so that even on the lower benches, spectators will be able to see above the chain-link fence. 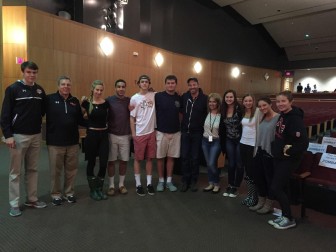 We’re hearing that early estimates from CERT put the total number of attendees to the first Caffeine & Carburetors of 2015 downtown at 4,400 (that’s people, not cars).

It seems that the black bear which had been spotted on the rear deck of a Marvin Ridge Road home on April 4—the one scared off by a rescued pit bull, Buddy, who helped alert his owner—had been seen earlier in Darien and hit with a tranquilizer dart which didn’t finish the job. 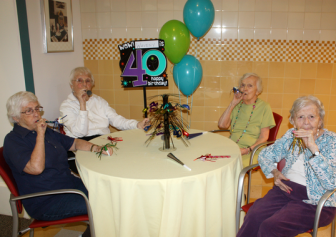 Welcome to New Canaan, Clinton Jarvis. The 33-year-old Bridgeport resident is New Canaan’s newest police officer. He has worked since 2011 as an officer for the Bridgeport PD. A graduate of Bullard Haven Technical School and now is working his way toward a bachelor’s degree in criminal justice and sociology. 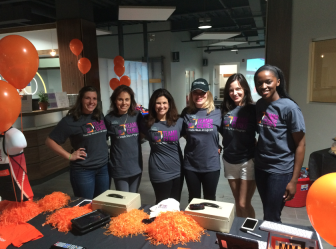 Inside Halo on April 19 for a MMRF Tri-State Pep Rally.

Halo Studios held a MMRF Tri-State Pep Rally on Sunday, giving participants a chance to register for a Tri-State 5K on June 7, win free gifts and donate to receive a Vineyard Vines Team for Cures hat. 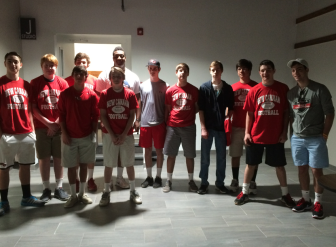 April 22 is Earth Day and the New Canaan Conservation Commission has organized this year’s town-wide celebration. At 9:15 a.m., First Selectman Rob Mallozzi will read a proclamation in front of Town Hall, where there will be a ceremonial planting, as well, sponsored by the New Canaan Beautification League. A list of all Earth Day events can be found in a PDF at the end of this post.

The New Canaan Police Department is on track to get its own K-9 Unit dog some time this summer. A German shepherd dog has been secured and soon will undergo training, Police Chief Leon Krolikowski said at the April 15 Police Commission meeting.

Fresh off their second consecutive win in this year’s Connecticut Food Association’s 14th Produce Awards Competition, Heavenly Bites, a Wilton-based maker of bite-size cakes, will stop by Walter Stewart’s Market from 11 a.m. to 2 p.m. Friday for a demo and tasting.The company’s Lemon Drop cake bite took first place in the Dessert category in a field of 30 entries. Walter Stewart’s will offer the award-winning local cake-bites at a special promotional price of Buy One Get One for 50 percent off to coincide with the demo.