The Sept.13 installment of the popular car show “Caffeine & Carburetors” has been cancelled, according to town resident and event founder Doug Zumbach. The final scheduled show of the season, Oct. 18 at Waveny, is on track for now.

Though a New Canaan woman with COVID-19 has challenged First Selectman Kevin Moynihan that in her case the virus was transmitted from out-of-state, he doubled down on that assertion during a press briefing Thursday. When asked whether he still believes the case does not represent local transmission, Moynihan said yes. “I have to go by what our Health Department believes,” he said, adding: “I still believe we are not seeing local transmission. We are seeing travelers from out of state of out of town, including Stamford in particular.”

Since reporting a sharp increase in applications to build pools on residential properties in the first half of the year, the New Canaan Building Department received has already received three more applications.

Town resident Kim Hall started a website called COVID Hope to collect “stories of people and organizations in New Canaan who have shown incredible acts of kindness, leadership and dedication in the face of the Covid-19 pandemic.” 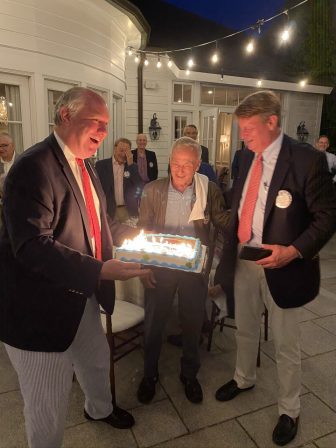 The Exchange Club of New Canaan on Tuesday held its first meeting since early March, at Woodway Country Club, according to member Jim O’Hora. More than 40 members attended, and past President Marty McLaughlin was celebrated for his 90th birthday.

Meals on Wheels of New Canaan is seeking volunteer drivers. More information and a sign-up for can be found here.

Finally, members of the New Canaan Fire Department responded to a call last week about a dog on Millport Avenue with its head stuck in fence slots. Arriving, firefighters found a dog that was stuck in a wooden pallet, and used spreaders to free the animal, officials said. The frightened dog bit a firefighter, though the animal is up-to-date on its shots, officials said.