New Canaan Police Chief Leon Krolikowski and New Canaan Health Director Jenn Eielson will lead a “mask education walk” at 12 p.m. Friday. It will start outside the Playhouse on Elm Street and will include handing out masks and educating people on the importance of wearing them.

The New Canaan Rotary Club’s 35th annual Lobsterfest will be “contactless” this year with dinners available for pickup on Oct. 16 and 17. It’s a major fundraiser for the service organization’s grant program benefitting local and area nonprofits. Ticket information here.

The town spent another $305.50 last month on legal fees associated with the proposed stone terrace on God’s Acre—a plan that has stalled amid a property ownership dispute with the First Congregational Church of New Canaan. The 1.3 hours (at $235 per hour) that Town Attorney Ira Bloom spent on the matter included an “email from [First Selectman Kevin] Moynihan regarding God’s Acre history,” “review of emails and letter, research, telephone calls with K. Moynihan,” “review of statement” and “emails from [Tucker] Murphy,” according to a copy of a legal bill from Bloom’s firm, obtained by NewCanaanite.com through a public records request. Murphy, a member of the committee behind the “Founders Terrace” proposal, now works for Moynihan. 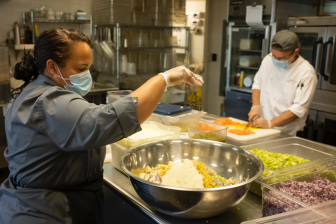 Grace Farms through its “Relief Fund for Connecticut” amid the COVID-19 pandemic has sourced, donated, and delivered more than 2 million pieces of PPE, and 100,000 pounds of food have been provided to more than 39,000 individuals and families.

It’s been nearly one year since a sanitarian from the New Canaan Health Department inspected Spiga restaurant on Main Street, according to records on file at Town Hall. Unannounced inspections cover food storage and preparation, as well as employee and facility cleanliness, among other areas. Here’s a list of local restaurants that haven’t been inspected in the past six months, including a notation on the their last inspection by the Health Department, according to municipal records:

The Board of Selectmen on Tuesday voted 3-0 to authorize the Town Clerk to hire part-time workers at a rate of $16 to $23 per hour to assist with absentee ballots for the Nov. 3 election. Those hired include five Democrats, five Republicans and two unaffiliated voters, Moynihan said. They are: Alica Torres, Ted Shaker, Claude Colabella, Phil Gerrity, Lili DeRossi, Gion Luca, Kevin O’Connor, Wyteria Montague, Eileen Morley, Carly Ross, Sharon Wynter and Mitchell Dipanni. 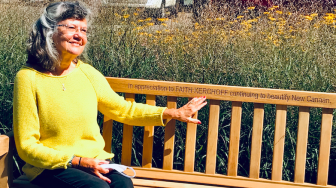 Faith Kerchoff on a bench dedicated to her, in the new Mead Park plaza. Contributed

New Canaan resident Faith Kerchoff had a bench dedicated to her in the new Mead Park plaza off of Richmond Hill Road. It’s in appreciation for all her work around town, including in the Lee Garden, Mead Park plaza, Gold Star Walk, train station parking lot and traffic island by the Pine Street mailboxes.

The New Canaan Police Department is conducting a survey—it can be found here—as part of its annual accreditation with the Commission on Accreditation for Law Enforcement Agencies, or ‘CALEA.” 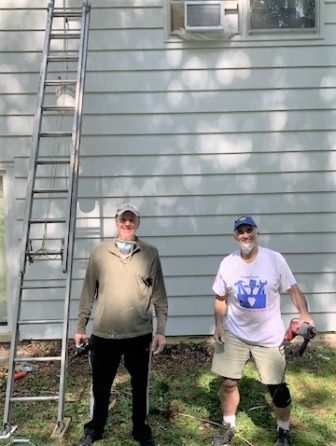 L-R: Exchange Club members Jim Cullinane and Paul Price take a quick break before working on the back of the home. Photo by HomeFront

Volunteers from the Exchange Club of New Canaan on Sept. 12 joined 10 other groups revitalizing 12 low-income homes across the Connecticut during this year’s re-scheduled HomeFront Day. Exchange Club volunteers put in two days of hands-on work, making exterior repairs to homes.

One of the letters of appreciation for the New Canaan Police Department that was shared at last week’s Police Commission meeting came from Wendy Hilboldt, Kaitlin Lowe and Jack Laibe of New Canaan Emergency Medical Services. It said, in part: “Lt. Marc DeFelice, along with Officers Chris Dewey and Erin McCarthy, showed tremendous professionalism as they helped lug equipment up and down stairs as well as assist us with a difficult CPR scenario. Their calm demeanor, seamless assistance and efficient actions in moving our patient to the ambulance were greatly appreciated.” 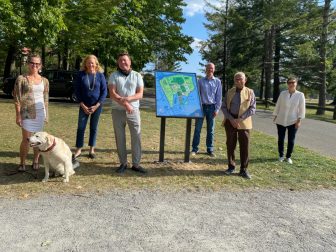 The Waveny Park Conservancy has installed two large maps of Waveny in the park. This first detailed map of the park with its trails and structures was produced with funding from the New Canaan Community Foundation. The design was made possible through the generosity of Wadia Associates.

Finally, on a personal note, here’s a big ‘Thank you’ to Lou Kozar of New Canaan Bicycles on Cherry Street for a great bike tune-up just in time for this fall weather, recommendations on safe and reliable equipment and for sticking around past closing to walk me through how to safely stow my bike in the back of the car.