A sign in the window at Organika on Main Street says the vegan and vegetarian food provider that opened two years ago is “under new ownership.” The shop is now called “greenology” and its menu appears to be the same.

Police Chief Leon Krolikowski reported during Wednesday night’s Police Commission meeting that car crashes with property damage have dropped from 336 through the first 10 months of 2019 to 195 this year, “likely due to decreased traffic with COVID,” he said. Crashes with injuries also are down from 38 to 22 year-over-year.

This Tweet from last weekend that mentions New Canaan made a big splash on Twitter, garnering 150,000 likes:

Police last week arrested a 17-year-old woman and cited her for possession of alcohol by a minor. At about 9:49 p.m. on Nov. 13, officers were dispatched to the area of Ponus Ridge and Cascade Road on a noise complaint. There, police determined that a juvenile party was underway, and issued the teen the infraction-level offense.

After town resident Tom O’Dea’s presentation for a modest transfer of funds for ice rink equipment took 21 minutes and two seconds during Tuesday’s Board of Selectmen meeting, First Selectman Kevin Moynihan said, “This may be the longest consideration of a $2,500 transfer of funds that I’ve ever participated in.” An analysis shows that if the same dollars-to-minutes ratio were applied to a Department of Public Works request made during the meeting—for $463,859.29 in parking lot work at Waveny—the discussion would have lasted 10 days, 15 hours, 14 minutes and 57 seconds.

Hearst Connecticut said that due to COVID “and the economic impact it has had across Connecticut,” it’s offering buyouts to employees, including in editorial.

Police at 4:41 Tuesday issued a $450 ticket to a motorist for passing a stopped school bus near the intersection of Frogtown Road and Weed Street.

This year’s New Canaan Ornaments will be sold at the Farmers Market from 10 a.m. to 2 p.m. Saturday. They also will be sold in the courtesy booth at Walter Stewart’s Market through Dec. 31, and by the Playhouse on Elm Street from 10 a.m. to 2 p.m. Nov. 27 and 28, and Dec. 5. Designed by New Canaan’s Faith Kerchoff, the set this year features the Irwin Park goats, “What a Year! COVID -19,” Earth Day 50/Planet New Canaan, the Karl Chevrolet Co. ca. 1927 and The Whitney Shop. 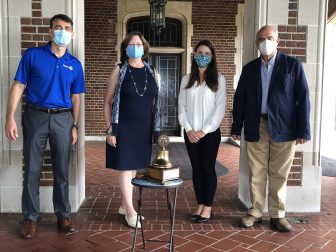 The selectmen on Tuesday voted 3-0 to hire Anna Valente-Krolikowski as part-time administrative assistant to the Department of Public Works superintendent of buildings. The New Canaan resident, former longtime owner of Baskin Robbins on Main Street, was one of more than 50 people who applied for the position. “She has volunteered for Human Services, Health, community testing, she was the Town Hall greeter and has worked for the Food Bank and EMS,” town Human Resources Director Cheryl Pickering-Jones said.

The New Canaan Building Department ton Nov. 17 issued a permit for Bankwell to do about $1.2 million of interior renovation work on its 26,760-square-foot headquarters at 258 Elm St., formerly known as the “Unimin” or “Covia” building. The project is generating nearly $17,000 in Planning & Zoning fees for the town. Here’s a podcast with Bankwell CEO Chris Gruseke from June that discusses the local bank’s plans.

Finally, the new composting drop-off area is operating at the Transfer Station. Residents can put food scraps such fruit, vegetables, meat, fish, bones, dairy, coffee grind and cut flowers in a container at home and dump it into designated bins at the Lakeview Avenue dump, or in compostable BPI-certified bags.