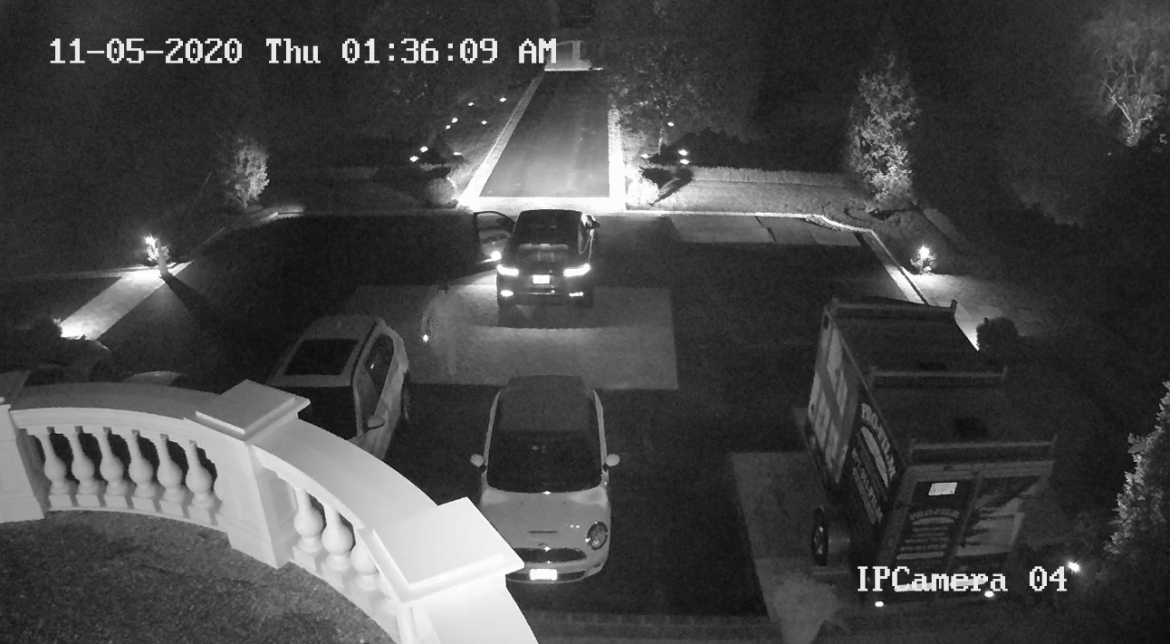 Video surveillance cameras show someone trying the doors of cars parked at a New Canaan home this month. Image courtesy of the New Canaan Police Department

Those caught after breaking into or stealing cars from New Canaan typically get off easy since their cases are classified as property rather than violent crimes, officials said this week.

“Usually they’ll get released and it’s kind of a revolving door,” Krolikowski said during a regular meeting of the Police Commission, in response to a question about the thefts. “Lots of times they get arrested multiple times. I’ve heard of cases where people have been arrested dozens of times and the people still aren’t in jail. It’s a property crime. The reality is it’s not a violent crime. Violent crimes people seem to go to jail for for some period of time. But this is a property crime and it’s an easy one because our residents are leaving their cars unlocked with keys in them, and kids are coming here and using them, more or less, for joy rides. In some instances they’re using them to commit other crimes, sometimes violent. So that’s certainly concerning. But typically they get released pretty quickly after being arrested.”

The comments came in response to a question from Commissioner Jim McLaughlin during the appointed body’s meeting, held via video conference. McLaughlin referred to an incident in July, when a resident reported suspicious activity that led to the arrests of three Stamford teens illegally entering cars on Richmond Hill Road.

Krolikowski reported that through the first 10 months of 2020, New Canaan has seen a year-over-year rise in thefts from vehicles, from 17 to 40, and an increase of stolen vehicles from nine to 23.

“That’s a substantial increase and I’m hoping that people get the message and lock their cars, remove all valuables and don’t leave the keys in their cars because it’s an epidemic of sorts in Fairfield County,” he said. “We are actually getting groups from out of state coming into New Canaan. We had a car recovered in New Jersey, which is unusual. There are three different gangs that are working in Greenwich and it seems that there are two or more working in New Canaan, because of that connection to New Jersey.”

McLaughlin asked what’s the downside to the criminals, if they’re generally not incarcerated following arrest.

Krolikowski replied, “There is none.”

When McLaughlin asked about requesting that prosecutors take a harder line, the chief said, “That message has been passed along multiple times, and I think it’s a weakness of our criminal justice system, in some respects.”

“Right now, because of COVID, court cases are overwhelmed, courts are overwhelmed because of the backlog of cases,” Krolikowski continued. “They are certainly prioritizing violent cases, which there’s certainly a fair number of those in our state. So this happens to be lower on the scale. I think if you recall several years ago, the governor made a lot of offenses juvenile, 16- and 17-year-olds. Whereas years ago, it was an adult offense, so it was a more punitive process, for lots of good reasons. But now even 16- and 17-year-olds are treated as juveniles. So typically the juvenile courts are more palliative than punishing. We’ll see juveniles arrested dozens of times before they become adults and commit more crimes and then we’ll see an arrest that will lead to some sort of intervention.”

Krolikowski reported during the meeting on a community survey from the Police Department that garnered 381 responses. McLaughlin in reviewing the results noted that respondents ranked car thefts as the number one problem here.

“You have—I think rightly—made the point that people should not leave their keys in their car,” McLaughlin said to the chief. “But I am troubled—I don’t know what we can do about it—but I’m troubled by the fact that the criminal justice system seems to regard it as not really a problem, that it’s quote-unquote, just a property crime. Well if you have your car stolen it’s a pretty big deal, and in my view it should be prosecuted. We don’t get to make prosecutorial decisions on this committee, but anything we can do to make them take it more seriously.”