The town as yet has been unable to settle a lawsuit filed last April by a firefighter claiming he suffered years of verbal abuse and harassment—including in the form of racist and homomisic remarks—from a superior in the department. The two parties entered settlement talks last summer and they’ve been prolonged. The sides last met March 5 for a telephonic settlement conference before U.S. District Court Judge Sarah A. L. Merriam. The town has spent about $800 in legal fees on the matter this fiscal year (far less than the $28,000 spent on the God’s Acre ownership dispute). 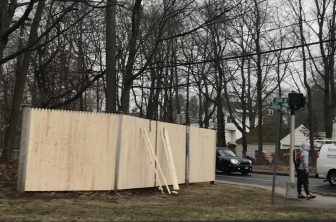 The spray-painted “4-1” has been removed from the sports wall at Farm and South. Credit: Michael Dinan

Workers on Thursday morning could be seen cleaning off the “sports wall” at South Avenue and Farm Road. It had been vandalized with “4-1” spray painted multiple times in blue overnight from Saturday to Sunday, following a Darien ice hockey win over New Canaan by that score. Police are investigating.

Upcoming events to mark in your calendar:

Stolen vehicles in New Canaan are up through the first two months of the year at six compared to zero from the same time period one year ago, Police Chief Leon Krolikowski said Wednesday. In addition, larcenies from vehicles are up from seven to 10 in the same timeframe, the chief said during a regular meeting of the Police Commission.

Updated data from the state Department of Public Health shows that New Canaan’s average daily rate of COVID-19 per 100,000 people stands at 23.7 for the most recent period, compared to 22 for Darien.

Members of the Town Council following a budget presentation Tuesday night by the Board of Education praised the elected body, Superintendent of Schools Dr. Bryan Luizzi and district administrators and staff for their handling of the public school system throughout the COVID-19 pandemic. Councilman Steve Karl said, “I deal with a lot of folks from different towns and collectively I’ve heard from the past year, ‘I don’t know how your school system does this but my town isn’t doing what your town is doing and we’re so jealous.’ Kids that are not in school. Parents that are pulling their hair out. And I can’t tell you how many times I’ve heard that over the past year and how proud I am and everyone in New Canaan is about how great you guys have handled it. Bryan, you deserve a lot of credit. I think you’re emulated throughout the state, so well done. Hat’s off to New Canaan.” Councilman Sven Englund said, “I work in Danbury and all hear from all the people who live in the cubes around me is we don’t understand why we can’t do the same thing in our school system that you guys are doing down there. So thanks again, folks. Really, really appreciate it.”

Officials say there’s no water at the Animal Control shelter in the town dump due to a broken pipe. According to Public Works Director Tiger Mann, a ca.1970s 8-inch main broke underneath the incinerator floor behind the Highway Garage wall at the Lakeview Avenue facility. “It’s five feet down underneath concrete,” Mann said during Wednesday’s Police Commission meeting. “it’s in a really, really bad spot for us to get to. So all we could do at present was close it off. And unfortunately, we learned that that’s the way the Animal Control shelter was fed. We thought it was originally fed through the Highway Department. It’s not. So she [Animal Control Officer Allyson Halm] got shut down as well. We can bring in potable water for her to work but the water service is off at present.” An engineer is looking at a repair that “is going to be quite costly,” Mann said. He added, “We don’t have a path forward yet. We are in the tens of thousands of dollars of repair.”

Parks & Recreation Commission Chair Rona Siegel during her update to the appointed body at its regular meeting last Wednesday said she wanted to share “some happy news in this kind of environment.” Siegel continued, “One of our town employees, [Assistant Park Superintendent] Todd Deklyn, and his wife Kimberleigh had a baby girl on Tuesday. So I just want to welcome Leighton and hope they are both doing well and baby Layton, their little girl is doing well. That’s great news. It’s always nice to see weddings, babies, puppies, all this good stuff at times like this. Any time, for that matter.” Leighton Reese Deklyn was born at 8:31 a.m. on Tuesday, March 9.

The Exchange Club of New Canaan is accepting qualified grant applications through April 30, according to Jim Murray, chairman of the club’s Grants and Donations Committee. Through fundraising events including the annual Christmas tree sale at Kiwanis Park, annual golf outing, and social events, the Exchange Club has granted more than $1 million to local charities in the past 10 years. More than 30 nonprofit organizations such as Help for Kids, ABC of New Canaan, GetAbout and the New Canaan Land Trust have received grants in recent years.

The New Canaan High School Theatre Department’s presentation of Rodgers & Hammerstein’s “Oklahoma!” opened Thursday with a live online screening, and tickets are available to watch the performance streamed on a phone, tablet, laptop or smart TV at 7 p.m. on Friday and Saturday. Tickets can be purchased here. Here’s a podcast with director Kate Simone, a 2005 New Canaan High School graduate.

Congratulations to Megan Ferrell, who had her fine art photography spotlighted recently on an Italian art site. Ferrell, a Wilton resident, is creative director of communications at St. Mark’s Episcopal Church.

Finally, the New Canaan Society for the Arts has established a new scholarship award to support the educational costs of a Fairfield County high school student who plans to major in art at an accredited college or university. The 2021 Carriage Barn Arts Center Scholarship has been established in honor of Dan Bergfeld, a past board member, sculptor and lifelong supporter of the arts who passed away in 2020. Qualified students may apply by May 1 at carriagebarn.org and the committee will announce the recipient on or about June 1.