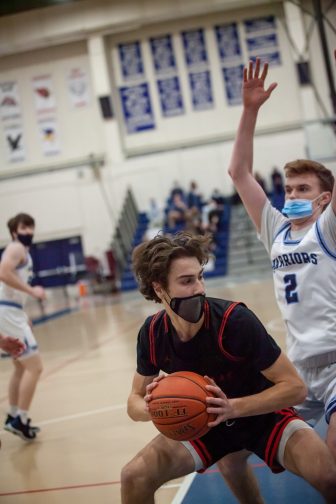 Most basketball fans know the name and the moment associated with it. In Game 7 of the 1970 NBA Championship, the injured New York Knicks captain—barely able to walk and not expected to play with a torn thigh muscle—shocked the Los Angeles Lakers and when he emerged for pregame warmups. Reed then electrified the Madison Square Garden crowd and his teammates by sinking his first two shots of the game. The Knicks went on to win the game and the championship.

After missing four games due to a concussion, the New Canaan senior co-captain returned to the Rams’ starting lineup and instantly injected a dose of energy into his teammates. Magnus scored New Canaan’s first four points of the game, nine in the first quarter and a team-high 20 on the night to lead the Rams over the Wilton Warriors at the Zeoli Field House 57-48. 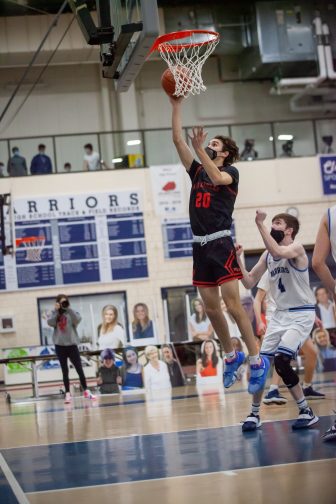 “People have been talking all season long about how Leo is an all-FCIAC player,” New Canaan head coach Danny Melzer said. “If you saw what he did tonight, there is no doubt. He had a big time performance and was huge for us.”

“It was really tough being on the sidelines these past four games,” Magnus told NewCanaanite.com. “I just wanted to come in today and provide something—a spark—and my teammates fed off of that and were great. They found me in open spots and I was fortunate to be able to knock down some shots early and we got going.”

The third time was certainly the charm for the No. 5 Rams, who had lost to this same No. 4 Wilton team twice this season—including a blowout 60-35 loss on the same court less than a week ago. 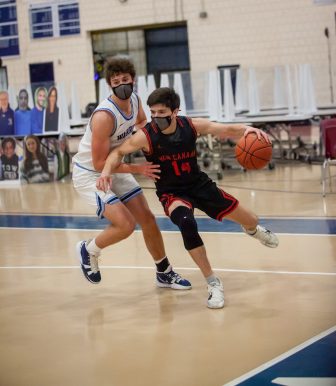 “We came in with a chip on our shoulders,” senior co-captain Will Bozzella (2 points, 3 rebounds) said. “We told ourselves that we are not going out like this. Our defense played great, we fought like dogs and Leo—he’s just a competitor personified.”

Melzer said, “When you lost twice to the same team, once at home and once here where we got our butts kicked, I don’t think our kids are too happy about that. I felt like we got punked the first two times we played them. We were not going to get punked tonight. We played with pride tonight. Offensively we were sloppy at times. But we got a lot of good looks and had a lot of layups which is what we were looking for. Defensively we made them work as hard as possible and I thought we did a great job of executing our game plan.”

After falling behind 9-8 with 1:35 left in the opening quarter, Magnus scored on an up-and-under that put New Canaan up 10-9. On Wilton’s ensuing possession, Magnus stripped Josh White of the ball and found senior Steven Panzano (5 points, 3 rebounds) in the corner for a three and a 13-9 lead. 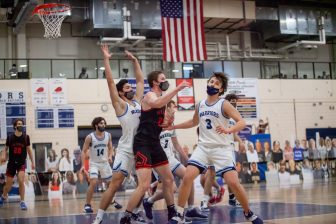 The Rams went up by as much as eight in the early moments of the second quarter before Wilton cut the Rams lead down to five. Baskets from senior Denis Mulcahy (4 points, 3 rebounds) and sophomore Blake Wilson (11 points, 6 rebounds) put New Canaan back up by nine.

Following a three from the Warriors’ Kevin Hyzy, Wilson hit a pullup jumper and Magnus sank both ends of a one-and-one that gave New Canaan its biggest lead to that point, 26-16 with 3:25 left in the half. A Wilson bank shot and a three from sophomore Jack Hladick countered five points from the Warriors and the teams went into the half with New Canaan up 31-21. 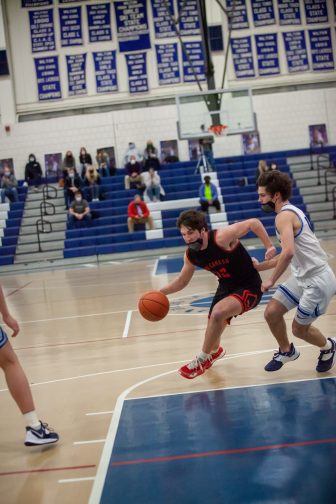 The third quarter saw Christian Sweeney (12 points, 5 rebounds) get into the action. The New Canaan senior co-captain scored eight of New Canaan’s 12 points in the period and helped the Rams maintain their double-digit lead, 43-33 heading into the final stanza.

Wilton made a run in the fourth. The Warriors outscored New Canaan 9-2 over the first three minutes of the quarter to pull within a single possession. With 5:04 left in the game and momentum swinging Wilton’s way, Sweeney calmly buried a corner three, putting the Rams back up 48-42. After a Wilton miss Magnus hit a streaking Panzano for a fast-break layup, extending the New Canaan lead to 50-42 with 3:34 remaining.

The two teams traded steal-and-score possessions and from there the game turned into a free-throw contest. The Rams responded, hitting five of six from the line down the stretch to earn the win and advance to the FCIAC Semifinals where they will play Ridgefield on Tuesday. 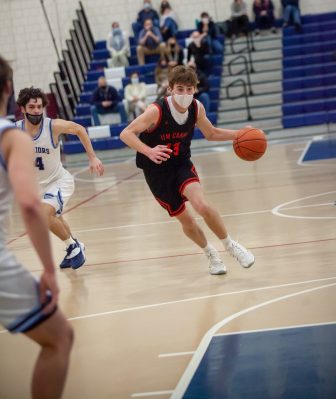 The top-seeded Tigers defeated Darien in their quarterfinal matchup. New Canaan took the first meeting between the two teams earlier this month in a double-overtime thriller, 64-59.

“I’m really proud of what we accomplished tonight,” Melzer said. “It’s the playoffs and nothing is going to come easy. We’re not going up ten and watch them lay down and die. We took their best punch and responded. That’s what good teams do and hopefully that is a sign of a championship team. As we have all season, we are going to enjoy this win and get back to work.”