Two days, two wins over previously-undefeated teams. It’s been quite a week so far for the New Canaan Rams boys basketball team. 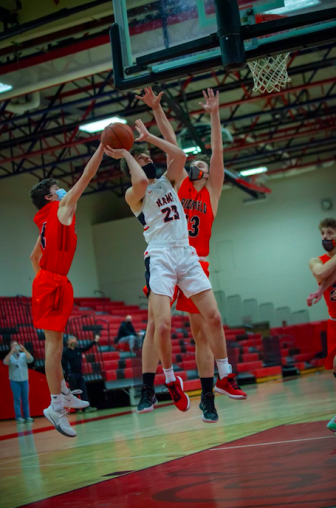 Twenty-four hours after handing Staples its first loss of the year, the Rams took down Ridgefield 64-59 in a tense, exciting game in double-overtime Wednesday night at New Canaan High School.

“Both teams threw punches and both teams answered punches,” New Canaan head coach Danny Melzer said. “It was fun to be a part of and obviously more fun being on the winning end. It was a well-played game and I’m proud of everything we did tonight to earn the victory.”

As they have been all season the Rams were gritty, patient and resilient, never panicking nor letting the game get too far out of reach. After trailing Ridgefield by seven after one quarter and by nine at the half, the Rams clawed back into the game in the third quarter. New Canaan outscored the Tigers 20-11 to draw a 40-40 tie heading into the fourth. 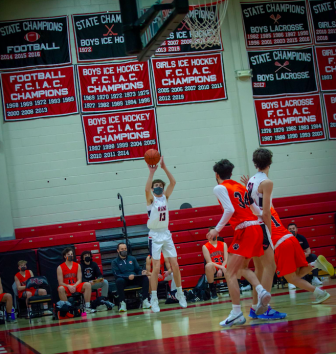 After scoring the first six points of the fourth, Ridgefield looked as though they would pull away. New Canaan fought back to get to within three points. Down 51-48, sophomore Blake Wilson hit the shot of the night, draining a corner three to tie the game with just 38 seconds left in regulation.

“Blake is tough, he’s so coachable and extremely competitive,” Melzer said. “I don’t think he came out the game once for us. For a sophomore to do that against a team like Ridgefield says a lot about who he is as a basketball player and who he is going to become.”

“His shot was great but I thought Blake’s most impressive play was when he stole the ball in overtime,” senior co-captain Will Bozzella told NewCanaanite.com. “They got a little lazy with a pass, he dove right on it and called timeout. He brings that intensity to practice every day. You can’t teach that.” 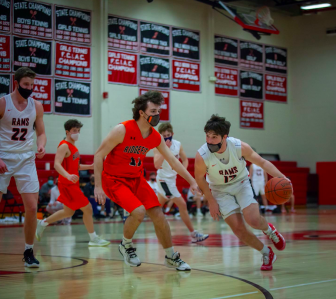 The Rams pulled off a huge defensive stand with the game tied in the final seconds the fourth quarter to force overtime and did the same in the first extra session to extend the game to a second OT. In that sixth period, New Canaan held Ridgefield to a single field goal and iced it when – with the Rams up by three – senior co-captain Christian Sweeney stole a pass, got fouled and drained both free throws to put the game out of reach.

For the second straight night senior Denis Mulcahy led New Canaan in scoring, netting 16 points. Wilson and senior co-captain Leo Magnus scored 14 apiece and senior co-captain Christian Sweeney added 12 for the Rams, who improved to 7-1 on the season. Ridgefield—which lost for the first time since January 21, 2020—dropped to 7-1. 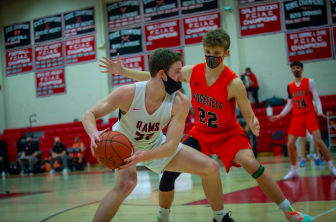 New Canaan grabbed an 8-7 lead midway through the first quarter after a Wilson steal led to a Magnus layup. Ridgefield ended the first on a 10-2 run as 6’5” freshman Dylan Veillette scored seven of his 18 points on the night to help the Tigers to a 17-10 lead after one.

The teams stayed close throughout most of the second quarter. Bozzella landed in some foul trouble, had to sit and the Tigers took advantage. Ridgefield outscored New Canaan 7-0 over the final three minutes to head into the intermission up 29-20.

“At halftime I told them that we were playing well and that Ridgefield was just playing a little bit better,” Melzer said. “They’re a good team and we have to play really well to beat them. So we came out in the second half understanding that and made a few minor adjustments, less so for the coaching staff and more so for the players. They decided that we needed to get some stops, drive to basket, stay on their feet, kick to open shooters and they did that.”

New Canaan opened the second half with a 16-6 run to take its first lead since the first quarter, 36-35, on a Bozzella three-pointer. Ridgefield took the lead back immediately on an Emmett O’Malley three, but baskets from Magnus and Wilson sandwiched around a pair of Ridgefield foul shots by Matthew Eiben sent the game to the fourth tied at 40.

After Wilson’s game-tying three forced the first overtime, Ridgefield was once again positioned to win the game, going up 55-53 with a little more than a minute to play. Wilson dove on a loose ball to thwart a potential game-changing possession by Ridgefield and Magnus sank a pair of clutch foul shots with :56 seconds left, knotting the game up once again and forcing a second overtime.

After Mulcahy put back his own miss to give New Canaan a 57-55 lead, the Rams never trailed again. New Canaan converted seven of its final 10 free throws and clamped down on defense, forcing Ridgefield to long-range shots and cleaned up the defensive boards down the homestretch.

“The speech I gave after the Staples game was the same speech I gave tonight,” Melzer said. “Let’s enjoy this victory, we just beat a very good team. But we haven’t accomplished anything yet. We are playing for seeding—our goals are for when playoff time comes. If we win games we are going to enjoy it and get right back to work the next day.”