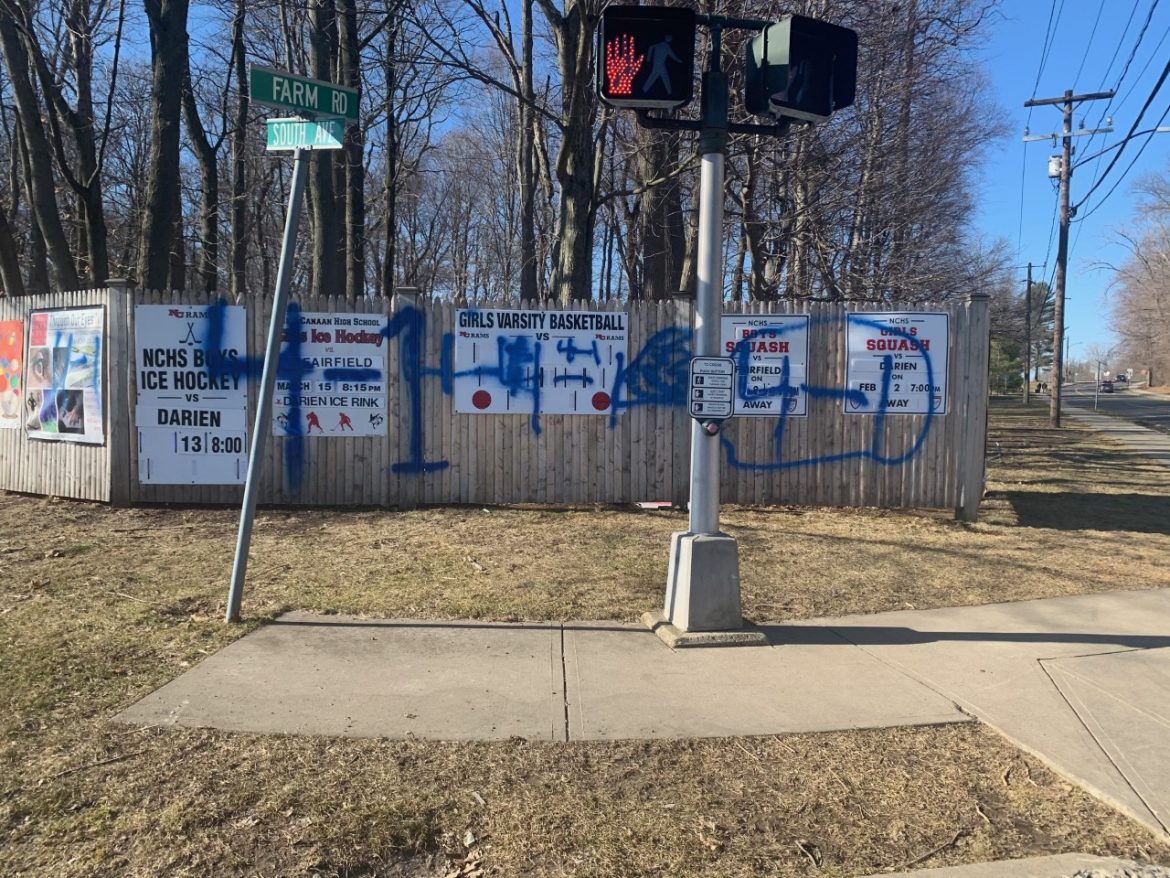 The vandalized fence at Farm Road and South Avenue, on March 14, 2021. Photo published with permission of its owner

Police say they’re investigating a report of vandalism of the fence at South Avenue and Farm Road that promotes New Canaan High School sports contests and other community events.

Spray-painted multiple times in blue at the conspicuous corner, the “4-1” that greeted passersby Sunday morning might refer to the final score of Saturday’s Darien varsity boys ice hockey team win over NCHS.

New Canaan Police Lt. Jason Ferraro, the department’s public information officer, confirmed when asked by NewCanaanite.com about the matter that authorities received a complaint of vandalism and are investigating.

One year ago, a similar message was spray-painted on Darien High School’s sign after the Rams defeated the Blue Wave in the same rivalry.

Darien boys ice hockey leads Division I of the FCIAC this year with a 5-1-2 record. New Canaan is 4-4. Both teams are expected to make the playoffs, which will start next week.

The Darien-New Canaan sports rivalry has yielded vandalism in the past. One decade ago, five Darien football players were banned from playing in the Turkey Bowl or playoffs after officials said they spray-painted the exteriors of NCHS and Dunning Field on the eve of the big game. In 2017, two Darien football players didn’t play in the Turkey Bowl after they were arrested following the assault of a juvenile in New Canaan.

In 2015, a sign posted to the fence at Farm and South called for the ousting of a New Canaan Youth Football coach, prompting an investigation.

In an email to parents Sunday, NCHS Principal Egan said, “I was disappointed to see that our athletics board on Farm Road was vandalized following the hockey game against Darien. This behavior is unacceptable. We have reported it to the police and are investigating the incident. Please make sure that we maintain our dignity and do not retaliate. This is significant damage and it is not ok. I urge you to continue to make good decisions and do not respond. We have a special school community and I urge you to not react to juvenile vandalism.”