New Canaan Youth Football leaders say they’re investigating the public posting of a sign that appears to call for the ousting of one of its coaches. 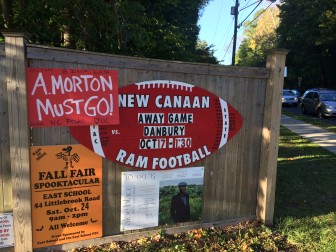 The community message board at South Avenue and Farm Road on the morning of Oct. 12, 2015. Credit: Michael Dinan

The largest letters on the sign, which appeared Monday morning, seem to identify a coach on an 8th-grade team, saying that individual “must go.”

The league has contacted both New Canaan High School’s athletic director, who helps oversee the public posting area at South and Farm, as well as the New Canaan Police Department “to assist us,” Cunney said.

“When we find out who it is, we will pursue as much sanction in our Parents Code of Conduct as we can,” she said.

Signed by parents with kids in the popular youth football program, part of that Code reads: “I have an obligation to address any concerns that I may have at the time they occur with the Head Coach, member organization’s President or FCFL President.”

Another part reads: “I will encourage good sportsmanship by demonstrating positive support for all players, coaches and officials.”

Cunney said league leadership is “disappointed” about the sign. “This is certainly not what our program and not what our community is about,” she said.

NCHS Athletic Director Jay Egan said people are asked to use either end of the fence at South and Farm for community announcements and that the two middle sections are used for athletics. Though an unauthorized commercial sign occasionally appears, nothing negative has been posted there before, Egan said.

Reached by NewCanaanite.com, the coach whose name appeared in the sign declined to comment, referring questions to Cunney.

It appeared at South and Farm as NCYF addresses a separate matter related to the same 8th-grade team (itself identified in smaller letters on the sign): A grievance has been filed against its coaching staff, Cunney confirmed.

Multiple parents of the team interviewed by NewCanaanite.com said complaints related to the coach in question deal with overly aggressive berating of the kids, personal attacks directed toward the youth and inappropriately phrased comments about their play.

Such grievances from parents about coaches are neither uncommon nor unique to football among youth sports in town, according to Chris Robustelli, chairman of the Youth Sports Committee, a town-appointed body which oversees the local, volunteer-run organizations.

Asked to speak generally about the frequency of grievances within youth sports, Robustelli said: “There are issues in every sport in town. This is not the first and will not be the last. If it warrants attention, it is addressed.”

In a season that has seen at least one key player lost to injury, this particular team has enjoyed little success, parents told NewCanaanite.com.

Last year, when the boys were in the 7th grade and lost a game, the players brought home a document—clearly drawn from quarterback Tim Tebow’s famous “Promise” speech as a collegiate athlete—to parents to sign, that apologized for losing. “We wanted an undefeated season,” part of that document read. “That was our goal, something NC Black has never done here.”

The team has two games remaining this season, at Weston and home versus Wilton, according to a schedule posted online.

Clearly outlined on NCYF’s website, the process has a Grievance Committee interview parties involved to try to resolve the matter, which may then be referred to league’s board.

“If referred to the Board of Directors, the grievance will be addressed as swiftly as possible and may result in suspension of coaching privileges for some length of time or permanently,” part of the NCYF Grievance Procedure reads.