New Canaan Police at 7:16 p.m. Tuesday responded to a neighbor dispute on Church Street regarding the speed of a vehicle in a shared driveway. Police have been involved in disputes between the owners of 15 and 23 Church St. going back to at least last fall.

The town was on track Thursday to surpass 10,000 doses of COVID-19 vaccine administered at its clinics, New Canaan Health Director Jenn Eielson told members of the Health & Human Services Commission during their regular meeting. Asked by Commissioner Tom Ferguson what is the trend line at this point of people coming in for first doses of the vaccine, Eielson said it’s “almost non-existent.” 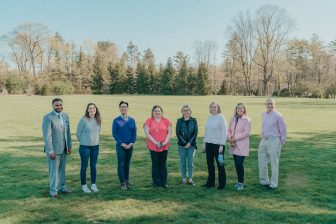 The New Canaan Chamber of Commerce has added10 new members to its Board of Directors:

Laura Budd, executive director of the Chamber said in a press release that the new group represents “successful local businesses” that “understand what it takes to work hard during difficult times. “

“We’ve had to get creative and our board members have done a great job of collaborating and together, we look forward to participating in chamber events such as the Sidewalk Sales, Holiday Stroll and Taste of the Town,” Budd said.

The Board of Selectmen on Tuesday voted 3-0 to appoint New Canaan Chief Building Official Brian Platz to a four-year term expiring April 30, 2025.

Police at 6:14 p.m. Monday responded to a report of vandalism at the newly restored Bristow Bird Sanctuary and Wildwood Preserve. The front legs of a bench there had been broken off, police said.

The chair of the Health & Human Services Commission said during Thursday’s meeting that the town’s annual Memorial Day Parade would be back on this year. The town has issued no notifications to local press regarding the parade, which traditionally is held on Memorial Day itself (Monday, May 31 this year). There also is no update on the municipal website regarding the parade. Dr. Harrison Pierce, the chair, said the route this year would be a little different—likely given roadworks—starting on Oenoke Ridge and then going to South Avenue and coming down Harrison Avenue to Lakeview Cemetery, where a ceremony is held.

There also have been no announcements from either the Republican or Democratic Town Committee regarding who will run this year for New Canaan’s top elected offices. In the municipal election season two years ago, First Selectman Kevin Moynihan and Selectman Nick Williams announced in April that they were seeking re-election.

The selectmen this week approved the promotion of firefighter Kevin Vetti to the rank of lieutenant in the New Canaan Fire Department.

Police at 1:10 p.m. Tuesday cited a motorist for passing a stopped school bus in the vicinity of 545 Smith Ridge Road.

Police responded at 6:01 a.m. Tuesday to a report of vandalism at Canaan Parish housing complex on Lakeview Avenue. A car window was broken.

The selectmen during their meeting voted 3-0 to remove Tucker Murphy, administrative officer for Moynihan, from probationary status.

Some upcoming events worth booking:

Prosecutors on Thursday announced that a federal court sentenced a 51-year-old Ridgefield man who held ownership interests in pizza restaurants—including Pinocchio Pizza on Main Street in New Canaan—to 30 days in prison for a federal tax offense.

Finally, LiveGirl is hosting its 4th Annual She is Rising Art Exhibit and Celebration in partnership with New Canaan’s Carriage Barn Arts Center from May 27 to June 5 along with an in-person outdoor Art Celebration benefit at the Carriage Barn from 5 to 7 p.m. on June. This year’s curated exhibit, “She Is Rising,” is a celebration of women of various ages, backgrounds, and ethnicities—some captured from life, and others imagined—who represent female power in myriad manifestations.