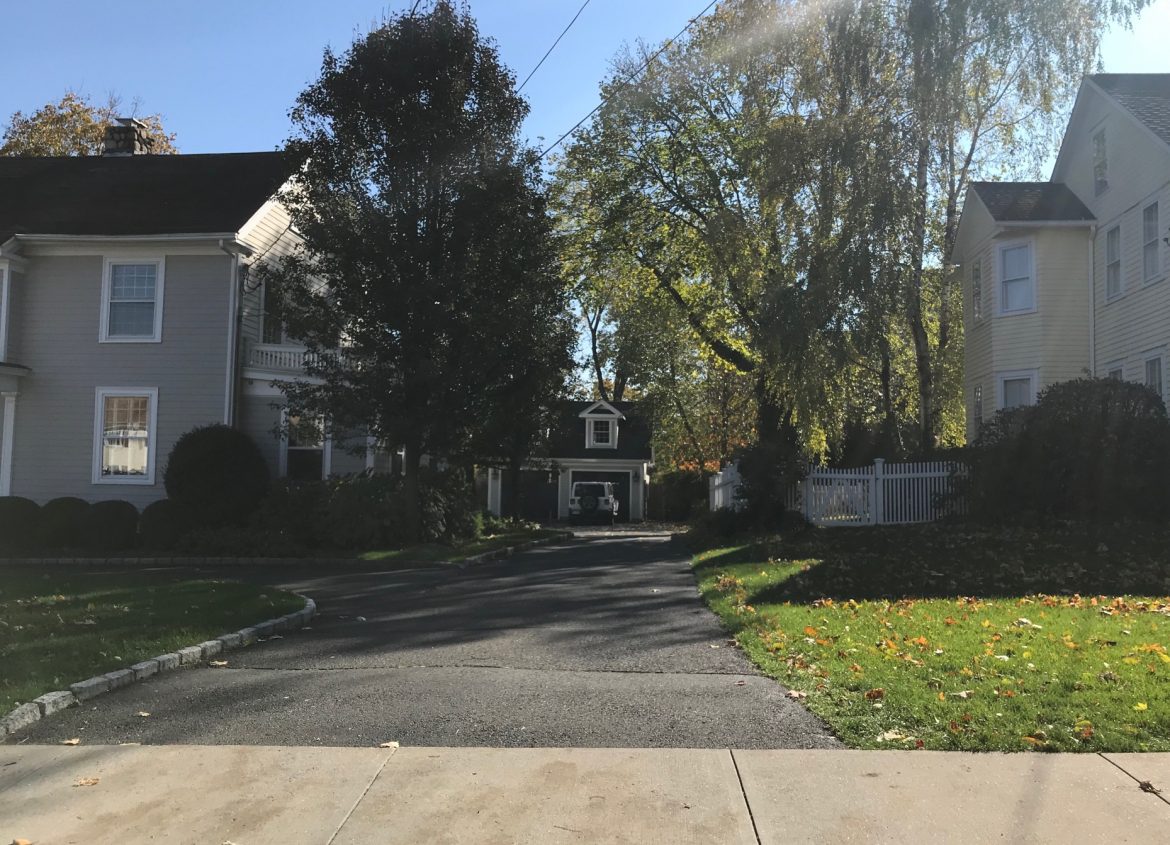 The driveway shared between 15 and 23 Church St. Credit: Michael Dinan

The owners of a Church Street home last month called on police to intervene in an escalating dispute with a neighbor involving use of a common driveway, according to a New Canaan Police Department incident report.

Though Laura and Paul McGeary of 15 Church St. have an easement agreement to use part of a driveway shared with their next-door neighbors, they’ve crossed over the physical property line in order to turn their vehicles around, the couple told New Canaan Police Officer Giancarlo Vincenzi, according to an incident report obtained by NewCanaanite.com through a public records request.

The neighbors, Carlene and Andrew Towers of 23 Church St., “have been taking issue” with the practice, the McGearys told Vincenzi in filing a complaint at police headquarters on the afternoon of Sunday, Oct. 18.

“They stated that Carlene began placing cones on the part of the driveway that the McGearys use to maneuver their vehicle, making it difficult to turn the vehicles around and leave the driveway,” the incident report said.

“They stated that Carlene then escalated to placing a large lacrosse net on the part of the driveway that they use to maneuver the vehicles. The McGearys stated that they have historically just moved the objects out of the way so that they can pass through the driveway.”

Yet more recently, the McGearys said, “Carlene has been confronting them and has made several comments to them regarding the driveway situation.”

The day before the McGearys brought the matter to the attention of the police, “they found a wooden board, with several nails sticking out of it in the area where they maneuver their vehicles,” the incident report said.

“The McGearys are now concerned that the situation might escalate going forward,” it continued. “They stated that they have sent a certified letter to the Towers, asking them nicely to remove the intentional obstructions and allow them to use the small area of the driveway to turn their vehicles.”

At about 12:30 p.m. the following day, Monday Oct. 19, Vincenzi spoke to the Towers at their home. They told the officer that Paul McGeary “drives extremely fast in the driveway and they are afraid that their children, or their dog will be struck,” the incident report said.

The Towers also showed Vincenzi that the McGearys are crossing the property line in using the driveway.

“The Towers stated that they do not wish to have any further issues and that all they ask for is for the McGearys to slow down when pulling into the driveway, and for them use only the space allocated to them indicate on the property line map,” the incident report said.

About an hour later, Vincenzi said in the incident report, he phoned Laura McGeary and relayed that the Towers “wished to have them stay on their portion of the driveway and to slow down when pulling into the driveway.”

“She [Laura McGeary] stated that she understood,” it said.

The McGearys bought their house in May 2014, tax records show, the Towers five months later.