As new residents flock to New Canaan at a blistering pace and set exciting new real estate sales records, there are some pressing matters in the animal control department that newcomers and former city-folk need to get up to speed on.

First, it should be obvious to new residents that there are many animals lurking about town. Since New Canaan is nestled in a heavily forested area, one should take proper precautions and remain aware, especially with small pets, or for people (like me) who have a propensity to attract wildlife. It’s a good reminder to be alert, as I have become increasingly too relaxed and tend to pooh-pooh those all too frequent neighborhood updates about roaming foxes, coyotes and the occasional escaped peacock.

As a magnet for the absurd, I would even go so far as to recommend that anyone sporting a bushy ponytail should be aware of the slight risk that a hawk could mistake it for a squirrel riding atop your head. Believe me, if anyone’s ponytail is going to get dive-bombed by an angry winged creature, it’s probably me. 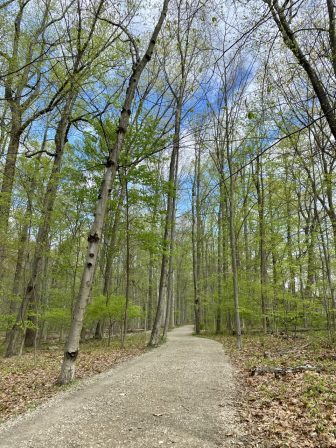 With my twisted history encountering wild animals, I should be at a heightened state at all times. It would seem that I tend to lure them in with my special brand of “Cougar” pheromones. Over the past two years, while hiking in Wyoming, I have been caught between a mama bear and her cub, surprised by a huge raging moose, and stalked by a deranged coyote. Luckily, I was with experienced hikers, who coached me through each ordeal, while enduring some of the worst cursing in the history of English.

Yet New Canaan is not the backcountry, and I have been guilty of letting my guard down. A few weekends ago, while jogging in Waveny during peak hours, a rather large bobcat jumped out of the woods and stood its ground in front of me. It was good to know that my scent still attracts some of the wildest of animals on the East Coast too. We both came to a screeching halt and froze. I have engaged in many a staring contest with my children, but this one was next level. The bobcat did not flinch, nor did it seem at all scared by my presence. However, I can confirm that I was one hundred percent uncomfortable…and alone with a small tiger.

Tapping into the survival skills that I reluctantly gained in Wyoming, I made myself look large, which thanks to Covid weight-flux issues, wasn’t too hard to pull off. Then, I began to yell at the bobcat and wildly flail my arms like one of those blow-up creatures that sits outside of car washes. The “scary” voice that nervously escaped my body was the one I use to tell my kids to clean their rooms. Apparently, my stern tone is totally ineffective in children, but works wonders with large felines. I mom-yelled the creature back to its den (which is probably neater than my kids’ rooms) and I carefully eased my way from the scene.

Running into a bobcat and having to scare it away was not what I bargained for a casual Saturday jaunt. I am beyond relieved that I did not have to engage in hand-to-paw combat and battle it out in the woods. When I shared my frightful experience with friends and family, the overwhelming response was: “That could only happen to you.” Maybe so, but it’s a good reminder that a bear, bobcat, fox or coyote could cross your path when you least expect it. Even if you’re a known animal magnet. 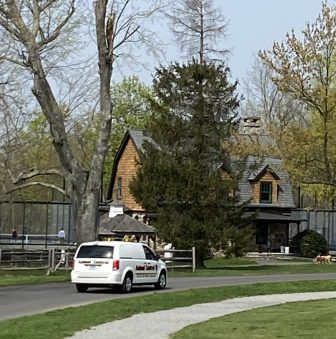 Days after my encounter, I bumped into New Canaan Police Animal Control Officer Allyson Halm, who was on the beat in Waveny. I gave her the details of my run-in, so she could make note of it and keep tabs on potential den locations in the area. While we were chatting and exchanging tales of the woods, her radio went off and she was called into action. Apparently, there had been a sighting of New Canaan’s notorious peacock escapee and Officer Halm had to go in hot pursuit.

It made me wonder what this officer has seen in her career and what truly lurks in the woods. And then all of the sudden, running into a bobcat didn’t seem nearly as bad as trying to track, capture and subdue a randy exotic bird.

My hat’s off to you, Officer Halm. I’m sure you’ve seen it all.

6 thoughts on “Full Disclosure: What Lurks in the Woods”