After months of negotiations, the lawsuit brought against the town last year by a New Canaan firefighter finally has been settled, the firefighter’s lawyer said.

Town Clerk Claudia Weber on Thursday afternoon received the head moderator’s final report on the results of Wednesday’s referendum vote regarding the Board of Education’s budget. A total of 1,914 electors voted—808 in favor and 1,106 against, so the referendum failed. For it to succeed, Weber said, 15% of the electorate at the latest registry, or 2,046 voters, would have had to vote “Yes,” and the majority of voters would’ve needed to vote “Yes.” 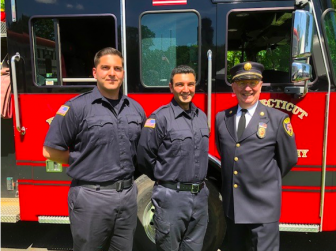 The New Canaan Mounted Troop’s “Kick Up Your Hooves” event—“fun and games with horses by day, dance outside by night”—is to be held Sunday. Details here.

Health Director Jenn Eielson said Thursday that as of May 26, 90% of New Canaanites aged 15 to 44 have received at least one dose of COVID-19 vaccine—the second-highest rate in the state and the highest in Fairfield County. Regarding teenagers, she told members of the Health & Human Services Commission at their regular meeting, “These kids are tired of quarantining. They don’t want to miss school. They don’t want to miss sports. That group was the easiest to get vaccinated.” In all, 12,242 had been administered as of Thursday morning, Eielson said. As of May 26, 84% of those aged 45 to 64 had received at least one shot, 99% of those 65-and-over, she said.

1980 New Canaan High School graduate Bobby Troup through his company, Embrace Life, has created what he’s calling a “COVID-19 vaccinated bracelet.” “It’s a product that offers a solution to the confusion around how to interact with others in the age of COVID,” he told NewCanaanite.com. “It’s a statement of asserting one’s pride regarding getting vaccinated.” A percentage of sales is going to nonprofit organizations assisting those affected by the virus. The 100% recycled silicone rubber, U.S.-made bracelets may be purchased here through Etsy.

The New Canaan Y is launching a 5’s pre-K program this fall.

The New Canaan Building Department on May 27 issued an after-the-fact permit for about $117,000 of work done at 414 Hoyt Farm Road. An 1,800-square-foot basement had been finished with two bedrooms, a media room, full bath and storage closets, the permit said. “Kindly note that all the above work works done without obtaining the necessary permits. This means that all required inspections during construction were not performed.” The town collected $1,795 in fees for the work.

A tenant of 310 Old Norwalk Road failed to pay $6,300 monthly rent starting last October, a few months after signing a lease and moving in, according to an eviction complaint filed May 20 in state Superior Court.

Waveny LifeCare Network from 10 a.m. to 2 p.m. on Friday, June 18 will host an in-person, drive through “CarFit” event at The Inn (73 Oenoke Ridge). Sign up for an inspection of your vehicle by trained CarFit professionals who will take registrants through the 12-point checklist, recommending minor adjustments that help make cars “fit” better for optimal comfort and safety. Appointments are required, please email events@Waveny.org. More info here.

Bankwell is relocating its Elm Street branch services to the bank’s flagship location at 156 Cherry St.

From 9 a.m. to 1 p.m. Saturday at the Noroton Heights Train Station, the town of Darien will hold a Household Hazardous Waste Day. There, people can bring household (not commercial) hazardous waste in original sealed containers with a screw cap, if possible, such as weed killers, paint thinner, kerosene, furniture polish and drain cleaners. 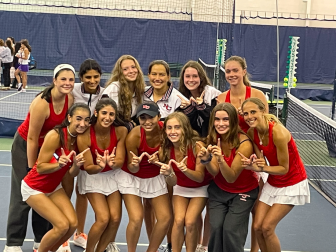 Finally, we received the following submission about NCHS girls tennis from Lisa Platt: “The NCHS girls tennis team is having a terrific season under the direction of Catherine Walker, who is in her third season as coach. New Canaan had an amazing 13-2 record in regular season play, earned a #3 seed in the FCIAC tournament, and is a great mix of veterans and newcomers. The team is led by senior co-captains Jordyn Lee, who plays #1 doubles with sophomore Annabel Brawn, and Charlotte Sigg, who plays #2 doubles with senior Natalie Thompson. The top 4 singles players are relatively young with sophomore Lexi McCall playing #1, senior Valentina Zamora at #2, sophomore Serena Platt at #3 and freshman Layla Zuwiyya at #4. The team is rounded out by the #3 doubles team of junior Julia Gjertsen and sophomore Sophia Doshi. In the FCIAC tournament, after beating Danbury easily 7-0 in the play-in round, the girls faced #6 seed Greenwich, who they had edged out 4-3 in their regular season contest. This time, the girls were more than ready and took down Greenwich 6-1.  In the finals. Several players have been recognized for their FCIAC performances, with McCall named All FCIAC Singles, Lee/Brawn named All FCIAC Doubles, Zamora named All East Singles, Sigg/Thompson named All East Doubles and Platt received a Singles Honorable Mention. Given their strong FCIAC showing, the girls earned the #6 seed in the CIAC tournament.  The first round pitted New Canaan against #11 seed Westhill.  During the regular season, New Canaan beat Westhill 4-3 in the closest match of the season.  The CIAC match started Friday afternoon but rain interrupted play so it was finished Saturday indoors. With several of the matches going to three sets, it was tight, but New Canaan prevailed 5-2.  The girls will play #3 seed Farmington in the CIAC quarterfinals.”