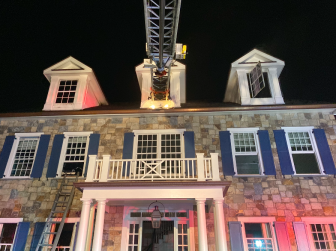 The New Canaan Fire Department at 1:24 a.m. Thursday responded to a report of a structure fire on Devonwood Lane. The third floor of the home at 99 Devonwood Lane sustained “extensive damage to the third floor,” Fire Marshal Paul Payne said. According to tax records, the house was built in 2018. No one was injured in the fire, Payne said. Mutual aid was provided by Stamford, Norwalk, Wilton and Westchester County units. The cause of the fire is still under investigation. According to a fire dispatch notice, the emergency radio system was down at the time of the two-alarm fire.

Parking Commission Chair Keith Richey inadvertently shut down the appointed body’s regular meeting Thursday when he disconnected from Zoom in order to switch computers. Richey was late to the meeting to start, saying he had a new computer and that was the problem. Once he joined, the Town Council hopeful then was appointed co-host, had trouble pulling up the agenda, shut down Zoom for himself and all attendees and rejoined several minutes later under the name “Pete Stair.” The 7:30 p.m. meeting didn’t start until 7:48.

Moynihan said during Tuesday’s regular meeting of the Board of Selectmen that New Canaan has “had a handful of COVID positive cases” in the prior week, totaling four or five. He noted that “people are concerned about this new variant.”

The United Methodist Church of New Canaan is welcoming its new pastor, the Rev. Matt Curry, during a service to be held starting at 10 a.m. Sunday.

The New Canaan Building Department on June 25 issued an after-the-fact permit for about $15,000 of work done at 111 Little Brook Road. Work done included a finished basement  utilities room, exercise room, bedroom, bathroom, wine cellar and utility area. “All the above work was done without obtaining the necessary permits,” the permit said. “This means that all required inspections during construction were not performed.”

A new shop, The Marvelous Marylyn Malkin, has appeared at 139 Elm St.

The town on Tuesday issued a permit to demolish the 1953-built ranch-style home at 319 West Hills Road. The 2.02-acre property is in the two-acre zone. 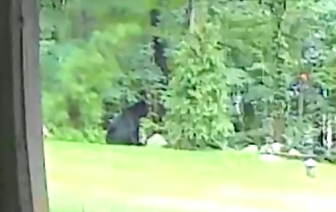 Black bear captured by a videocamera on Fitch Lane on July 4, 2021.

A Fitch Lane house camera captured video of a black bear wrestling a tree in the back yard at about 5:40 a.m. Sunday. The bear is not the same one who appears to have grown comfortable near humans and whose movements authorities are closely following. That bear, referred to as “number 211” due to the number on the orange state tags on his ears, had been seen killing fawns in northern New Canaan last month and was seen Monday in Armonk, N.Y., officials say.

The selectmen during Tuesday’s meeting approved a $238,700 contract with Matt Ready Construction, Inc. for renovation work at the Carriage Barn in Waveny. Officials said the organization that operates out of the building is contributing $50,000 toward the project. Representatives of Carriage Barn Arts Center said they also have spent $40,000 installing air conditioning.

Finally, the owners of 199 Michigan Road on Wednesday filed eviction papers in state Superior Court, saying the tenant of a cottage on the failed to pay $1,600 in monthly rent from July 2020 through June 2021, records show. The tenant owes $16,300 in total, according to a complaint filed by Stamford-based attorney Mark Sank.