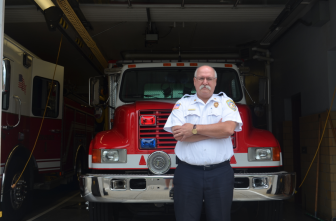 Hired by the town in July 2006, Hennessey has been a “great leader” who is responsible for putting in new systems for budgeting and apparatus management that have helped the department, according to Commission Chair Jack Horner. “Jack Hennessey, God bless him, has served our town stupendously well for 15 years and Jack has been in the fire service for 40-plus years, easily.” Hennessey started in 1978 as a volunteer firefighter in Stamford and became a career firefighter at Turn of River Fire Department in 1984, Horner said. 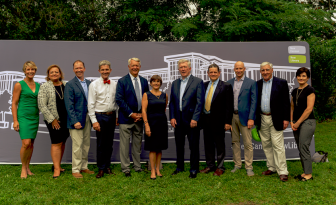 New Canaan Library on Aug. 30 marked the official launch of its building project with a ceremonial “Spade in Ground” celebration.

New Canaan Police are investigating the theft of a bracelet from an East Avenue home. Reported to police Sept. 8, the theft had occurred in July, officials said.

Part of the plan to widen sections of Elm Street sidewalks, approved this summer by the Police and Planning & Zoning Commissions, will go into effect this calendar year, according to Public Works Director Tiger Mann. The sidewalk “bump-outs” on the northern side of Elm can go forward, though there’s “a transformer issue” at the intersection with South Avenue. 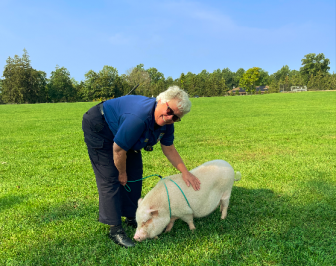 A pet pig named Gilbert stopped briefly in Waveny on Tuesday as his owners traveled through the area on their way upstate.

A motorist was ticketed after passing a stopped school bus on Route 123 in the area of Norholt Drive, according to a report made to police at 5:18 p.m. on Sept. 14. 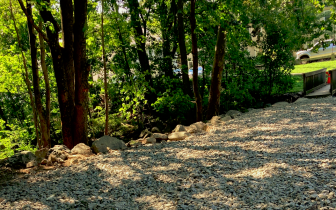 The Department of Public Works this week finished repairing the spillway area on the east side of the footbridge at Mill Pond, damaged by floodwaters during Hurricane Ida.

Police on Sept. 10 received and after-the-fact report of a license plate stolen June 16 from a White Oak Shade Road home. 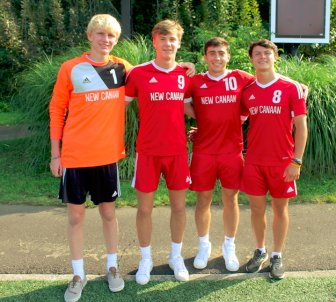 New Canaan High School Boys Varsity Soccer kicked off its season last week lead by coach Luke Green in his fourth season at the helm. Team captains Milan Afshar, Tommy Kurz, Michael Norton and Alex Wolter took the field together with nine returning varsity players to face Danbury’s and Westport‘s annual powerhouse squads ending in tight 0-1 and 1-2 losses. The first week of league games followed the annual scrimmage vs St. Lukes in what fans are affectionately calling the “New Canaan Cup.” It was a decisive 3-1 victory for New Canaan with an early goal from Kurz followed by two in the net off the foot of senior Douglas Gillespie.  The next home game will be  4 p.m. on Friday, Sept 24. at Dunning Stadium.

Car keys found in Waveny were turned in to New Canaan Police at about 7:38 p.m. on Sept. 12 and are being held in property management.