New Canaan Police at 11:52 a.m. on June 8 received a report of a suspicious vehicle in a parking lot at South School. The vehicle had left the area upon the officer’s arrival, officials say.

We’re hearing that the pharmacy in Walgreens on Pine Street has been closed since Wednesday. A post on the company’s website notes the pharmacy’s “temporary” closure (the rest of the store is open), and a note on the door says there are “system issues”: “We are waiting for a tech from Verizon to troubleshoot and can’t do anything until then.” The nearest open Walgreens pharmacies are in Stamford and Norwalk, the sign said.

Referring to plans for apartments at Weed and Elm Streets and on Main Street, First Selectman Kevin Moynihan said during an update before the Town Council on Wednesday, “I don’t think any of those will succeed because they’re not economic. Mr. Karp is not going to build something that is not economic.” He referred to local developer Arnold Karp.

Captain Jack LLC, owner of 32 units in the brick condo complex on Heritage Hill Road, on June 10 filed in state Superior Court to evict a tenant in one of them. The tenant had signed a lease from June 1, 2021 through May 31, 2022 at $2,550 per month, the complaint said. The lease has terminated due to “lapse of time,” it said. In addition, two other tenants who had occupied the apartment starting three years prior, in June 2018, and still reside there, are being evicted since they never had a right to live there, the complaint said. Captain Jack LLC purchased the unit in February 2017 for $330,000, tax records show.

Police at 8:22 a.m. on June 6 received a report of a bat in one of the units at 312 Elm St., the Pride’s Crossing condo complex. The bat tested negative for rabies, police said.

A reminder on Stand Together Against Racism’s “Hearts of Freedom: A Juneteenth Community Celebration” will be held 4 to 7 p.m. on June 19 at the New Canaan Museum & Historical Society. 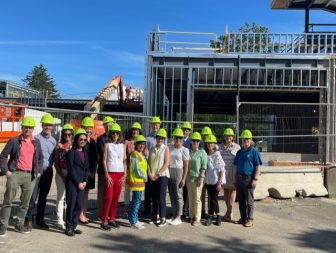 The New Canaan Community Foundation recently announced a new $150,000 multi-year grant commitment to the new New Canaan Library, in addition to an earlier grant of $100,000 during the early design and development phase of the library’s capital campaign. In recognition of the NCCF’s support, the library will acknowledge the organization in naming of the new staff offices.

Police at 3:05 p.m. on June 12 received a report of a wallet stolen from a bag that had been inside the YMCA.

There’s only a handful of shows left: The Town Players of New Canaan’s “Moonlight and Magnolias” is running through 26 at the Powerhouse Theatre in Waveny, ticket info here.